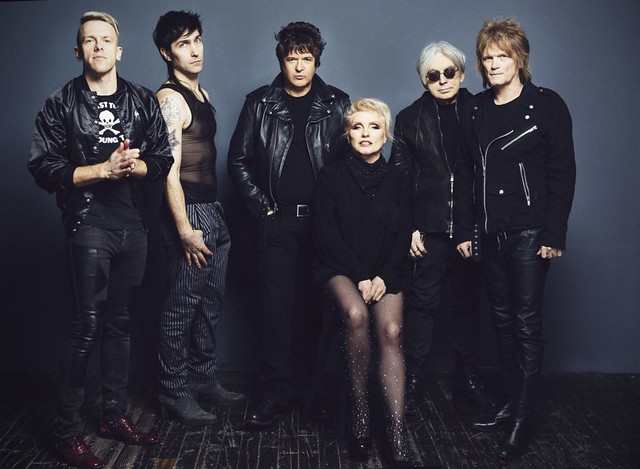 As a boy, I experienced no finer thrill than sitting in front of a boom box with my pile of Blondie cassettes, playing them through and flipping them over to enjoy the hits and dig further into the lesser-known songs. (Why too weren’t these wonderful tunes also hits?) I possessed seven neat matching blue little boxes issued by Chrysalis Records — the band’s first six albums and the ubiquitous Best of Blondie — playing through the band’s exciting and varied mysteries.

One of those wildly alluring and underrated tracks for me was “Detroit 442,” which appears on 1978’s Plastic Letters. It is a raucous song that captures the spontaneity and expressiveness of Blondie’s punk side. The band resurfaced the rarely performed track live for a recent show at The Anthem as part of an initiative to highlight some of these really strong tracks that didn’t receive enough love back in the day. The show was part of a new Blondie tour billed as Against the Odds, named for a comprehensive Blondie retrospective package being released tomorrow.

Blondie: Against The Odds 1974-1982 contains remastered albums and commentary from original members and the producers along with a 120-page discography and a bunch of photos in a massive box, which would have fulfilled the music listening dreams of my young boom box enthusiast self. Today, as a very busy man, I admire my favorite artists from the floors of concert halls rather than in front of a radio, and so it was that my feet carried me to see Blondie play at The Anthem on Aug. 21.

I’ve seen Debbie Harry and company a number of times over recent years, beginning with the band’s reunion concert at HFS Festival in 1997, and they remain an entirely enthralling live act. Today, only Debbie and drummer Clem Burke from the original lineup remain on stage with the band. Guitarist and co-founder Chris Stein is still in the fold, but he sat this tour out on doctor’s orders (hopefully to return one day). In Stein’s absence, Blondie rearranged the lineup a bit and recruited original Sex Pistol’s bassist Glen Matlock as a temporary member of the band. I saw this configuration of Blondie perform at the Cruel World Festival back in May and again at The Anthem here in DC.

Read our review of Blondie at The Anthem in 2019 in our salute to Clem Burke.

At The Anthem, Blondie began the show with “X Offender,” the band’s very first single, and all of the elements of a great show were in place immediately. Debbie stepped to the middle of the stage to deliver the spoken word intro, and she launched steadily and powerfully into the song’s rapid clip of lyrics. Clem Burke, who I’ve long considered Blondie’s not-so-secret weapon, charged in immediately with roiling drums. And one of the delights of catching Blondie live today materialized on the spot: the extraordinary combo of Clem Burke and Glen Matlock in a rhythm section, building melodies and trading riffs. The two highly professional and polished gents were two peas in a pod, and their instruments clicked in a way few other musicians could ever hope to achieve.

Watch the official music video for “X Offender” by Blondie on YouTube:

Blondie diehards were soon promptly rewarded by selections like “Picture This” (from the incomparable Parallel Lines) and “The Tide Is High” (recorded for personal fave Autoamerican). These songs require Debbie Harry in full effect, and Debbie was all business in delivery. She stepped onto the stage with the air of an old-fashioned Hollywood star, clad in a pink jacket and shades. As the show progressed, she removed the shades and metaphorically let her hair down to roar and kick her way through a set of 17 songs.

On the first night of Cruel World, Debbie dropped some lines and lyrics to some songs, allowing the music to sweep over the crowd. That was not the case at The Anthem, where she was 100 percent in force. Her voice was measured and clear; she was planted firmly where she belonged at the front of the stage; and she made a passionate and convincing case for the continued existence of this excellent Blondie touring band.

During the reggae-disco number “The Tide Is High,” Debbie playfully engaged the audience, smiled widely, and danced from side to side, while Clem irrepressibly rattled away behind her. Said audience was a bustling crowd consisting of people of all ages from teens to elders. My own Gen X was in strong attendance in the very full house. And we were all enchanted.

Watch the official music video for “The Tide Is High” by Blondie on YouTube:

Blondie stacked the latter half of the show with just as many favorites — including the distinctive “Atomic” from 1979’s Eat to the Beat and “(I’m Always Touched by Your) Presence, Dear,” flashing back to Plastic Letters. The songs highlighted Blondie’s perennial interest in sci-fi flourishes as well as their studious investment in different sonic textures and tempos. Blondie carried these songs quite well thanks in part to the power of guitarists Tommy Kessler, who has been giving his all as a member of the band since 2010, and Andee Blacksugar of KMFDM, who was recruited for this tour in Stein’s absence. From opposite sides of the stage, these masterful guitarists gave each song an edge. And it was completely charming to see Tommy team with Glen Matlock for muscular throwdowns and an enthusiastic backing vocal coupling.

Revisit that time Clem Burke and Glen Matlock joined a supergroup called SSHH for one night in 2016.

The night was capped by a stellar encore that included a few of the really big hits — “Call Me” and “One Way or Another. They are also two of the most energetic and rallying Blondie anthems. Clem began “Call Me” with a powerhouse drum intro, and Debbie soon crooned into the microphone, somehow making the vast concert space seem very personal. Keyboardist Matt Katz-Bohen sizzled on keytar to Debbie’s right. Tommy and Glen stamped the chorus with their whimsically delivered “Call me” backing vocals. And the whole band sounded as fresh as they did at the start of the show.

Performances like this complete a circuit. My young boom box listening self from 40 years ago would look at my concert-crashing self of today, and he would totally recognize what he saw. Even better: that young boy would completely approve of what he was hearing: the sound of Blondie, the Debbie Harry show, in its wholly realized glory, infusing the rarities with as much love as the chart toppers. And one thing remains certain: I’m up for it as long as Debbie is still there.