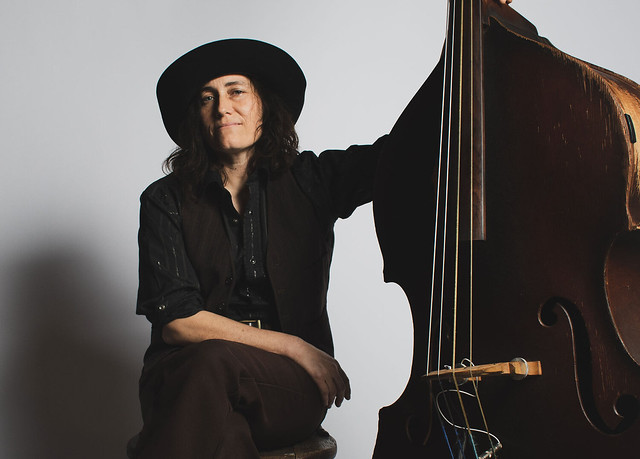 I can relate to Melissa Carper. My partner lives out in Rockville, Maryland, and her apartment is among much green space, and there are many animals around. We often stop to watch rabbits or dear. On Sunday, when we came back from brunch at Silver Diner, a fawn was just off to the side of parking lot, munching on leaves, displaying no fear or anxiety of us humans. For all the craziness and the edge in our personalities, we are soft, gentle souls; on her dating site profile, my partner said the job she would do for no pay was taking care of an orphaned elephant.

Melissa Carper is another weirdo with a heart of gold — and a thoroughly wonderful one, judging from her recent appearance at Pearl Street Warehouse. “Would You Like To Get Some Goats,” a song that appeared in the setlist, wasn’t actually about her dream — it’s about a ex-girlfriends’ dream. Goats, Melissa said during the show, are “a little high maintenance.” She does want to live on a farm of her own some day. For now, she lives on someone else’s farm, which she says is “okay.”

Star Trek isn’t the first place you’d think you’d hear a country song, but one of Melissa’s songs, “Making Memories,” appeared on the series Strange New Worlds, which has received critical acclaim, and it is definitely on my list to watch. (Dolly Parton, who is a clear vocal influence on Melissa, has guest-starred on The Orville, which is heavily influenced by Star Trek: The Next Generation, so there is a welcome trend for you).

Originally from Arkanasas, Melissa has wandered far and wide, which has been the subject of many of her songs, like “Ramblin’ Soul.” Her time in Texas gave birth to “Texas, Texas, Texas.” The title track of Arkansas Bound pays tribute to her home state; she lives in Nashville now. Like many musicians who make their living on the road, she’s become emotionally attached to the vans she’s used to get to gigs. Her set included “My Old Chevy Van,” and another van song about her first, a brown 1980 Dodge.

Now that she lives in Nashville, she can take advantage of the vast musical community there to cowrite songs. “Billy and Beaux” was cowritten was Brennen Leigh, and deals with love between two men in a place where that’s not usually talked about. Leigh recorded it on her album Prairie Love Letter in 2020.

Melissa brings some unusual traits to the mix. She’s a queer artist, and she’s a bassist who sings; most artists, when they decide to front, go with the guitar. (The only other bassist I’ve seen singing lead is Kansas City-based blues artist Danielle Nicole.)

All of that notwithstanding, there’s a lot of very traditional stuff here. The set was full of romantic ballads and heartbroken lullabies: “Many Moons Ago,” “Almost Forgot About You,” “Why Can’t Back When Happen Again,” “That’s My Only Regret,” “From What I Recall,” and “Ain’t Gettin’ Lucky Tonight.” The lone cover of the evening was a very affectionate performance of John Prine’s “I Just Met My Love Today.”

Melissa made sure to send us home with a little peace and serenity, playing “Zen Buddha.” It’s classic country music, with a unique personality, and it’s all heart. If you’re looking for new music with a lot of heart, you may find a home with Melissa Carper.