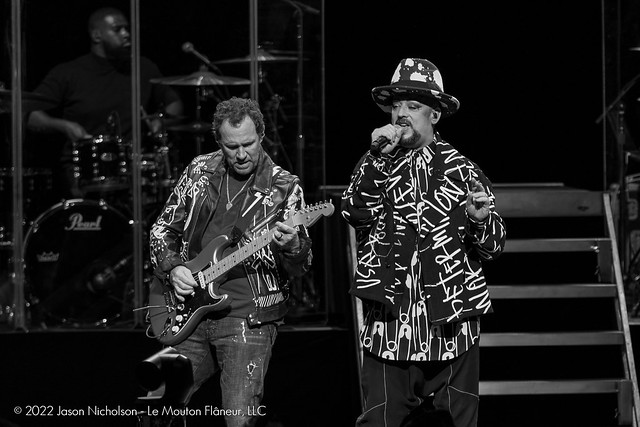 Dave Wakeling wrapped a performance of “Tenderness,” originally recorded for his former band General Public, and he paused a beat before addressing the audience on a recent warm evening at the Filene Center at Wolf Trap.

“Very political times, the 1980s,” Dave said. “Politics showed up in a fair bit of music. It seems like The Beat and UB40 were going on about it all the time! But interestingly, 40-odd years later, George affected more social change than any of us — not by singing about politics but just by being George.”

“That’s one of the reasons I’m so happy to be on these shows right now,” Dave added.

The George in question, of course, was none other than George Alan O’Dowd, better known as Boy George, and the shows in question were The English Beat’s opening run for Culture Club for a few dates last week. And Dave Wakeling was right. But just as critically, Culture Club and The English Beat, two pop music giants of the ’80s, made for a very grand night of music.

After being insightfully and appropriately lauded by the wise and witty Mr. Wakeling, Boy George (vocals), Roy Hay (guitar, keyboards), and Mikey Craig (bass) took the stage for a wildly entertaining evening of music as Culture Club on Sept. 1. (Missing was drummer Jon Moss who recently departed the band under a cloud.)

Culture Club delightfully relaxed and unwound on the large stage of Wolf Trap’s Filene Center, playing through a set of 18 songs that included some surprising covers — “Sympathy for the Devil” by The Rolling Stones — and not so surprising covers — “Get It On” by T. Rex (long a known George fave).

More surprising and pleasing than any cover tune, however, was the introduction to DC area of four new Culture Club songs that have not yet been played too often. Culture Club opened with one of these songs — the summery “The Next Thing Will Be Amazing,” which the band debuted live in San Diego during the month of June. The celebratory lyric struck a knowing tone for the very forward-looking Culture Club, and the song served as a terrific showcase for George’s deeper and bluesier voice of today.

Watch a visualizer of “The Next Thing Will Be Amazing” by Culture Club on YouTube:

No Culture Club performance would be complete without some show-stopping classics, naturally, and the biggest of them all was “Karma Chameleon” from the band’s smash album 1983 Colour by Numbers. George and company performed the song in the encore between The Rolling Stones and T. Rex covers, and it ensnared the audience from the instantly recognizable opening guitar riff by Roy. Mr. Hay remained an MVP, moving deftly from guitar to keyboards and brimming with chemistry and affection for his bandmates. It was as always a pleasure to see him perform.

But George, eh! From the moments I saw “Karma Chameleon” and its clever Mississippi riverboat casino video setting on MTV in 1983, I was hooked. Speaking for myself, George’s talent and appearance went a long way toward normalizing androgyny and gay sexualization in mass media. (He was truly ubiquitous for a time there, wasn’t he?) My enthusiasm for his music was so complete that I never bothered with questions about George’s orientation or why he dressed the way he did. He knew who he was, and that was a-OK in my book. After all, the powerful Annie Lennox was a woman who often wore traditional male clothes, so why couldn’t George, an equally exceptional entertainer, dress in a traditionally feminine style as a man?

As Dave rightly said, George was just being himself — and he was delightfully himself at Wolf Trap for sure. I believe his influence was powerful for the acceptance of subcultures and tribes different than our own for my fellows in Generation X. He deserves more recognition for this in my opinion.

Watch the official music video for “Karma Chameleon” by Culture Club on YouTube:

From the classic albums, Colour by Numbers dominated the set with five selections, including the charming “It’s a Miracle” and the heartbreaking “Victims” — still the most devastating drop beat ever heard on pop music radio!

Culture Club also played songs from Kissing to Be Clever, including “Time (Clock of the Heart)” near the end of the set. Bassist Mikey Craig was a superstar throughout the show, and the songs at the end of the set really crystallized his funk and calypso vibes. During “Time,” for example, he was a groovy counterbalance to George’s gentle swaying, looking dashing in a Caribbean hat and islander pants. I suspect too that Mr. Craig is partially responsible for Culture Club’s expansive sound — a little salsa mixed into “I’ll Tumble 4 Ya” and the super reggae in their cover of “Everything I Own” by Bread.

Without Jon, Culture Club traveled with a truly impressive backing band, but a tremendous stand-out was an amazing backing singer — Roxy Yarnold (ed: Thanks for identifying her, readers!) — who completely killed it during “Church of the Poison Mind” — which the band brilliantly mixed with Wham!’s “I’m Your Man,” by the way. Roxanne stunned all around, and I have to predict we will see some solo projects soon.

Getting back to the beginning of this review, Dave Wakeling and The English Beat were in fine form as openers, breezing through seven wonderful tunes including their best-known USA hits “Save It for Later” and “Mirror in the Bathroom.” The congenial frontman was assisted abely in this endeavor in particular by his relatively new and excellent toaster Antonee First Class. In a classic Wakeling quip, Dave introduced Antonee as a man “straight out of” New York City, London, and Kingston, Jamaica! “Three flavors all at once for any ladies who would like a taste,” Dave grinned before adding, “But he’s too nice to talk to!” Cue another terrific song by The Beat and a very spectacular show overall at Wolf Trap!

Here are some photos of The English Beat performing at Wolf Trap on Sept. 1, 2022. All pictures copyright and courtesy of Jason Nicholson. 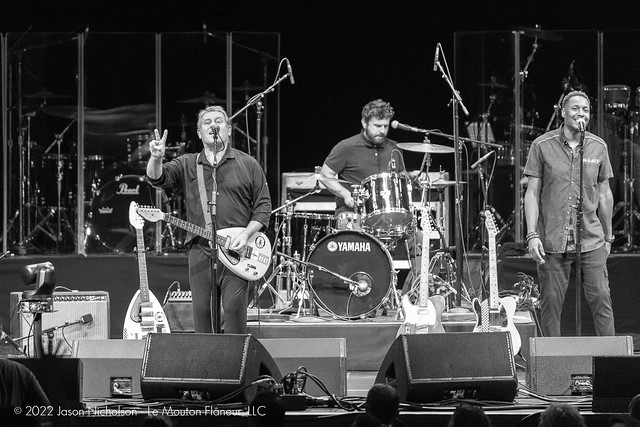 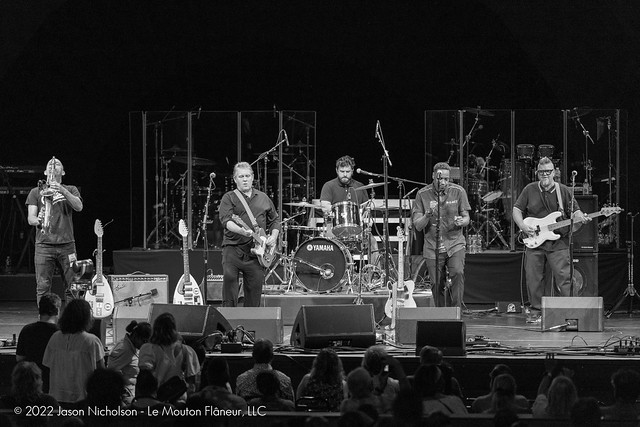 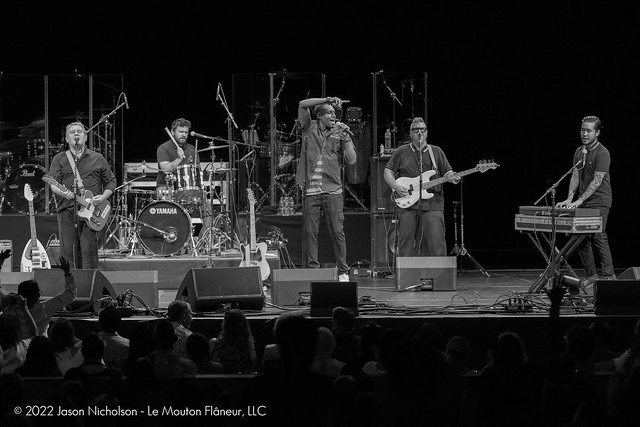 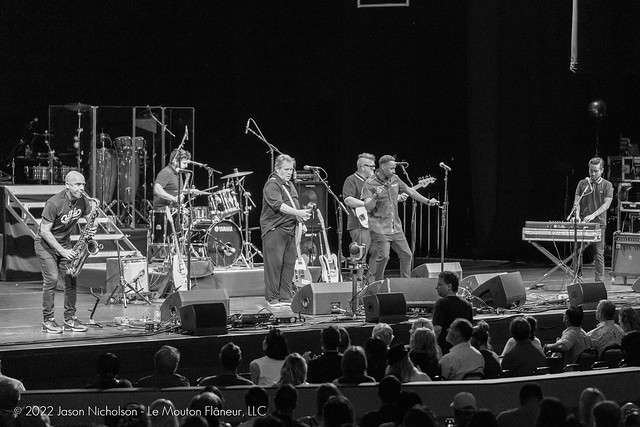 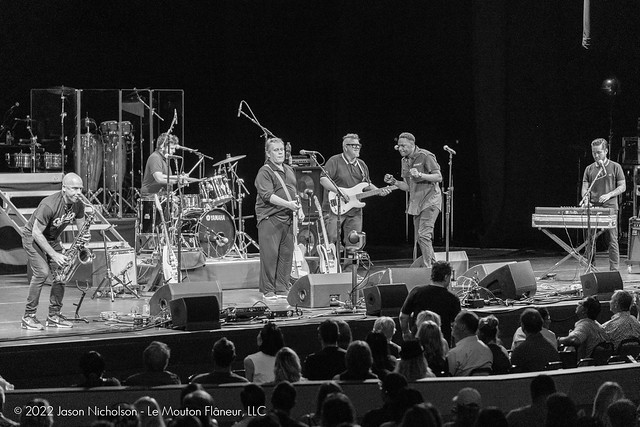 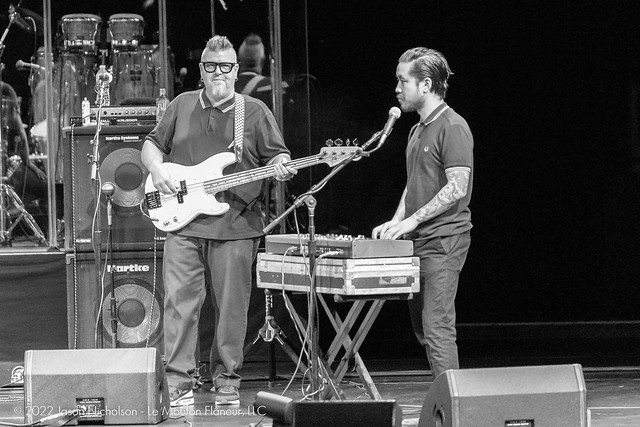 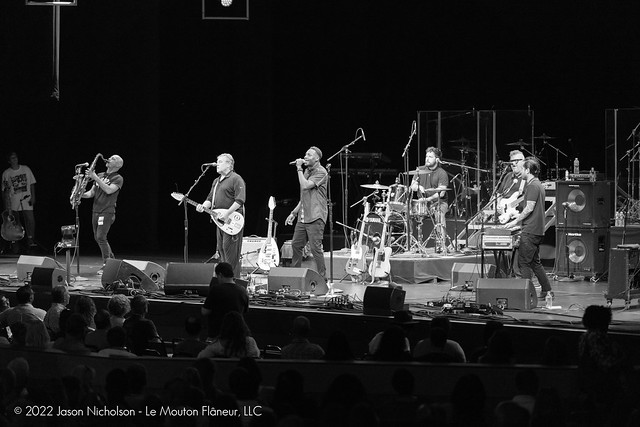 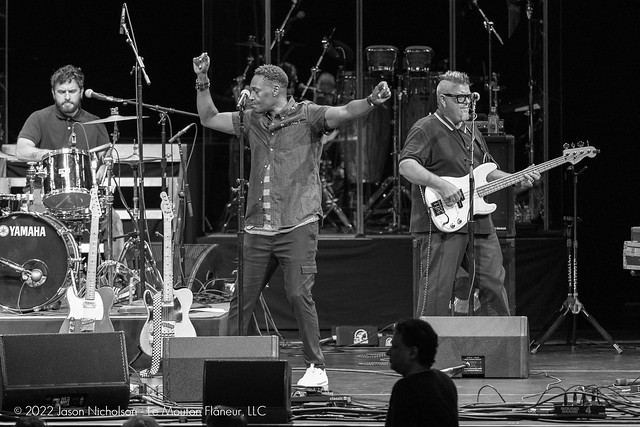 And here are some photos of Culture Club performing at Wolf Trap on Sept. 1, 2022. All pictures copyright and courtesy of Jason Nicholson. 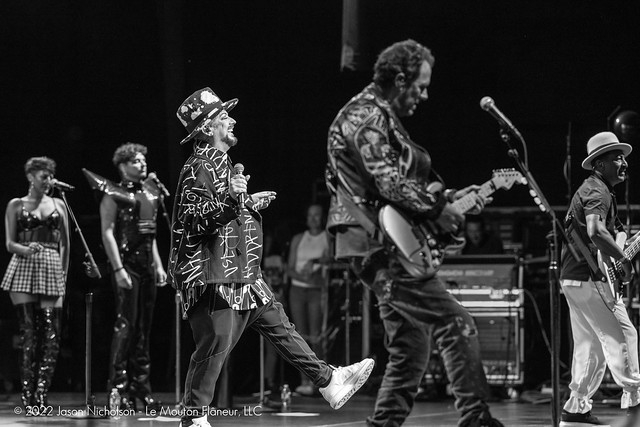 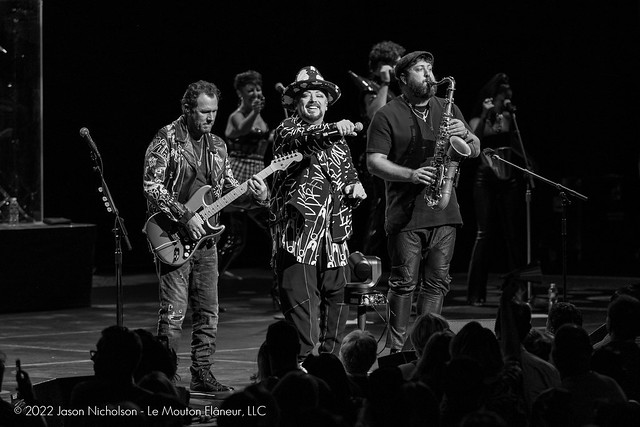 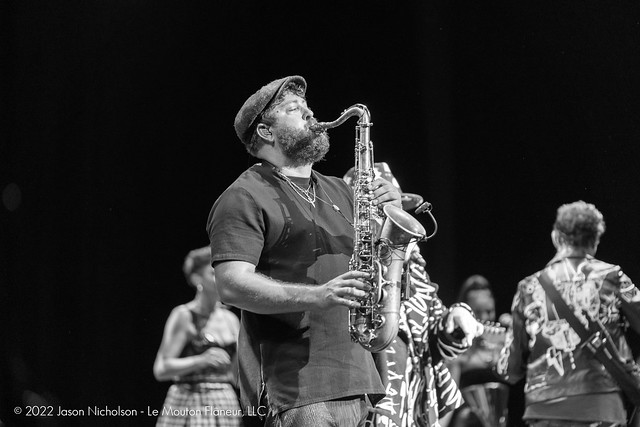 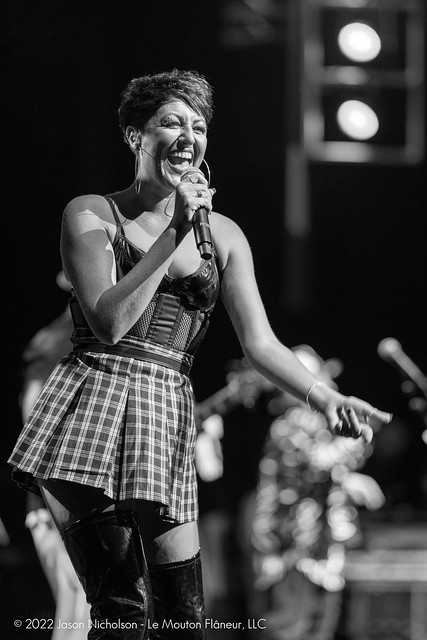 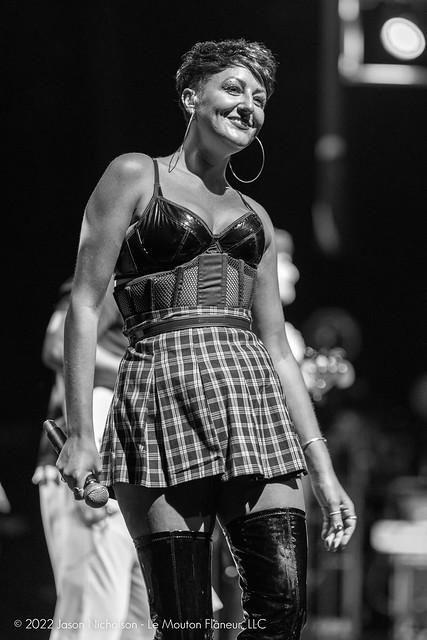 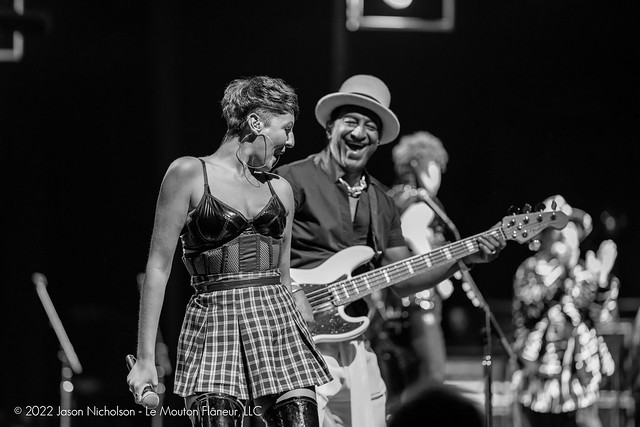 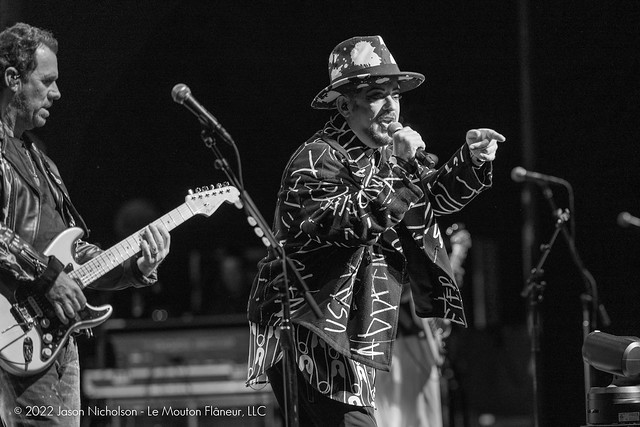 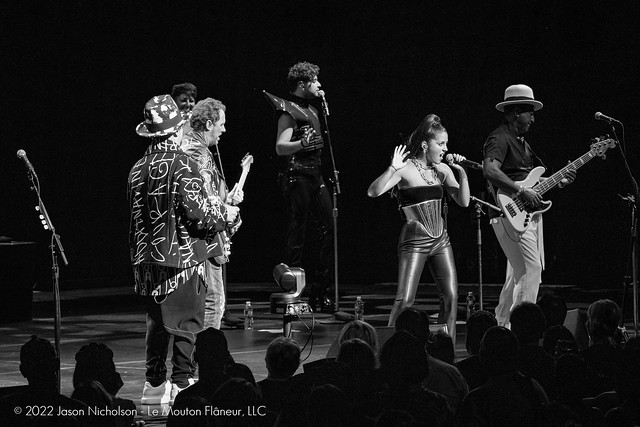 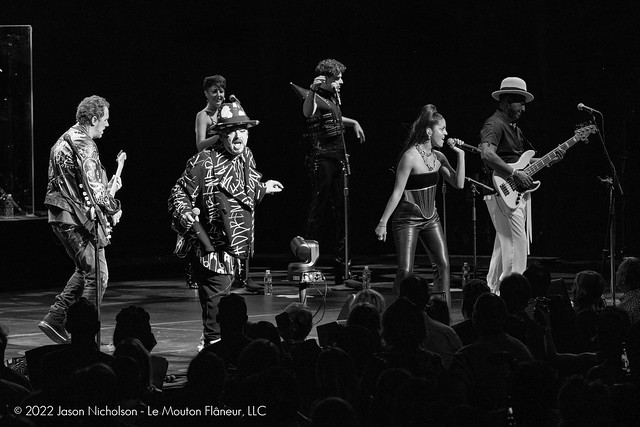 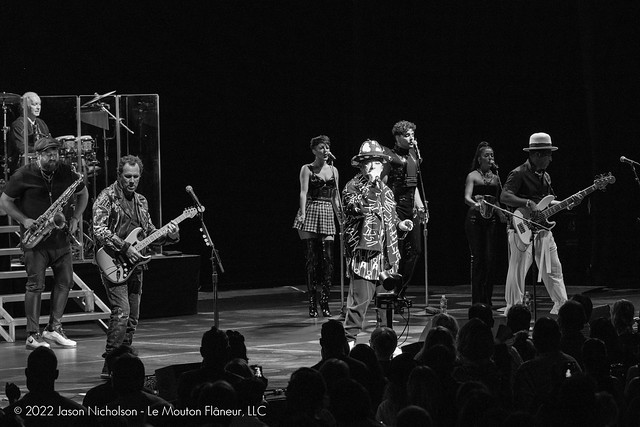 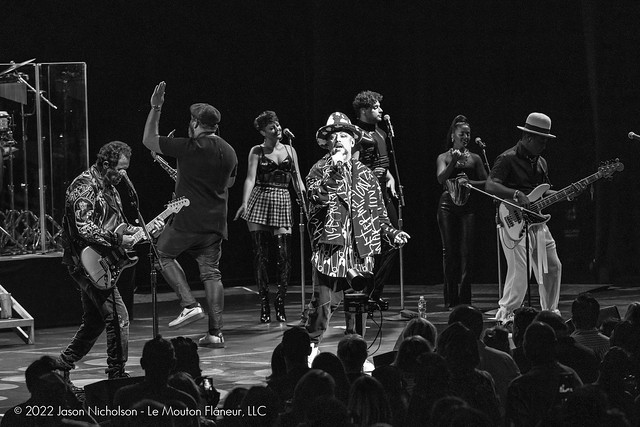 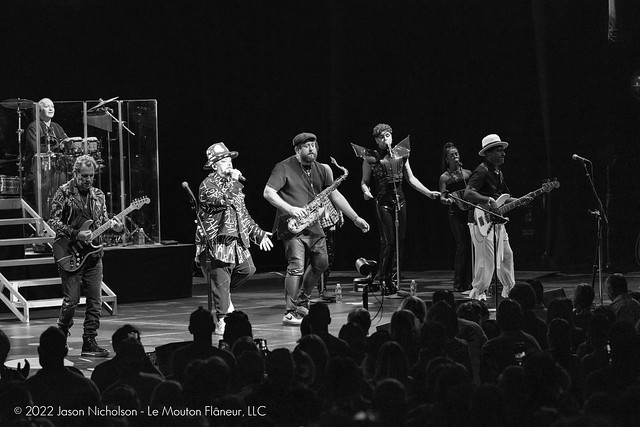 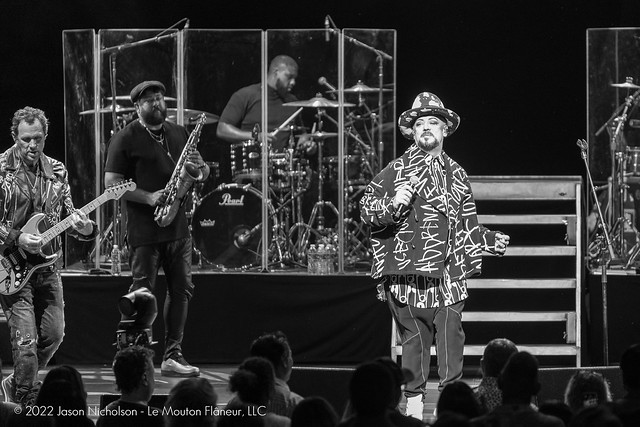 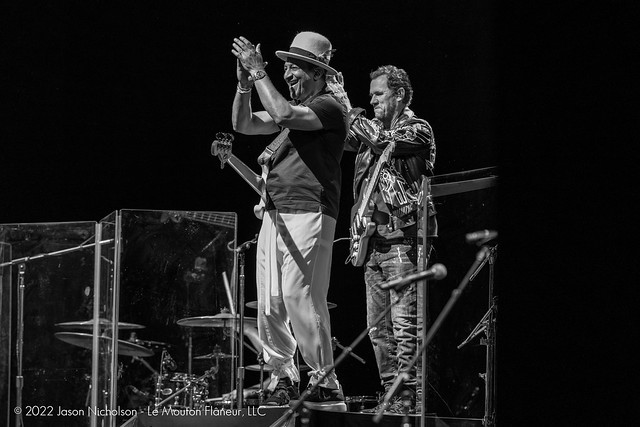