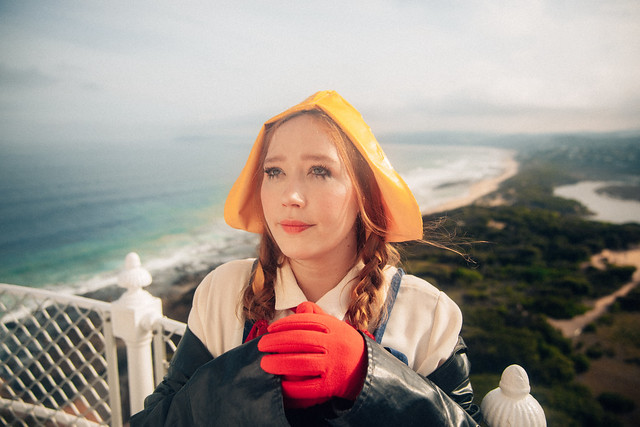 Australian singer-songwriter Julia Jacklin walked onstage at the 9:30 Club recently to Celine Dion singing “My Heart Will Go On.” “Just having a bit of fun,” she told the audience, who had come to see the native of the Blue Mountains’ first North American tour since before the Covid pandemic hit. The joke, of course, is that deep emotional conflicts and introspection in Jacklin’s lyrics contrast so powerfully with the cheap emotional string-pulling of a love theme engineered for the blockbuster Titanic.

Jacklin released her third album, PRE PLEASURE, just a few weeks ago, and it’s deservedly received excellent reviews. The album comes three years after her sophomore LP, Crushing, a record which brought her a larger — and, she has noted — a younger audience. The album deftly mixes indie- and country-rock in ways that both leads back to Neil Young. And the confessionalism in the lyrics is more like another Canadian, Joni Mitchell. At 9:30 Club on Sept. 15, much of the set drew from this material, beginning with the second number, “Be Careful With Yourself.” In the song, she asks a lover to stop smoking, that they might have as much time together as possible. It’s a relatable sentiment for anyone who’s ever loved someone who had a harmful addiction.

“Love, Try Not To Let Go,” another cut from the album is about trying to hold on. The spare, folky “Less of A Stranger” (performed solo at the beginning of her encore) certainly sounds autobiographical, as though it’s about the relationship between Julia and her mother. But it’s important to remember that songs are often written from the perspective of a character, and the “I” of a song may not be the writer. “Moviegoer” is a slice of life, full of concrete, absorbing details that put you right inside a trip to theater. The set also included the album’s first track, “Lydia Wears Across,” “I  Was Neon,” and the encore closed with “End of A Friendship.” Before playing that last one, Julia noted that the band (accidentally, I presume, because intentionally wouldn’t make sense) left the chimes normally used during the song in Nashville.

Watch the official music video for “I Was Neon” by Julia Jacklin on YouTube:

While there was lots of the new material, Julia made sure to include some old favorites, too. Her breakthrough, Crushing, dealt with relationships and intimacy, and, at times, uncomfortable issues of the body. She started the set by coming out alone to play that album’s closing number, “Comfort.” Before “Good Guy,” she told the audience she’d had a “pretty American day yesterday. Went to Walmart. Went to Dick’s Sporting Goods. Bought a single dumbbell, 15#. Ate mac n cheese.” She asked rhetorically, “Are there different kinds of mac n cheese?”

Other tracks from the LP in the set included “Don’t Know How To Keep Loving You,” “Head Alone,” and the conflicted “Good Guy.” After the challenging body, a member of the audience passed Julia a vinyl copy of the original cast recording of Jesus Christ Superstar. The production is of special personal significance to her, as she attended Catholic schools and she was in stage productions of it and Joseph and the Amazing Technicolor Dreamcoat. She ended the main set with “Pressure to Party.”

There were even a few songs from her debut record, Don’t Let the Kids Win: “Pool Party” and “To Perth,” which reference her native country. Julia was in great voice, and her band was excellent. Her bassist, Mimi Gilbert, opened the show with an excellent 30-minute set of electric and acoustic solo numbers that drew an enthusiastic response from the audience. Her debut album is out next month.