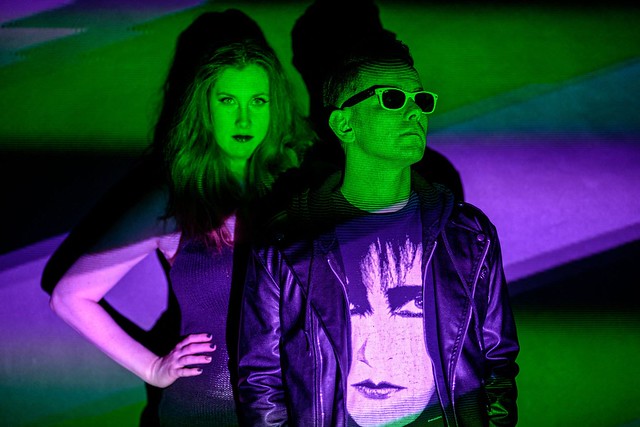 Technophobia is the fear or dislike of advanced technology or complex devices, especially computers, says Merriam-Webster.

Technophobia is also a DC-based synth duo, husband and wife Steve and Katie Petix, who are hitting some stages this season after retooling a bit this year. They are less afraid of technology than Merriam-Webster would suggest.

Gone is former lead singer Denman Anderson (who amicably relocated to New York City) as well as the band’s catalog of songs. With Katie now taking over on vocals, Technophobia recast and made their first local appearance as a duo rather than a trio as the opening act for Laibach at the Black Cat on May 11.

I wasn’t there, but by all accounts, the show went well and our darkly dynamic duo made a splash with their new debut. They are recording new songs with intent on releasing them commercially in the near future.

Meanwhile, the next DC performance by Technophobia is slated for Thursday, June 11 at DC9, where they open for Richmond’s Ki:Theory. They share opening act responsibilities with nu disco acolytes Pleasure Curses. These are three different flavors of synth acts that I suspect should blend well together.

If you prefer your electronic music thoroughly darker, Technophobia are happy to oblige you there as well with a show at the Black Cat on Sunday, August 9, when they join doom and gloom electronic bands Citadel from DC and Curse from Baltimore.

Technophobia haven’t posted any of their new music online yet (Spotify has confused them with a similarly named ambient techno band Techno Phobia, it seems), but we’ll point you to some places where you can check out the band’s retooled sound when some songs come online.