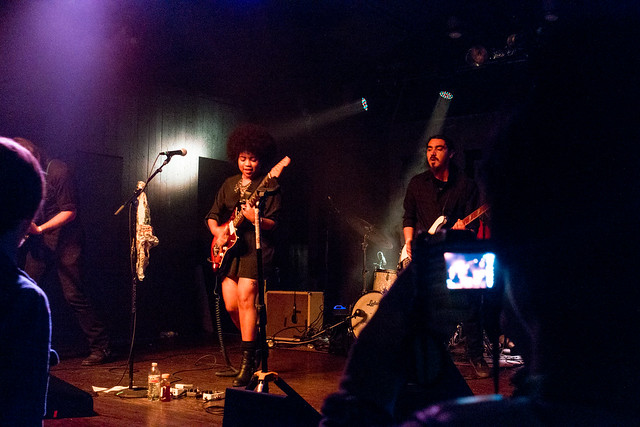 The Seratones hail from Louisiana and that seems to have influenced their sound quite a bit. They are from a part of the country where music is huge and being nearby Memphis and New Orleans has clearly had an impact on their sound. Mark my words, this group is going to develop a big following over the years to come. They have only been together since 2013, and they have a sound that is just going to draw more people in as they listen to them.

Take a listen for yourself:

One thing I can say for certain is that AJ stole the show.

Don’t get me wrong, this band is more than just AJ’s vocals, but seeing them live is when she really stands out. Her energy and sense of fun permeated the room as she sang. I’ve noticed that some musicians seem to get more energized the longer they play, and she is one of them. By the end of the show, she had put her guitar down and was dancing around the stage. She then came into the audience with her mic. And she got back on stage and then again came back through the audience, this time dancing and even playing jump rope with the mic cable.

It didn’t stop there — AJ went right up to the bar and leaned over, singing at the bartenders. She swung from the ceiling, danced with audience members, and ended the show by going through the crowd, dropping the mic, and walking off into the dressing room. Talk about a performance!

This show by the Seratones is up there with some of the best shows I have seen. That’s the beauty of seeing a band in a small venue when they are still on the rise. Some more well-known musicians might get mobbed if they performed that way. Somehow though, I think AJ will always do that sort of thing even as the group gains popularity. It’s the way she is, and it’s what makes the Seratones who they are.

I wish I had known about bands like this when I was a high school kid convinced that classic rock was basically the only good rock music. Back then (as naive as it may have been), I didn’t think anyone could create new music that would compare to the likes of Led Zeppelin and AC/DC. If you had popped “Get Gone” into a CD player and told me it was released in the ‘70s, I would not have questioned it.

The Seratones seem to be in it for the love of the music, and I’m betting we will see them again soon.