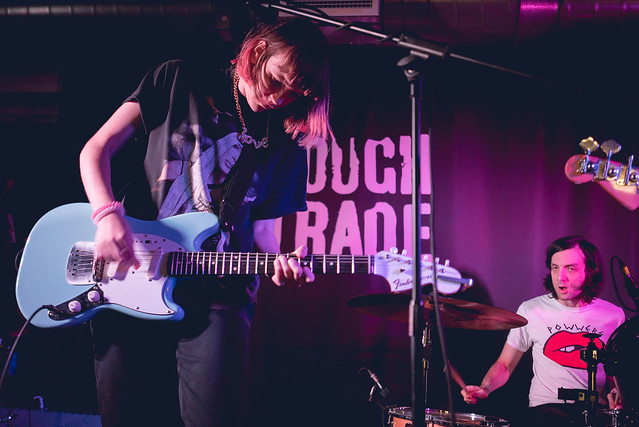 Poised and constantly in motion before a back-drop of giant looming hands descending from the sky, Katie Monks, lead singer of Dilly Dally, drawled and burned through nine grungy songs about desire and heartbreak.

In “Candy Mountain”, but elsewhere too, Katie’s voice pierced through the mood and morphed between a scream and a growl. She confided that “This day is crazy, I got all the feelings.”

On the highly head-nodable “The Touch”, Benjamin Reinhartz crushed the intro and all the beats with his drums (the song was the highlight of their set) and brought the crowd, still pouring in, finally from their reverie and fully into the performance (at least for me).

The other members of Dilly Dally are Liz Ball on guitars and Jimmy Tony on bass, and the band’s sound was a throwback to the wiles of grunge over two decades ago, which certainly resonated with the angst of the day.

Much to my amusement which majestically transformed into annoyance, the person in front of me tried to capture videos while moving to the beat of “Ice Cream”, while having zero ability to focus or point the phone in the correct direction. I got motion sickness watching this play out, while Katie crooned about “cryin’ cryin’, no one’s listening to you girl.”

Despite the outlying mood, Dilly Dally seemed eager and excited to perform in DC and open for Grouplove.

They recently released an EP, which remixes some of the songs from their debut album, Sore.

When Katie’s voice curled into a growl, it was sometimes hard to make out the lyrics, but with songs like “Purple Rage” and “Ballin Chain”, there was a melodic and fiery energy, where the voice and music complemented each other to good effect.

They ended their set with “Desire”, a slow-moving but poignant ode to the fire of want.

Check out their album Sore, and be on alert for Dilly Dally the next time they come through DC. Hopefully on a day not punctuated by despair. I’d repeat all the laments about a certain president-elect, but this is a family-friendly space, right?