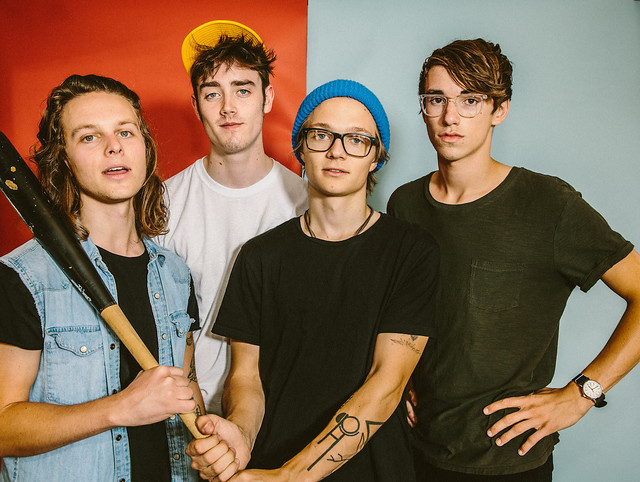 I was out of town when Saint Motel played at the 9:30 Club in October 2016, but I returned to hear plenty of buzz — buzz for opening act Hippo Campus, that is!

The indie rock quartet from St. Paul, Minnesota, charmed a bunch of new admirers in that opening stint, and now they are circulating on a headlining tour that includes a stop at the Black Cat on Wednesday, March 29.

Hippo Campus recently released third single “way it goes” from their upcoming album, landmark, due Feb. 24. (And in doing so the band confirmed it really likes titles in lowercase letters.)

Watch the official music video for “way it goes” by Hippo Campus on YouTube:

Vocalist and guitarist Jake Luppen of Hippo Campus reflected on the new song in a statement: “Set in early spring on a frozen lake in Cumberland, Wisconsin, ‘way it goes’ was a moment of clarity; a realization that we are comedy. We exist in a world where our main news source is a social media website. Materialism is our dogma. We seek to control the way our peers perceive us. We engage social issues as a backdrop for our personal drama. It’s the rare moments when we can escape from this artificial reality, that really matter.”

Hippo Campus’ landmark will be the first full-length album from the band after several well-received EPs over the past few years. Catch up with them at the Black Cat to hear what all the buzz is about!