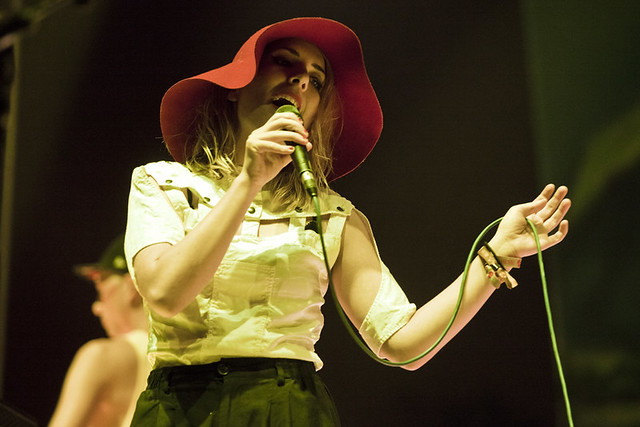 Katie Stelmanis of Austra sings at Vida Festival 2014 in Barcelona on July 5, 2014. (Photo by scannerFM)

“This is an appropriate place to play this song,” suggested Katie Stelmanis at the Black Cat in DC on Saturday.

And perhaps it was good timing for her song “Future Politics,” the title track from the third album by her band Austra, released last month via Domino. “I’m never coming back here/ There’s only one way/ Future Politics,” Katie sings with her voice full of crisp treble.

Austra’s show is not an overtly political show, but Katie was inspired to write the new album as a call to move forward. Practically, with its keyboards and electronic drums, Austra sounds like they dropped freshly into the current times from the 1982 European music charts, looked around, and went straight to work.

The rest of the band consists of Maya Postepski (drums), Dorian Wolf (bass, synth), and Ryan Wonsiak (keyboards). Together, their music is a pleasing synthpop blend that never gets too thumpy or spikey to call “dark.” The Austra show plays out like a cool soundtrack to a compelling science fiction movie.

For example, about halfway through, Katie sings “Gaia,” a new song apparently about taking better care of the earth. Her soaring voice floats high while drummer Maya sings a backing chant sotto voce. The affect is futuristic but also uplifting and a bit foreboding all at once.

“If you kill the ground you walk on/ Nobody will take you anyway,” sings Katie in the “Gaia”‘s refrain in defense of “the physical world,” and again you have the sense of something mysterious but knowable.

Toward the end of the set, the new material continues to captivate with “I Love You More Than You Love Yourself,” a wake-up call of sorts to someone who cannot feel good about anything. Maya’s fantastic electronic drums form the backbone of the song while Dorian and Ryan’s synths swell with an appropriate undercurrent of sadness.

Katie’s voice is a bit haunting and the band produces ethereal sounds to reinforce the sense of loss and distance. Austra being Austra, however, the melodies eventually soar into a comforting synthpop flight, more soothing than sad.

Older material dominates the end of the set as Austra close out and return for an encore that puts the focus on first album Feel It Break from 2011 and second Olympia from 2013. The one-two punch of “Painful Like” and “Hurt Me Now” from Olympia certainly end the show on a familiar if less optimistic note. However, the sizable crowd gathered for the show found space to dance in the heavier synth sounds of both songs.

Austra continue their tour tonight, Feb. 1, in Atlanta, and press across the country to wrap things up in Detroit on Feb. 19. Synthpop aficionados who’ve never seen Austra previously, such as myself, will find a lot to like particularly in the new album. And those who already know Austra will find a heartening change in direction, still tethered to the band’s fundamentals, in the new songs, which tend to play out in brighter patterns. In either case, you’ll find something to soothe your soul at an Austra show.