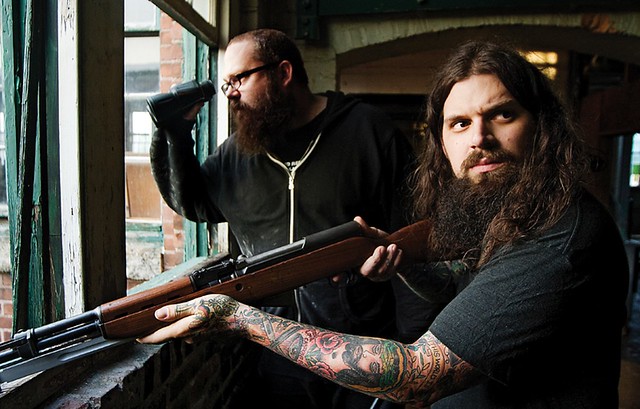 The Body (Photo courtesy the artist)

Portland experimental metal duo The Body have been pretty active lately, publishing No One Deserves Happiness, their fifth studio album, in 2016 via Thrill Jockey. The Body are visiting Black Cat on Monday, Feb. 27 to perform a benefit show for Planned Parenthood.

Chip King (guitars, vocals) and Lee Buford (drums, samples) started out in Providence, Rhode Island, in 2004 before moving across the country, releasing five full-length albums and another of collaborations and becoming particularly prolific since 2010. Last year, they immediately followed up their full-length with a collaborative EP with Full of Hell titled One Day You Will Ache Like I Ache.

Listen to No One Deserves Happiness by The Body on Bandcamp:

“Pop and metal have more in common than diehards of both would prefer to admit, and one is both rely heavily on structure and tight performance. The Body aren’t improvisatory live, but they don’t play it straight like most metal bands do either, putting it all into an endurance test that’s made them both the heaviest live metal act and guaranteed death for punk houses’ electrical systems,” said Andy O’Connor on Pitchfork in reviewing The Body’s latest album.

The Body are joined by a number of DC bands for the Planned Parenthood tribute, with a portion of the proceeds from the door going to benefit the women’s health organization in a show produced by Ripping Headaches.