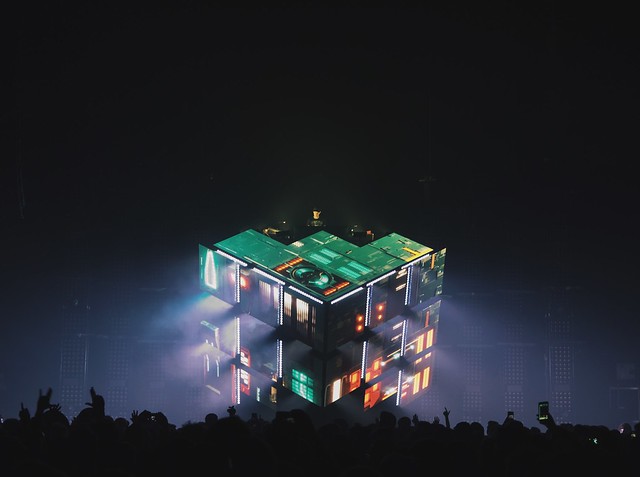 Appearing on his “lots of shows in a row” tour, Deadmau5 performed from his “2.1 cube,” a massive, two-story, LED cube with special reinforcements. The special requirements limited the number of venues available to host his show. There was a huge age range in the crowd to catch sight of the trance music icon from infants to ancients… and boy was it a show.

He began the night with somber sounds alongside smooth bass ballads. The spring night was heating up as Deadmau5 started to combine elements of partnering tracks with an emphasis on BASS. It was a heightened feel throughout the Pavilion as it the night was rapidly inclining and then nightmares became reality… as unfortunately, Deadmau5 hit some technical difficulties.

Sympathies to Deadmau5 during his first technical difficulty on April 8:

The first snafu brought his DJ set to a brief halt, but he continued to perform. Deadmau5 proceeded to make the crowd chuckle with a few of his statements during this frustrating time. He insisted this is what nightmares are made of and even offered to sing us a melody. The icon would get everything sorted out after about five minutes and everyone had their dancing shoes on again.

Deadmau5 began his set with “Imaginary Friends” from his eighth studio album W:/2016ALBUM/, released last year via his own mau5trap label. He soon improvised with an acapella version of “Three Pound Chicken Wing” and “Beneath with Me,” combining two more recent highlights from his discography.

The Toronto superstar hit other highlights including a medley of his signature tunes “Ghosts ‘n’ Stuff” and “Moar Ghosts ‘n’ Stuff” from his 2009 album For Lack of a Better Name. Deadmau5 soon hit “2448” and “Snowcone,” crowd pleasers from his latest album as he dashed toward “The Veldt,” his opus from 2012’s Album Title Goes Here, and he closed with “Strobe” from For Lack of a Better Name.

Washing rhythms cleansed out memories of the technical difficulty that left us in awe previously. Deadmau5 was showing us some of the tricks of his new Microsoft touchscreen interface during an enchanting mix brewing with his classic melodies and then he experienced another “nightmare.”

I have to give this set this rating solely due to the technical errors and with that in mind it would’ve definitely been higher especially had it only occurred once. Overall, though this is a performance I will remember for life, and I think Deadmau5 showed all his sides in this set. One for the books!

See you on the dancefloor! — Jasper of EDMit it