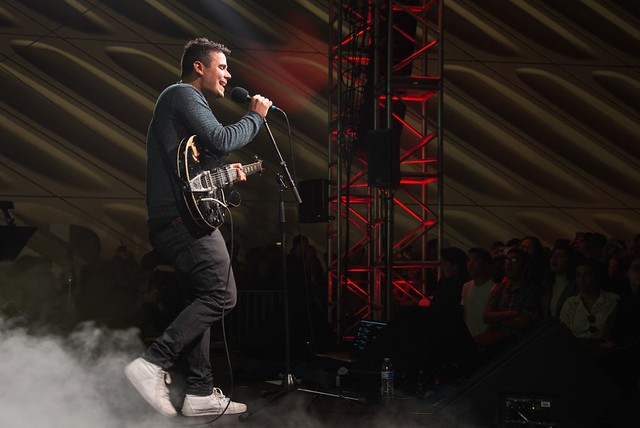 Rostam Batmanglij has a sometimes lengthy songwriting process. The former member of Vampire Weekend can sometimes work up a concept and then revisit it and revise it months and months later.

In the case of “Gwan,” his most recent single, Rostam drew it up as sheet music some time ago before sitting down to refine it. Now it’s one of his favorite songs to play live. And play it live he did to an attentive gathering at 9:30 Club on May 2.

For those familiar with Vampire Weekend, “Gwan” isn’t a big departure for Rostam as a solo outing. It’s extremely mellow and lowkey, even more so than the typical Vampire Weekend number, but it still has that comfortable resonance tinged with soulful electronics. Rostam performed Gwan to close out his set prior to an encore last Tuesday.

Watch the official music video for “Gwan” by Rostam on YouTube:

Rostam is ramping up for the release of a full-length debut solo album due later this year. The news of a solo album came as no surprise to those of us who know Rostam as he is a prolific contributor, and it was only a matter of time once he departed Vampire Weekend before he published solo material.

Indeed, Rostam has been releasing singles carefully since 2011, when he first dropped “Wood,” a song he reissued last year. Rostam began his 9:30 Club performance with the song, a light, airy number with percussive flavors of Vampire Weekend’s brand of Afropop. In concert, he was backed by a string quartet, placing his songs in a soothing chamber pop setting.

Rostam demonstrated an interest in reviewing his career to date, breezing through a very accessible mix of 15 songs, each of which was introduced with a title screen onstage. Flashing back again to 2011, Rostam performed “Don’t Let It Get to You,” which he initially posted on Soundcloud that year. Chronologically speaking, the song became one of the first feel-good, easygoing tunes from the Persian multi-instrumentalist, who hails from DC originally. Like many of Rostam’s songs, “Don’t Let It Get to You” is a gentle reminder to be persistent but true to yourself.

In 2009, Rostam collaborated with Wes Miles of Ra Ra Riot to form a band called Discovery, which released an album titled LP. Rostam touched on that experience last week as well, performing “It’s Not My Fault (It’s My Fault)” from that album. The song is one of several where Rostam is joined by Jack Grabow, the interpretive dancer that appears in his video for “Gravity Don’t Pull Me” in March 2016, which Rostam performed next.

As one would hope, Rostam added a song from Vampire Weekend to his set, playing “Young Lion” — no surprise as he was the sole songwriter for the contribution to Vampire Weekend’s 2013 album, Modern Vampires in the City.

In his encore, Rostam brought out his opening act Angel Deradoorian, with whom he has a long musical partnership dating back to her time in the Dirty Projectors. Angel provided backing vocals most recently to a song on Rostam’s album with Hamilton Leithauser, last year’s I Had a Dream That You Were Mine. On Tuesday, Rostam and Deradoorian sang “Only Ever Wanted to Hold You” together while Jack provided some more interpretive dance.

During his show, Rostam mentioned that he completed his solo record but then revamped it in response to a friend who listened to it and suggested it needed something more. Therein lies one of Rostam’s strengths — his capacity for listening, which undoubtedly makes him in demand as a collaborator. We’ll undoubtedly enjoy listening to Rostam again. He appears tonight at The Sinclair in Cambridge, Massachusetts, and he has a few dates in California in June. But we’ll likely see him again when that new album hits our streams.

Here is Rostam’s setlist from May 2: