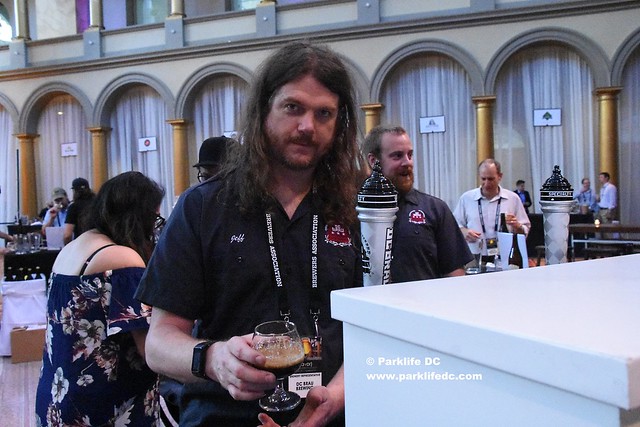 Jeff Hancock of DC Brau pours The Wise and the Lovely imperial stout at SAVOR 2017.

On the opening night of SAVOR: An American Craft Beer & Food Experience, anticipation ran high at the National Building Museum. Beer aficionados queued early in lines than ran down the block before opening. And SAVOR, I daresay, exceeded their expectations with a retooled experience that proved artful, decorative, and delicious.

I have attended four SAVOR beer events as of this year, and this 10th anniversary edition was my favorite by far. A big reason for that was the revamped arrangement of the banquet hall. Whereas an attendee may previously have navigated cube after cube of visiting breweries, not a bad thing surely, now people had more space to make themselves comfortable.

The Brewers Association truly thought about their space this year and added touches that made it feel like you might be in a modern beer hall with long wooden tables, candlelight, and easily navigable spaces from one end of the room to another. In addition, the association smartly places specialty food stations on the upper floor, giving the lower floor a smooth and sensible layout and making it easy for those of us interested in an extra nosh or two to find comfort upstairs. The SAVOR specialty food vendors included Nathan Miller Chocolate, Nathan Anda and Red Apron Butcher, American Cheese Society, Chop Tank oysters, and Monterey Fish Market. 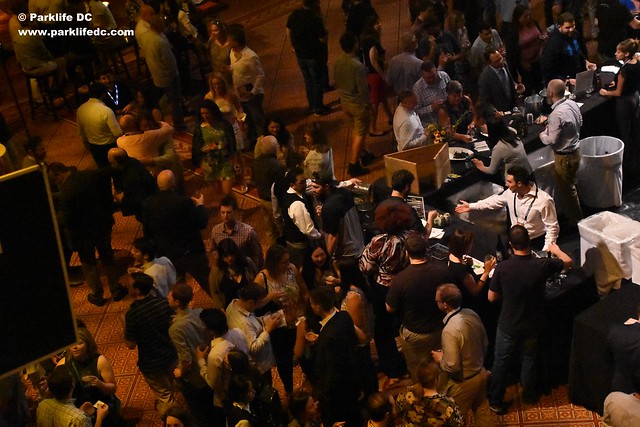 Good beers were plentiful, and this year they were paired with a widened selection of tapas-like food selections. Local hero Jeff Hancock of DC Brau, for example, was on hand to serve his The Wise and the Lovely imperial stout (10% ABV) paired with elk with pepitas, cacao, and mole. His ever-dependable Brau Pils German pilsener (4.6% ABV) was served alongside oil-poached halibut with fennel, green olive, and lemon.

While it’s always fantastic to enjoy established favorites at SAVOR, one of the compelling reasons to go is to check out the new offerings. SAVOR 2017 featured 86 independent craft breweries, 10 more than last year. Sixty-four percent of the breweries were not at SAVOR 2016, and 40 percent attended SAVOR for the first time. So completely new adventures in beer tasting were to be had at more than 30 breweries on hand. 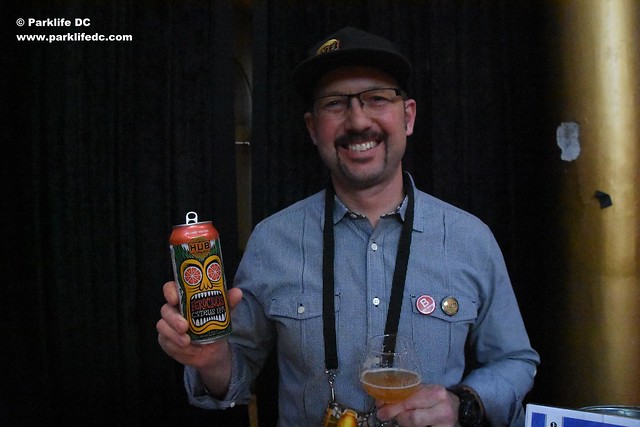 One of my personal best new discoveries were the beer from Hopworks Urban Brewery (HUB) in Portland, Oregon. Christian Ettinger, brewmaster and owner, was on hand to pour his Ferocious Citrus IPA (6.2% ABV), an American IPA, which was paired with a chicken curry salad with golden raisin, apple and walnut. HUB’s Patagonia Long Root Ale (5.5% ABV), an American pale ale, also proved a winner, paired with the poached halibut.

Christian told me about the partnership with Patagonia Provisions, the California company that supports sustainable farming. Together, they developed Long Root Ale with organic ingredients and Kernza perennial grain. The Kernza grain was the result of work between Patagonia and The Land Institute in Salina, Kansas, in regenerative agriculture. Kernza has long roots (hence “long root ale”) and grows well without pesticides, requiring less water than conventional wheat. The resulting Long Root Ale is a winner. 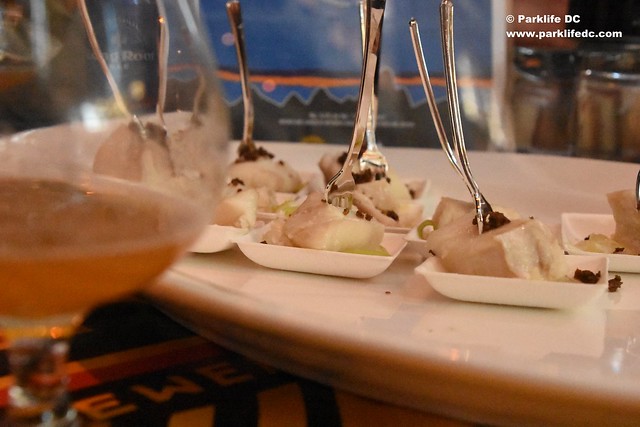 Given that there were beers from more than 30 states on hand, I perhaps was not geographically adventurous as I kept circling back to beers close to home — but there were some impressive beers from close to DC readily available. Old Bust Head Brewing Company, Vint Hill, Virginia, was in attendance at SAVOR for the first time, despite being so close to DC, having won the lottery system for a booth this year. Owen Bitas, director of outside sales, served up the breweries excellent Graffiti House West Coast Style IPA (7.5% ABV), paired with lamb tartare with tamarind and Thai basil, as well as the Coconut Gold Cup Russian Imperial Stout (10% ABV) paired with green coconut curry with papaya salad and Thai basil. That last pairing was utter brilliance as a coconut beer and coconut dish were bound to complement each other, but the pleasant roasted flavor of the Coconut Gold Cup really took the experience to another level.

I am myself an occasional visitor to Yards Brewing Company in Philadelphia, so it was a pleasure to see them at SAVOR. Given how solid are the beers at Yards, it’s a bit of a surprise that we don’t see more of them here in fair DC. They are without fail dependably quaffable. Rick Anstotz, Cicerone Certified Beer Server and sales manager, offered the ever-tasty Philadelphia Pale Ale (4.6% ABV), which is a beer readily available in most areas that carry Yards.

And Yards brought along their lovely Poor Richard’s Tavern Spruce Ale (5% ABV), which they based off a recipe by Ben Franklin for a beer with barley, molasses, and essence of spruce. The resulting spice beer was one of the most unique and easy-to-drink beers at SAVOR, so much so that I took a mid-event break to return and sample it again. 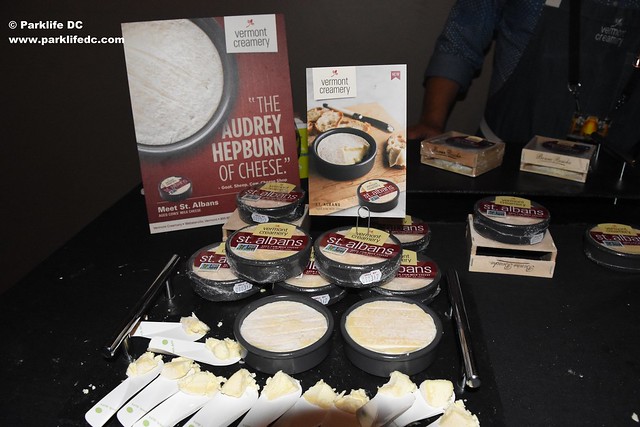 My evening ended with a bit of heaven on earth in the form of the cheeses from Vermont Creamery. On the second level, Anchor Steam Brewing Company, San Francisco, served its Anchor Steam California Common (4.9% ABV) and its Blackberry Daze IPA (6.5% ABV). That was all good and well, but they won the day with their pairings of Vermont Creamery St. Albans aged cows’ milk cheese and Bonne Bouche ash-ripened goat cheese. You could ask for no better experience, particularly at the end of the night.

SAVOR 2017 was the most compelling, intriguing, and delightful SAVOR to date, and I’m quite eager to see the Brewers Association return with the event in 2017. Salut, SAVOR! 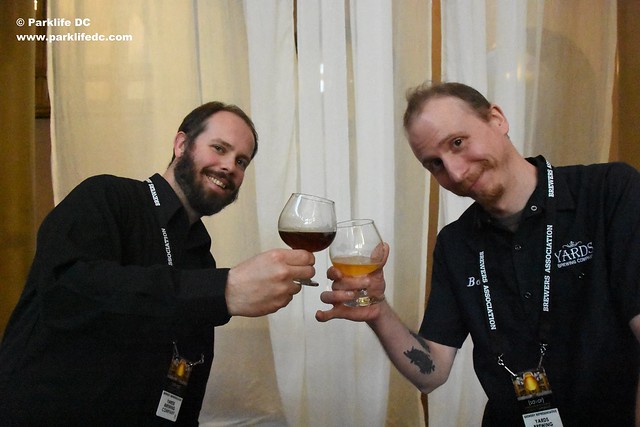 A toast with the gents from Yards Brewing Company.