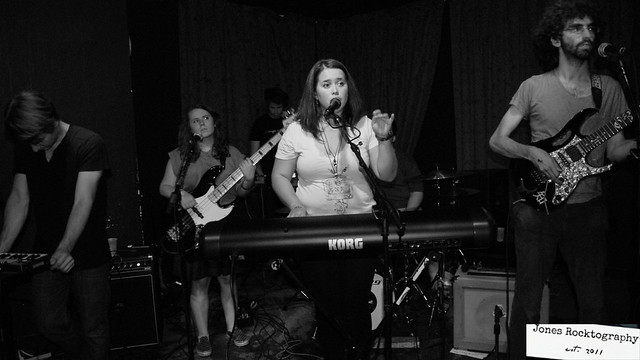 It’s 12:36 in the morning and I have to be up at 6:30 tomorrow for work. Normally, this review would wait! Thanks to Bent Knee, that isn’t going to happen, and I am not mad about that at all. The reality is, I have never been more excited to write a review for a band than I am tonight.

Boston “rock” group Bent Knee played at the Black Cat in DC on Thursday night in anticipation of their latest album, titled Land Animal. The 10-track album will be released on June 23 and is available for pre-order right now on the band’s website.

I put “rock” in quotes because that doesn’t even begin to describe the sound of this band. On Wikipedia, they are listed as “art rock,” which is a fair description. However, I would say that this music is simply art. No other words are needed to describe it because words can’t describe this band.

Bent Knee consists of six members : Ben Levin (guitar/vocals), Courtney Swain (vocals/keyboard), Jessica Kion (bass/vocals), Gavin Wallace-Ailsworth (drums), Chris Baum (violin/vocals), and Vince Welch (synth/sound/production). As I watched Bent Knee, it stood out to me how much they love playing their music. Sure, every band you see usually looks like they are having fun. With Bent Knee, you could almost feel it. You could see the smiles and the joy on their faces. Courtney spoke a few times throughout the night and you could sense genuine humility and warmth in her voice. Her thank you to the crowd was not forced or mechanical.

There is nothing traditional about Bent Knee, but that’s what makes them who they are. A few weeks ago, I had never heard of this band. The more I listened to them, the better I liked them. I fell in love with songs like “Holy Ghost,” “Land Animal,” and “Terror Bird.” I went past liking their music or having a song or two stuck in my head. I had an experience that I have never had.

A few songs into the concert, this group became one of my favorite bands. As I left the Black Cat, I looked on my phone to see if they would be playing nearby anytime soon. As a musician, I can almost always find something to appreciate in music. I can appreciate the hard work and passion people put into it, even if it isn’t my favorite music.

That being said, it’s harder to write great reviews for some bands than it is for others. With Bent Knee, it requires no effort. Believe me when I tell you that this is not an exaggeration. In one night, Bent Knee went from being a band I enjoyed and was intrigued by to a band that I will now keep track of and see them whenever they come back to the area.

Thank you, Bent Knee. Thank you for an awesome show, thank you for who you are, and thank you for the music you make. Check out their music below and go get their new album!