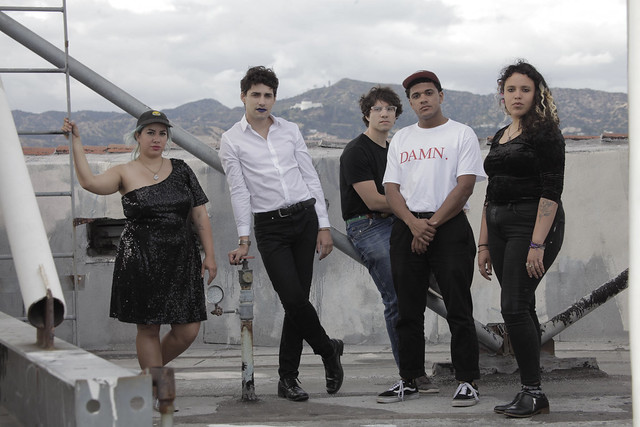 Punk quintet Downtown Boys are making quite a splash with their upcoming third album, Cost of Living, out on Aug. 11 via Sub Pop Records. The band are launching a major US tour that includes a show at DC9 on Monday, Sept. 4.

The group from Providence, Rhode Island, has struck a socially conscious tone, giving a voice of protest to Chicana and Latino voices as well as championing gay pride and queer culture. But at the same time, Downtown Boys focus on energetic fun.

Pitchfork hailed lead single “A Wall,” as a best new track, saying, “Accompanied by production from Greg Norman and Fugazi’s Guy Picciotto, Downtown Boys sound sharper than ever, their urgency tightened into a raging storm. The band understands that for a song to be political, it needs to be more than just than a temporary rebellion: It has to dig into the essence of an identity with relentless honesty.”

Watch Downtown Boys perform “A Wall” live on PressureDrop.tv in a clip from April:

NPR also praised the single: “The horn arrangements bustle like a punked-out soul section, as does the call-and-response with singer Victoria Ruiz. Joey La Neve DeFrancesco’s ringing guitar melodies give more space to the driving rhythm section that want to burst through the very walls that Assata Shakur’s poem ‘i believe in living,’ which inspires ‘A Wall,’ asserts can so easily be broken down.”