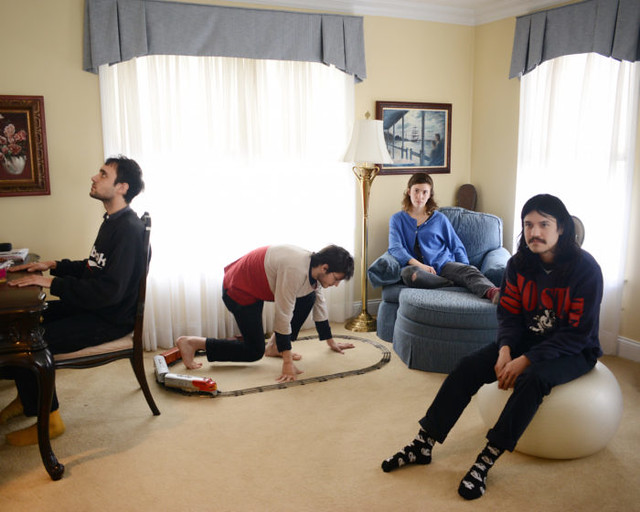 Philadelphia’s Palm is making some absorbing experimental music, as evidenced by their most recent EP, Shadow Expert, published via Carpark Records on June 16. The art rock quartet perform at DC9 on Wednesday, July 26.

Guitarists Eve Alpert and Kasra Kurt formed Palm at Bard College in 2012 after recruiting drummer Hugo Stanley. Bassist Gerasimos “Gerry” Livitsanos came onboard to complete the band, which relocated to Philadelphia in 2015. That same year, they released their first EP Trading Basics.

Watch the official music video for “Shadow Expert,” the title track of the new EP by Palm, on YouTube:

Said Matt Grosinger in praising the band’s new EP for Pitchfork: “Inscrutable though they may be, Palm are not completely sui generis: They descend from a long line of experimental weirdos.

“Throughout Shadow Expert you can hear echoes of Slint’s Spiderland, the brash clangor of pre-SST Sonic Youth, the tricky time signatures of math rock demigods Battles, and the wonky iridescence of Deerhoof and tUnE-yArDs (the latter two have shared producer Eli Crews with Palm). But whether or not they have the chaotic compositions of these forbears in mind, Palm seem most interested in willfully straddling the line of communication breakdowns,” Matt added.

Sounds like something we should see! Buy your tickets online.