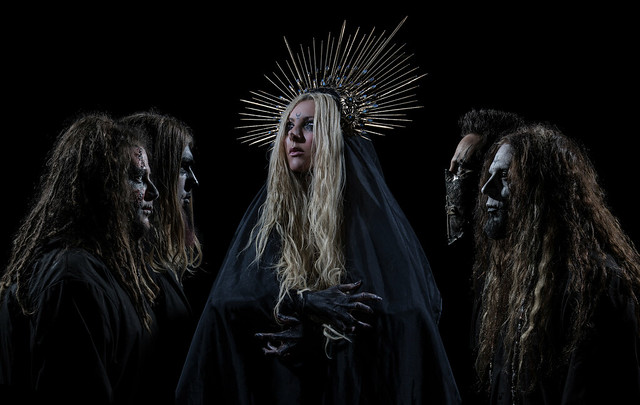 In This Moment (Photo by Jeremy Saffer)

Heavy metal rockers In This Moment released Ritual, their sixth studio album, in July via Atlantic Records and Roadrunner Records. The Los Angeles quintet launched the Half God – Half Devil Tour to support the album with a stop at The Fillmore Silver Spring on Sunday, Oct. 8.

On the new record, Maria Brink (vocals, piano), Chris Howorth (lead guitar), Travis Johnson (bass), Randy Weitzel (rhythm guitar), and Kent Diimel (drums) explore a mix of heavy metal and blues. To get a really great idea of their sound, check out their cover of Phil Collins’ “In the Air Tonight,” which appears on the album.

Watch the official lyric video for “In the Air Tonight” by In This Moment covering Phil Collins on YouTube:

In This Moment’s last few albums have compelled them to new heights in US chart success. Ritual hit #3 on the US Top Hard Rock Albums by Billboard and #6 on US Top Rock Albums overall. Frontwoman Maria said the band wanted to do something different after the success of their last album, Black Widow.

“It’s like we’re going into the next realm,” Maria said. “I had a conviction of feeling empowered in my life and with myself. I always write from a personal place, and I needed to share that sense of strength. I’ve never been afraid to hold back. Sometimes, I can be very suggestive. However, I wanted to show our fans that this is the most powerful side of myself and it’s without overt sexuality. It’s that deeper serious fire inside of my heart.”

“What Maria is saying comes from deep inside,” guitarist Chris agreed. “This time, we had a bunch of ideas started before we hit the studio. There was a really clear direction. It’s different.”