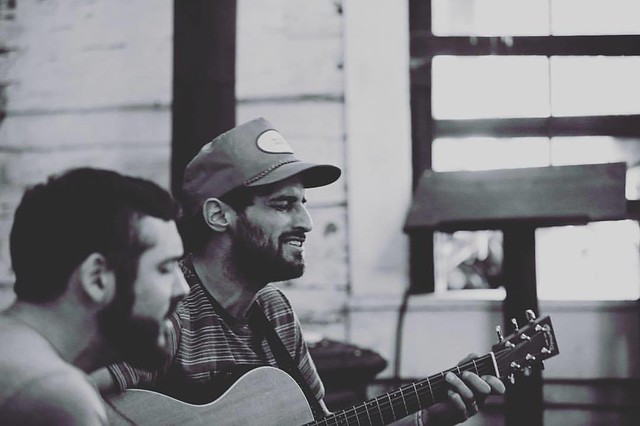 Doc Robinson perform live at Nelsonville Music Festival in their hometown of Columbus on June 2. (Photo courtesy the band)

Normally a bigger band, Doc Robinson arrived as a duo from Columbus, Ohio, at DC9 and played a stripped down accoustic show. They played a fantastic set on Tuesday.

The duo consists of Jon Elliott and Nick D’Andrea. As Jon stated at one point, they normally play with a whole band, but Tuesday it was just the two of them.

Jon and Nick recently released their first full-length album, titled Deep End, in June. The duo mostly played from this album, but also mixed in a few other songs including a fun cover of a song called “Mellow Yellow.” Among their best songs was the lead track “Slip Away” from Deep End. Doc Robinson also played a catchy new song called “Chattanooga,” which proved to be a favorite.

At first I was curious as to how some of the songs would translate minus some of the other instruments and sounds from the studio recordings. The songs sounded great! It’s a true testament to the talent of these two musicians. Both sang while Jon added some harmonica and Nick played guitar. They both seemed to really enjoy themselves — Nick was beaming earnestly throughout the show.

Unfortunately, a section of the crowd seemed too interested in their own conversations to quiet down during the performance. Doc Robinson were opening for Caamp, and it seemed the audience wasn’t prepared to focus on the opening act. From my time seeing bands in the DMV area, I have found that the audiences are almost always very respectful and pay attention, even if they may not know the band that is playing. The DC9 crowd did not show Doc Robinson this respect on Tuesday night. It’s a shame because they missed out on a really good performance.

All that being said, I would highly recommend Doc Robinson. Their music is soulful, smooth, fun, and catchy. Jon truly has one of the best voices I have ever heard.

Check out some of their music below and you will see what I mean. Keep an eye on these guys! They have a bright future, and I hope to see them back in the DMV soon.