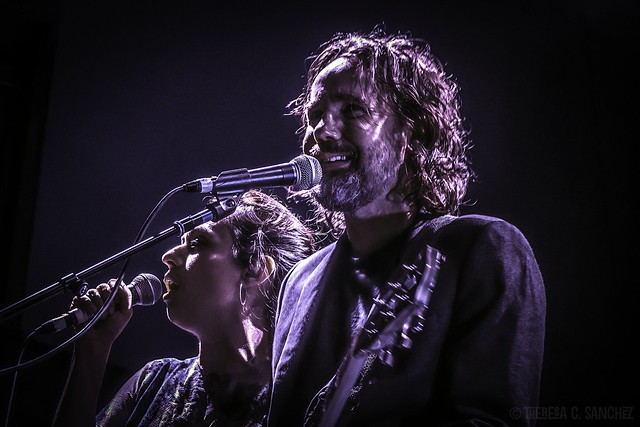 Fear. Anxiety. Depression. These psychological stressors are at an all-time high, according to the U.S. Centers for Disease Control and Prevention, affecting an estimated 8.3 million American adults. Sure, meditation and exercise might be tried and true methods to calm an overloaded brain, but the Canadian baroque pop collective Broken Social Scene have an alternative prescription to offer. No, it’s not “more cowbell” — although it wouldn’t be all that surprising given how many musical instruments they utilize on stage. Kevin Drew and crew employ a more engaging and face-to-face method.

“They told us this night sold out so we decided we’re going to play our fucking guts out to the ends of the earth for you tonight,” said the loquacious co-founder and self-described “semi-leader” of the group at 9:30 Club on Sept. 19. “[…] This means so much to us. We’re here for you. We’re not here for ourselves. So you got to do it. You got to be here. You got to let it all go. Let’s make this therapy. Let’s put that in the package for what the ticket costs. We love you and we love your country!”

Once audience’s cheers subsided and the orchestral-like tuning of the band’s instruments ceased, the group commenced with the night’s first song — “KC Accidental,” the second track off their sophomore album, You Forgot It in People. That 2002 record was so popular the band had to reissue an additional pressing in 2003. The robust combination of guitars, drums, and horns helped create a multi-layered, Phil Spector-like “Wall of Sound” and set the tone for the rest of their 90-minute set. The energy in the packed room at the 9:30 Club one month ago today was not just palpable, but unrelenting until the final note was played. (Broken Social Scene, or BSS, also played a second, very full show at 9:30 Club the following night, Sept. 20.)

Washington, D.C., was the third stop on the second leg of the group’s first North American tour in six years, but you’d never know it from listening to them play together. That’s probably because some members of the expansive group have known each other for decades. Kevin likened their dynamic to a more “complicated” and “cooler” version of Fleetwood Mac and mentioned that singer Ariel Engle and guitarist Andrew Whitman were married. While expounding upon the band’s mission of love — not to be confused with “avoidance, arrogance or ignorance” mind you — he noted he met indie rock musician and singer Amy Millan (also of Stars, among other projects) when he was 13 while attending summer camp. “I’m 41 now. I didn’t think I’d be in a handclap band at 41, but I am,” he said. “I’m in a handclap band with my friends.”

Brendan Canning (singer, multi-instrumentalist, and additional co-founder) disagreed. “Who doesn’t want to be in a handclap band? I don’t NOT want to be in a handclap band.” Despite being injured, the Ajax, Ontario native played quite enthusiastically. He admitted to being at “70 percent” and asked the audience to “take it easy on [him]. Amy was quick to chime in with: “Everybody knows that Brendan Canning’s 70 percent is everybody else’s 150, so . . .” An impromptu “coffee guest list song” brought him up to 85 percent and served as one of the show’s many highlights.

If you plan on seeing BSS live — which is highly recommended — be sure to throw out a random phrase like “slumber party.” It might illicit some nonsensical lyrical banter like the following:

Kevin: [singsong vocalization] “Tonight. And tomorrow if you want to come back with me, you just got to pay my mom a little bit. She’s cool. She’s gonna make you some food.”

Kevin: “If you see Brendan in the moment, he’ll put you on the guest list, because that’s what he does. He’s that kind of guy.”

Brendan: [mimicking the high-range vocalizing of Barry Gibb] “If I see you at the coffee shop, I’ll get you all the stuff.”

Brendan: “Just pour a coffee. I’ll put you on the guest list.”

By the fourth song, 10 of the group’s 12 members had made it onto the stage. Emily Haines (also of Metric) and Leslie Feist (also of Feist touring for her fifth album Pleasure) were noticeably absent. A large white backdrop sparingly adorned with trees and flowers worked well with the various light changes throughout the show. It resembled the painterly technique of the cover artwork on the band’s newest album Hug of Thunder — their first in seven years. Fans not only welcomed the new tracks being performed, but many were already already familiar with the lyrics and sang along word for word.

Kevin peppered the show with nuggets of opinion and background facts throughout the show, keeping the audience both informed and entertained. Below are some specifics:

The 18-song setlist can be found here. It relied heavily on tracks from their newest album and their third studio offering, 2005’s eponymously named record. Measuring by applause, it appeared that “Protest Song,” “Hug of Thunder,” “Skyline,” and “Major Label Debut” were the overwhelming fan favorites.

Nothing about this melodic outfit is “broken” and after witnessing their well-executed, lengthy performance, intertwined with honest in-between-song oration, it’s clear that Kevin and his bandmates want people to be more social offline. Step away from the screen and be apart of the scene. Trade your fidget spinner in for a 45 rpm adapter and use that to play your vinyl. Turn it up to 11 — especially on a Tuesday night. Hold on to those who reach out for an embrace. Hug the thunder. You’ll feel better, guaranteed.

Here are some pictures of Broken Social Scene performing at 9:30 Club on Sept. 19, 2017. All photos copyright and courtesy of Theresa C. Sanchez. 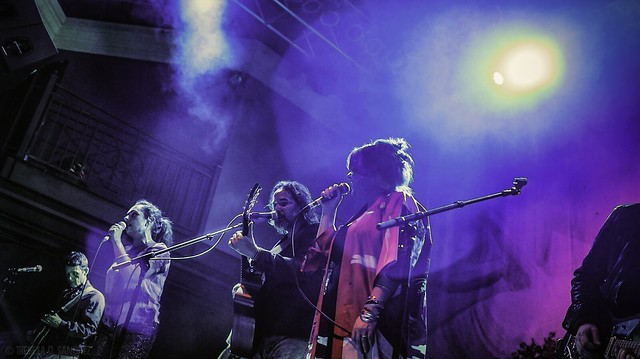 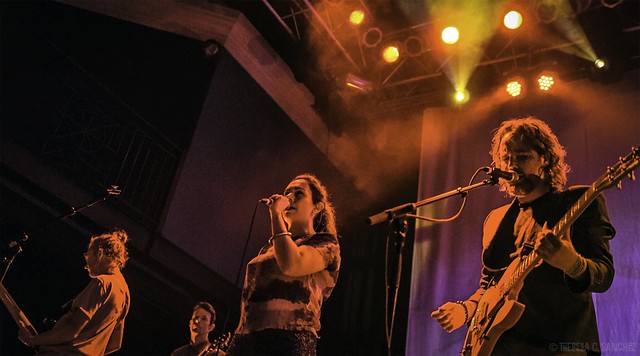 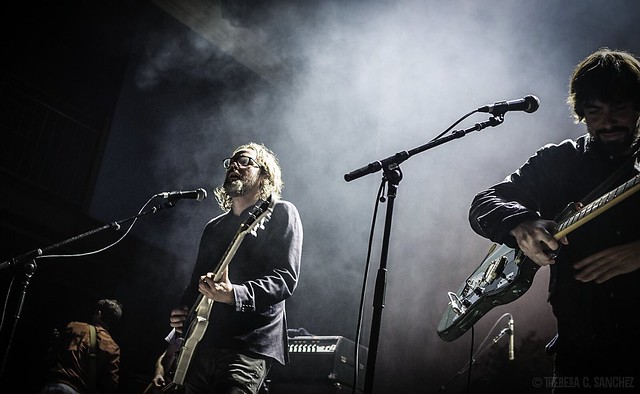 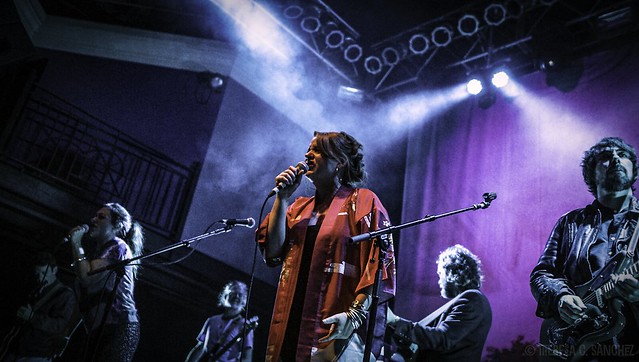 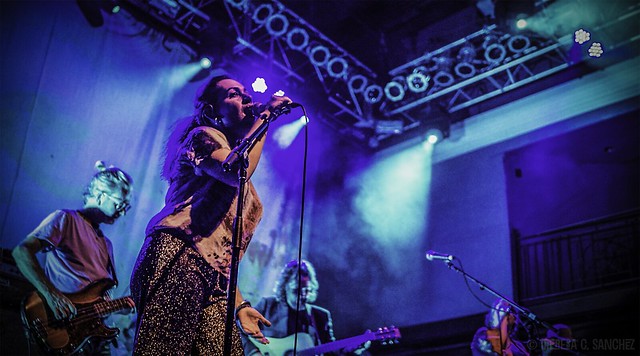 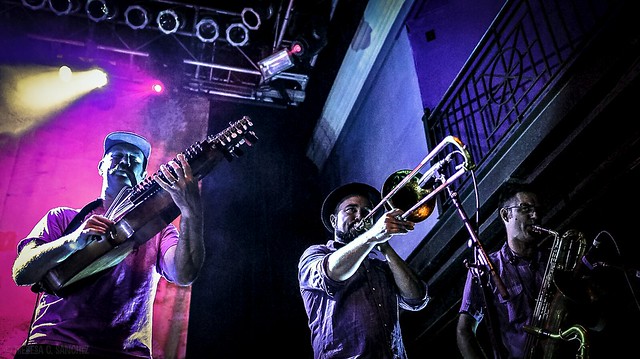 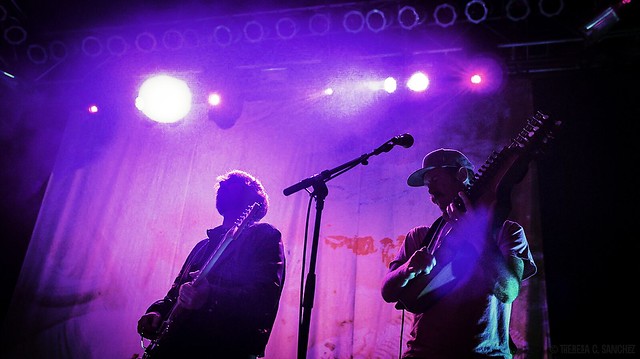 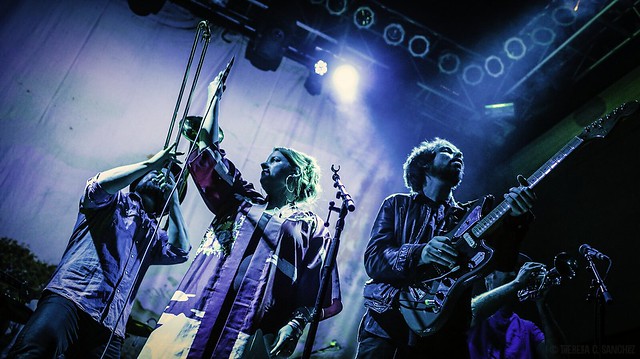