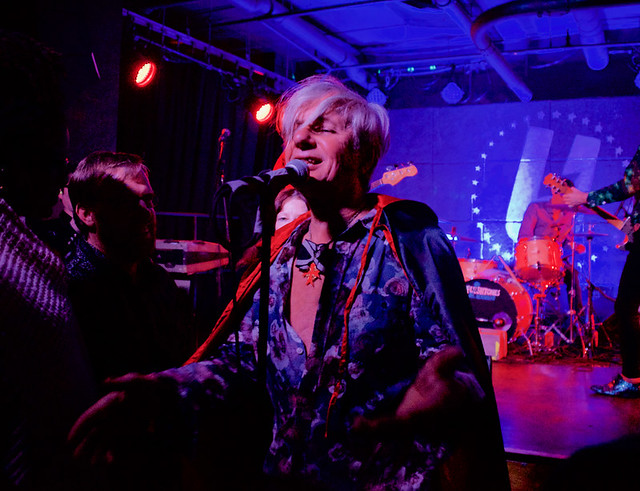 Peter Zaremba sings with The Fleshtones at U Street Music Hall on Oct. 20, 2017. (Photo by Ben Eisendrath /Instagram+Twitter: Insomnigraphic/GrillworksBen)

Lower Manhattan long will be regarded as one of the epicenters of great American rock music, in particular for the bands that came out of New York in the mid-to-late ’70s. The likes of Blondie, the Talking Heads, and the Ramones burst from CBGBs and Max’s Kansas City, putting Manhattan on the musical map.

While many of Blondie’s contemporaries have faded, it came as some small surprise to me that one of the better groups of the era never took a break and still tour strong today. The Fleshtones performed at U Street Music Hall to correct my oversight on Oct. 20, and I was easily won over by their ear for really great tunes and their eye for smart stagecraft.

If you like I have not yet seen The Fleshtones, let me assure you that the quartet are the real deal. Keith Streng (guitar, vocals), Peter Zaremba (vocals, harmonica), Bill Milhizer (drums, vocals), and Ken Fox (bass, vocals) look and sound exactly still like they broke through The Bowery 40 years ago to bring ’60s-tinged garage rock to the masses. In many ways, The Fleshtones will remind you of the Ramones, albeit a more self-aware and purposefully camp counterpart to the Ramones.

The Fleshtones even have a recent song that recognizes their roots — “Remember the Ramones” from their 2014 album Wheel of Talent, published by Yep Roc Records. “I was in the club and I saw you there/ Packed like sardines but we didn’t care/ You were standing on your chair/ Remember The Ramones!/ Hey!” sings movie-star handsome Peter Zaremba — who appears to be just as nimble as 40 years ago given his stage- and bar-jumping capabilities.

Since releasing their debut album in 1982, The Fleshtones have not slowed down, and their recent period with Yep Roc has proved productive indeed. The band released The Band Drinks for Free, their latest and 21st album, only last year. They honored that record with several songs from the album, including the wonderful “Suburban Roulette,” which is full of catchy guitar riffs and a classic narrative structure that makes it fun and easy to sing.

Soon after, The Fleshtones play “Gotta Get Away,” a cover of The Rolling Stones and another recent release. The cover suits The Fleshtones aesthetic well, and Peter’s strutting and howling is the equal of Mick Jagger’s for my money.

Peter’s not the only vocalist, however — a flexibility that gives The Fleshtones unexpected strength and diversity in sound. Fleshtones co-founder Keith Streng, for example, took lead vocals for “Love My Lover” from The Band Drinks for Free, and his vocal pitch gave the song rather a rockabilly flavor (while remaining firmly grounded in Keith’s own dynamic garage guitar). At U Street Music Hall on Friday, the energetic Mr. Zaremba could be found shaking maracas or playing harmonica when he wasn’t singing. (And when he was singing, he was wont to leap onto the bar at U Street Music Hall and pull other antics appropriate for a singer clad in a theatric cape.)

Overall, The Fleshtones are talented and fun! I don’t have a single complaint about the show, but if I did it would be that they didn’t appear to play anything older than 2006. The Fleshtones opened with “Bigger and Better” from their 2006 album Beachhead, and then played a few songs, like the marvelous “Feels Good to Feel,” from their 2008 album Take a Good Look!

As a newcomer to the band, I would have welcomed some of their ‘80s material. Even the call to action to twirl in place seemed to spring from the 2014 album Wheel of Talent. Every admirer of The Fleshtones dutifully spun when the band called for them to “spin the wheel,” and it happened in such a manner that I presumed they were doing it for decades!

Well, if I want more songs from The Fleshtones, I had better see them again the next time they perform. The Fleshtones appear next in Troy, New York, for The Hangar on the Hudson on Nov. 4. They have a few dates in France in November and December — and then who knows? One thing’s for sure — more of The Fleshtones is yet to come. And we are all the richer for it.

Here are some pictures of The Fleshtones performing at U Street Music Hall on Friday, Oct. 20, 2017. Our entourage happened upon The Fleshtones on Friday to celebrate the birthday of Ms. Miyun Park, who was thrilled to welcome Peter to her birthday shenanigans. Thank you, Peter, and happy birthday, Miyun! All photos copyright and courtesy of Ben Eisendrath. (Follow Ben on Instagram+Twitter: Insomnigraphic/GrillworksBen.) 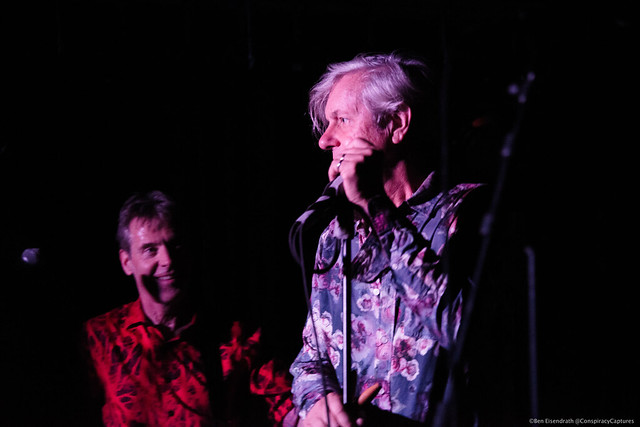 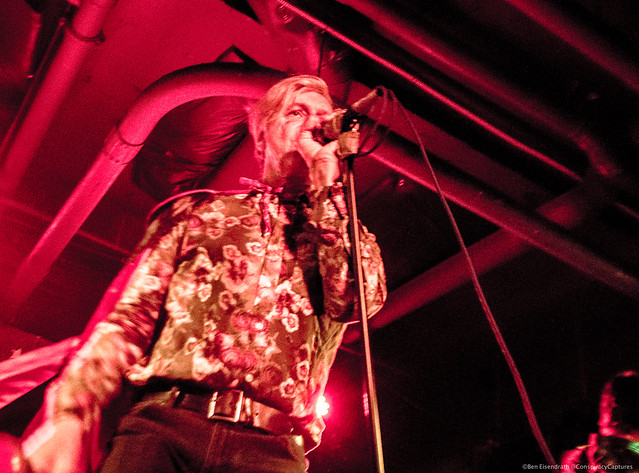 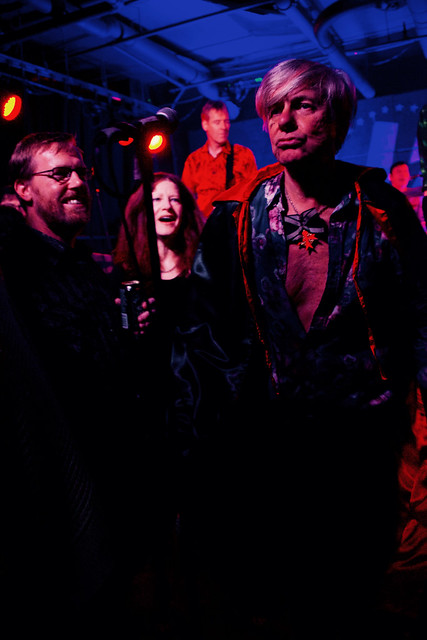 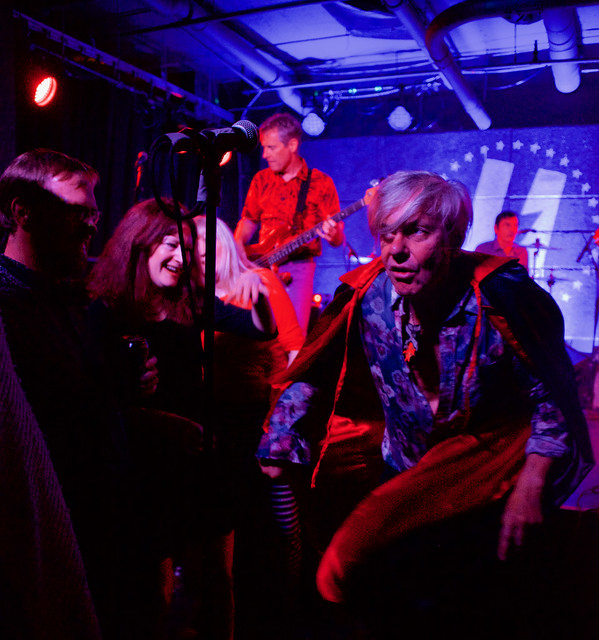 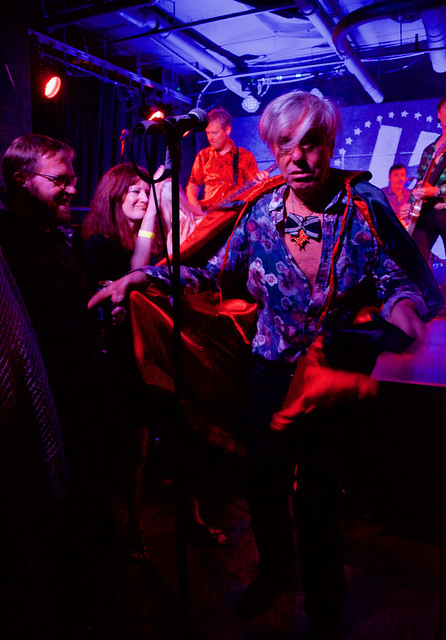 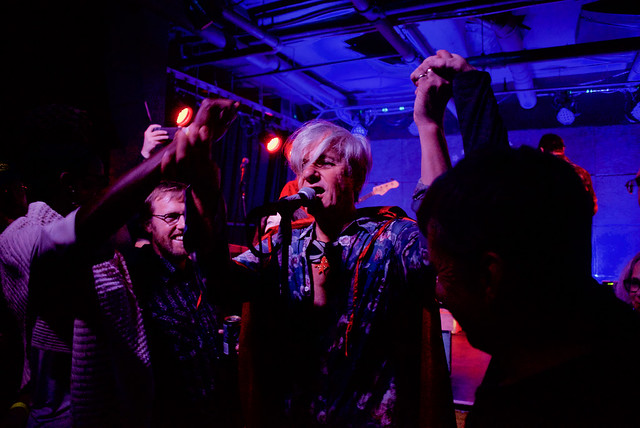 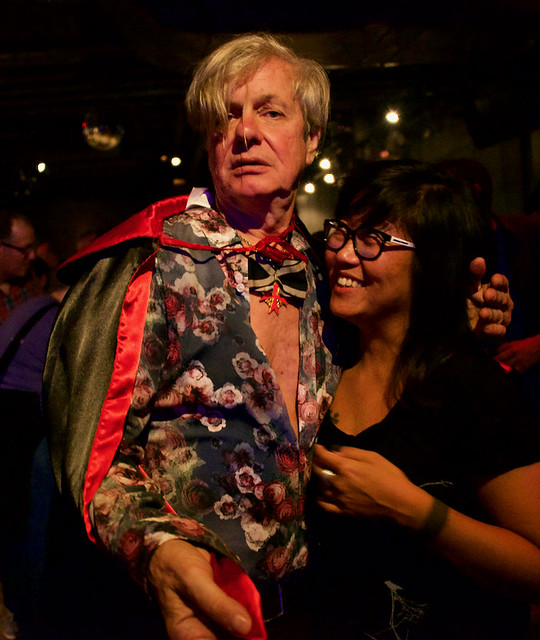