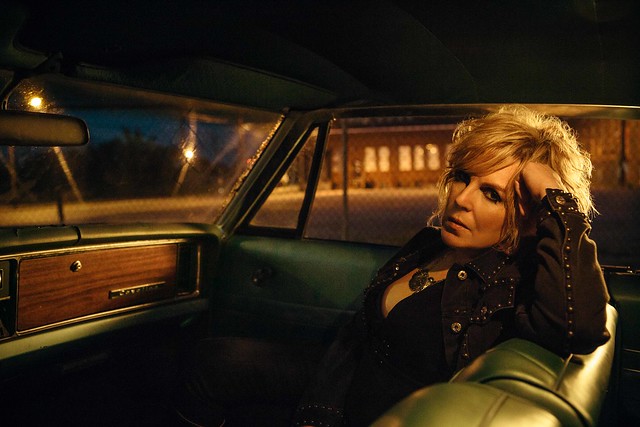 I suspect the inclusion of Lucinda Williams among my favorite artists stood out a little on my (now deleted) dating profile, buried as it was among a list that heavily favored new wave, electronic, and industrial artists.

The contrast in genres was apparently notable enough that visitors commented on it more than once. But then my appreciation for Lucinda’s music did in fact arise out of a specific set of circumstances, absent which I might not have discovered her at all.

My fandom might be by proxy, as it was arrived at through witnessing the experiences of a long lost friend. She was suffering from some major setbacks in life, and I had offered to help her keep a series of medical appointments associated with her rehabilitation. She would often put on a copy of Lucinda Williams’ “Car Wheels on a Gravel Road,” as I drove her to her clinic, and her eyes would drift off into the distance as the music played.

I came to appreciate how the record, with its sorrowful tunes of lonesome travels through the backroads of Louisiana, mirrored her own experiences. A forlorn heart had put her on a journey down those roads years before, seeking to prove her devotion to a love that she ultimately lost to the barrel of a gun. If ever there was an artist whose music could express the sadness that such tragedy would invoke, it’s Lucinda Williams.

Her songs still recall for me the sorrow my friend suffered through. As an admirer of Lucinda’s music, I attended her show at the Lincoln Theatre on Monday, and I was fortunate enough to do so (in the company of someone who read the aforementioned profile — a fellow fan, how perfect!)

Lucinda’s current concert tour serves to mark the 25th anniversary of her 1992 album “Sweet Old World,” and coincides with the release of a re-recorded version of that album. All the songs from the renewed “This Sweet Old World” were played in sequence at the Lincoln Theatre on Monday night, followed by a cross section of Lucinda’s other work. In between the songs, Lucinda spent some time telling the audience about the inspiration for the songs.

Although Lucinda is a powerful and inspiring live performer, her songwriting is most prominent among her many talents. As such, Lucinda clearly wanted the audience to understand the context for the songs she was playing. Even allowing for the inordinate number of songs whose inspiration sprung from the suicide deaths of friends and colleagues (!), the stories behind the songs were a source of humor throughout the set. On one occasion, she was so intent on sharing a story that she stopped a song in mid-performance to clarify the details of its inspiration.

Listen to This Sweet Old World by Lucinda Williams on Spotify:

Lucinda and her company’s approach to this performance was suitably understated, and it was beautifully framed by the aesthetics of the Lincoln Theatre, both visually and acoustically.

The slowly modulated stage lighting was appropriately reserved, at some points seeming to inhale blue tones and breathe out ambers in time with the music. Lucinda was in good form vocally, and the mix supported the many changes in the dynamics her songs require. There were just three others on stage — guitarist Stuart Mathis, bass player David Sutton, and drummer Butch Norton, collectively known as Buick 6 — and their contribution was effective at underscoring the songs without overpowering them.

Stuart’s solos were intricate and fluid, never over indulgent, but never wasting a note. David played both electric and standup bass, the latter sometimes bowed, producing long winsome tones that anchored the chord changes. I was especially keen on Butch’s drumming. His flourishes were always tasteful, adding such accents as triangles, shakers, and rattles that shook like bones. The brushed snare on “Memphis Pearl” brought out a deep resonant character that was almost cinematic.

Lucinda remarked in between songs that she never wanted to have to choose a particular style in approaching her music. The diversity of influences presented in her set speak to her success in avoiding the trappings of a particular genre.

This was true for the songs from “Sweet Old World,” owing as much to country as to blues, Dylan-inspired rock, folk, and R&B, but especially true for the songs that followed. She performed “Ghosts of Highway 20” solo, then she was joined by her guitarist for “Lake Charles.” As the set then moved forward with a tribute to the late Tom Petty (“Southern Accents”), the remaining band members returning to the stage to complement the build in energy.

By the crescendo of “Foolishness,” and the encores of “We’ve Come Too Far to Turn Around” and “Joy,” the crowd was on their feet in full support. The distressing times we find ourselves in beg for an anthem like “We’ve Come Too Far,” and it was clear that it resonated with the audience.

I couldn’t help but suspect that the songs in the finale were unofficially dedicated to the crowd down Pennsylvania Avenue (the key sentiment being, “You took my joy, I want it back.”) It is to her credit that Lucinda is so adept at expressing the anguish of the personal as well as the aspirations of the many in her music.

It’s definitely worth your time to catch Lucinda and her band on this tour! I don’t care where your taste in music may fall; everyone can use a good dose of Lucinda Williams in their lives.