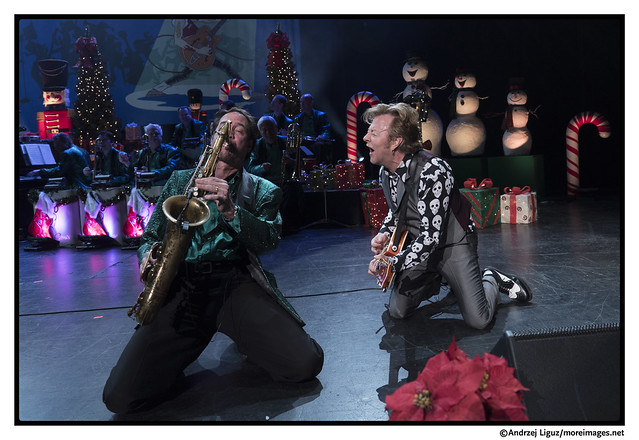 Brian Setzer Orchestra performs on their Christmas Rocks! Tour at the Microsoft Theater in Los Angeles. (Photo by Andrzej Liguz)

I vividly remember the friend who put me on to the music of the Stray Cats 30+ years ago, as he was living the zeitgeist of the ’80s rockabilly revival. I was in Rochester, New York, attending RIT, and he’d come up from Jersey to attend school there as well. He had the greaser haircut, the leather jacket, rolled up cuffs on his jeans, cigarettes under his T-shirt sleeve, and designs on marrying his still virginal high school sweetheart once he got his degree.

The Stray Cats were in constant rotation in his dorm room, and he said to me once, “Y’know, even if this whole rockabilly scene fades away tomorrow, this guy Setzer’s still got a job for life.” He was referring to Stray Cats frontman Brian Setzer’s formidable talent as a guitarist. It was clearly evident back then, even if Setzer’s stylistic trappings were a little different from rock hero contemporaries like Eddie Van Halen or Yngwie Malmsteen.

Brian Setzer and his big band orchestra took to the stage at the Warner Theatre this past Saturday night for the DC stop on the Christmas Rocks 2017 Tour, and they immediately set about justifying my college buddy’s predictions about rock star job security. Brian Setzer has long been my favorite guitarist, and not just because of his raw skill, but frankly because I like the context in which he chooses to showcase his talent — rock that also rolls, and rhythms that swing.

Brian rode to success on the retro rockabilly branch of the ‘80s New Wave, and his band the Stray Cats quickly became the standard bearers for the scene. And while it’s true that the revivalist ‘50s-inspired jukebox sound only made minor inroads onto the pop charts at the time, it never really went away afterward.

The Stray Cats benefitted from great timing just as much as great talent, and the band managed to go through breakups and reformations for the remainder of the ‘80s. But just as the garage band basics of punk acts like the Ramones set the stage for the rockabilly rebels of the New Wave era, a similar revisionist arc in the ‘90s brought it back again in the form of artists like Reverend Horton Heat. Couple this with the swing dancing craze of the late ‘90s, and before you could ask, “Whatever happened to…?” Brian Setzer was back on the Billboard charts with his cover of “Jump, Jive, and Wail.” Incredible timing, plus incredible talent allowed him to take his rightful place among the Squirrel Nut Zippers and Voodoo Daddies of the period as the elder statesman of retro boogie. 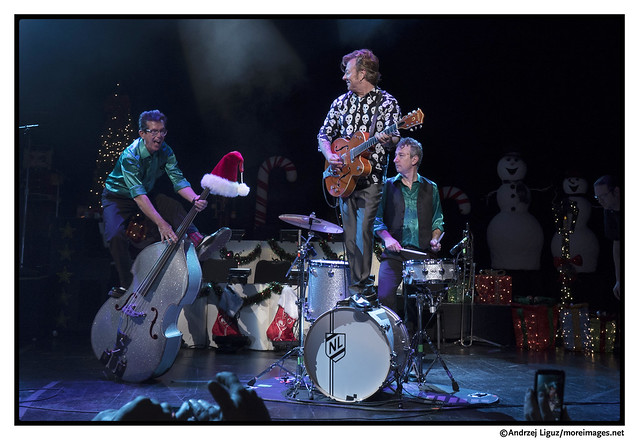 Thus, the Brian Setzer Orchestra (BSO) was born, and along with it a very timely annual holiday tour that takes us where the Christmas Revels fear to tread (sorry, mom!). Included in the set of the 14th Annual Christmas Rocks! Tour on Saturday night were the band’s rollicking interpretations of Yuletide classics like “Here Comes Santa Claus,” “Rockin’ Around the Christmas Tree,” and “Jingle Bells.” A staple of this annual ritual is BSO’s version of “The Nutcracker Suite,” done up swing style, with a little bit of onstage shtick thrown in. The musicianship on display was truly amazing, making its inclusion more than simply an inside joke.

The program in general allowed for a bumper crop of solos by the various members of the Orchestra, from Brian himself to the standup bass player to the pianist to several members in turn of the 12-piece brass and woodwind section. I held out to the finale for the drum solo, but it was worth it. I would have loved it if the girls singing backup, decked out in their tight red dresses and victory roll curls, had gotten the chance to show off a bit more. But they did get to strut their stuff on the choruses of “Angels We Have Heard on High.”

The set included several timely tributes, including a performance of Glen Campbell’s “Wichita Lineman” and Tom Petty’s “Running Down a Dream.” BSO then left the stage so that Brian could offer a very warm and cozy solo performance of “The Christmas Song (Chestnuts Roasting on an Open Fire).” Next, in a throwback to the early days, he was joined on stage by just the drums, bass, and piano for a raucous rendition of “Rockabilly Boogie,” dedicated to the legendary Danny Gatton.

Brian continued through the next couple of numbers with this stripped-down lineup, and it was a thrilling reminder of the first Stray Cats show that I got to see in Rochester back in ’83. The icing on the cake was the inclusion of “Fishnet Stockings,” a personal fave from their first album. This was followed by the full orchestra returning to the stage for “Rock This Town.” For the sake of any other longtime fans keeping score, classics from way back included “Stray Cat Strut,” “Gene and Eddie,” as well as Setzer’s solo originals “Dirty Boogie” and “Hoodoo Voodoo Doll.” 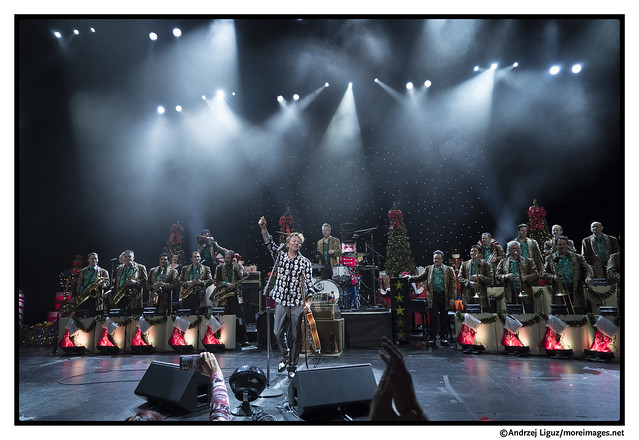 The restored Warner Theatre is an absolutely gorgeous place to see a show, especially one like this. In addition, the stage was nicely decked out with seasonal regalia, including a Christmas tree, a neon color shifting bandstand, and shiny presents all around. The band’s attire suited the theme as well, although it was a close call as to whether the mistletoe and holly would win out over the abundance of leopard print patterns.

The most difficult part of this show had to be remaining seated through such a lively revue! The first Stray Cats show I attended was at a very similar old theatre in Rochester, and those of us on the balcony could feel it pitching up and down from the sheer energy. Years later I caught grief for my inability to keep still during one of the band’s performances at the old 9:30 Club (my defense can be found in the lyrics of Eddie Cochran’s “C’mon Everybody.”)

The crowd at the Warner pretty much boogied in place for most of the show, but eventually seated toe tapping gave way to dancing for a small segment of the audience. When one couple did start to twist together out in the aisle, they were directed back to their seats by one of the ushers. Yup, I hate to say it, but the place is still a little stuffy. I go back a long way with the Warner, to shows during the New Wave era prior to the restoration, and the first thought to cross my mind was of the New Order show I attended back then where the young audience pretty much rushed the stage. I ain’t gonna begrudge the Warner their cautious approach. They’ve got a lovely and graceful old lady to care for after all. But… how can I put this… I knew the bride when she used to rock n’ roll.

Well, I’m happy to say that Brian Setzer’s still rockin’ like not a day has passed. BSO’s US tour dates continue across the country through Dec. 28 (including a Christmas Eve show in San Francisco — amazing!). There’s no better way to celebrate the holiday. 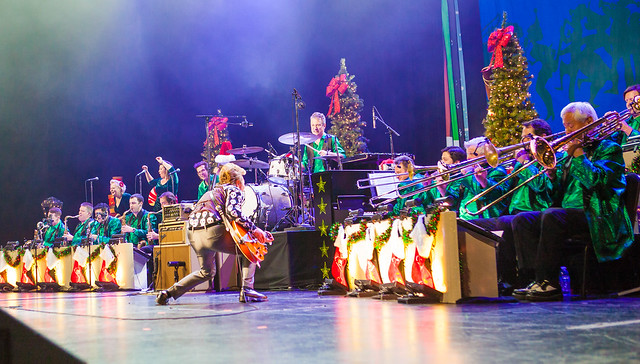