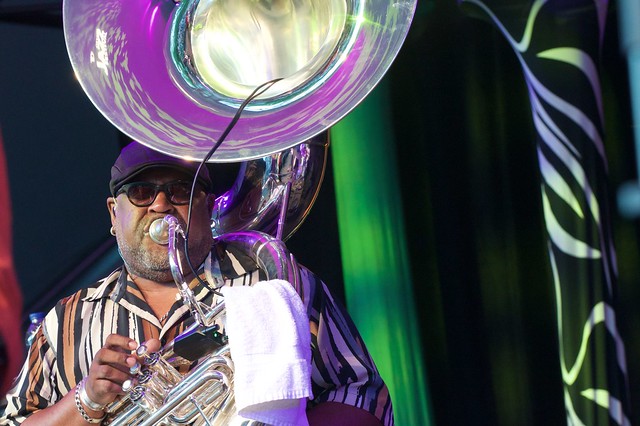 The last week of 2017 will be remembered as a cold one. I’m not very fond of winter and I spend most of it grousing. So I found myself, somewhat sullen in mood, entering the State Theatre on the last Saturday before the New Year to encounter — warmth!

I’m not just talking about the toasty temperature of the State Theatre itself; I’m referring to the mood being set by the band on the stage. Dirty Dozen Brass Band (DDBB) had come to Falls Church this evening as part of their 40th Anniversary tour, and they were throwing down a piping hot musical stew of New Orleans Jazz over a bed of sizzling funk that turned this otherwise icy patch of Northern Virginia into summertime on the Bayou.

Before this concert, I knew the band by name only — a name that does correctly identify the majority of their instrumentation, but otherwise I had no preconceptions. (Okay, I was kind of expecting to see 12 people on stage instead of seven, but whatev. I figure if I can eat at a Five Guys restaurant that is staffed by four dudes and a chick, I can deal with this.)

I nevertheless picked up on the Big Easy vibe very quickly. The first few notes of “When the Saints Go Marching In” clued me in as to where they were from. But along with the Louisiana pedigree, there were a lot of other currents flowing into the band’s sonic delta.

DDBB mixes together lots of funk, blues, dance, calypso, and even some modern club music influence (that’s right, they offer a cover of a Rihanna song in with their considerable repertoire.) The funk influence caught my attention straight away, as I was noticing Parliament-Funkadelic-inspired riffs in “Unclean Water.” This was further underscored by the band’s rendition of Stevie Wonder’s “Superstition,” as well as the James Brown medley later in the set.

I confess, I caught myself searching the stage for the electric bass player responsible for the bubbling low tones augmenting the rhythms, but there was none. It was all down to DDBB Sousaphone player Kirk Joseph. Amazing! This player was belting out fluid funk bass lines that would make Bootsy Collins proud — on a horn made for marching bands.

And march he did, along with the rest of the horn section, into the dance floor area at the front of the stage for a taste of a New Orleans-style street parade. The band was very big on audience participation, by the way, and this played to the party mood very nicely. In addition to some call and response, DDBB vocalist Gregory Davis grabbed a trio of young ladies out of the audience to dance with the band on stage.

All DDBB musicians are seasoned players, and each got the opportunity for a solo during the two-hour-plus set. A special nod goes out to drummer Julian Addison, who blazed through an extended solo that left me dizzy. It translated very nicely through the State Theatre’s soundsystem, which rendered the entire set with clarity and detail.

Most of the DDBB set was very lively, but they did ease it down for a bit to offer a tender interpretation of Louis Armstrong’s “What a Wonderful World.” Promptly thereafter, they set the stage alight one more time with a final serving of Bayou boogie. I fully expected to exit the theatre afterwards and find myself in the French Quarter. No such luck. Nothing but cold winds blowing up Washington Street, but a little easier to bear thanks to a sunny show from a wonderful band.