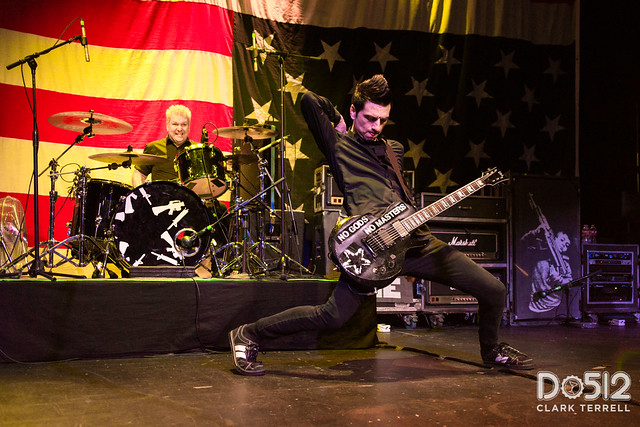 I anticipated the concert by Anti-Flag at U Street Music Hall on Saturday would be a nostalgia trip. Boy, was I wrong.

The angsty anarchist 14-year old inside of me was ecstatic to see one of the bands that helped me weather puberty, middle and high school, and the like. Unfortunately, any idea Anti-Flag has been riding some wave of past accomplishments would be utterly incorrect, and in fact downright insulting.

It was apparent that Anti-Flag promotes causes in which they believe, and exposing injustices that occur, over promoting their own music. These guys are genuine, earnest, political punks. The merch area alone was littered with various causes and activist groups.

Instead of the theatrical anticipative opening song conducive to touring headliners, the band walked out on stage to introduce one of the defendants and a volunteer involved with the Defend J20 group — the group of people being charged with up 60 years in prison for the Disrupt J20 protests in DC during the inauguration. While on the topic of unjust police actions, the band segued into “Fuck Police Brutality” to open the set. As hoped by many at the show, they also played “The Press Corpse,” arguably their biggest song.

To be clear: This show was not about the band. A few times throughout the set, spokespeople from the causes represented at the booths came up to give a quick spiel highlighting the cause’s efforts and agendas. They spoke a lot about community and working together. It is kind of difficult to not delve into politics in this review because Anti-Flag are experts in politically charging the audience; hence, their inspiration of numerous activists, some of whom were present to represent their cause.

The concert was a four-band bill at the U Street Music Hall, where I have not attended a non-house/electronic/dance music event until this show. The concert hall makes for one great punk show venue, although Anti-Flag bore the yoke of a hard cut-off time around 10pm — yes, it was an early show! In the last allotted two minutes of available time, they filled it with the one-minute “Fuck the Flag” to end the night.

Anti-Flag is a rare band that uses their well-earned platform to push awareness and advocate activism. Anomalous to the ad nauseum “Don’t be a dick” mantra nearly every band (except GWAR) spews, Anti-Flag brings the causes they believe in to their shows. They use their talents to highlight real efforts and encourage their fans to help to change things. And their music is really good as well.