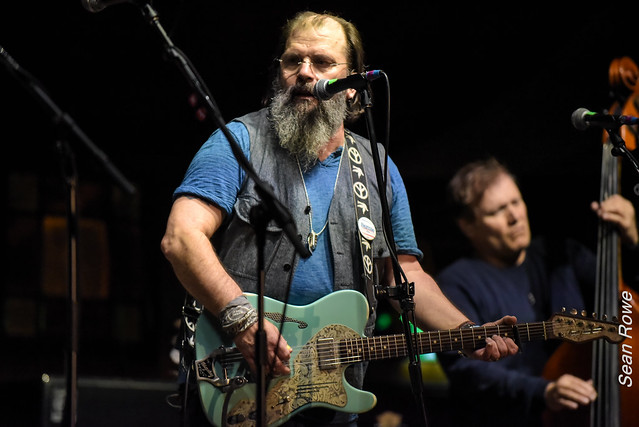 Bandanas were back in style as Steve Earle and his backing band, The Dukes, made their way to The Birchmere Tuesday on the 30th Anniversary of Copperhead Road Tour.

Steve took the stage to welcome the audience and to introduce the opening act, husband-and-wife duo The Mastersons, who also perform in The Dukes. Steve promoted their merch, as well as his own, inform the audience that they would be out after they show “pimping that shit.”

After a terrific set by The Mastersons and an intermission for the crew to set up for the main act, Steve and the band came out and played title track of Copperhead Road. The politically-charged song tackles Vietnam (and veterans) and the war on drugs, telling the story of a young man from a clan of Tennessee moonshiners who comes from back Vietnam and goes, instead, into the marijuana business. Steve named song the after a real road, which was eventually renamed because of sign thefts.

The next song, “Snake Oil,” attacked Ronald Reagan for his deceitfulness, while “Back to the Wall” addressed homelessness. After his third song, Steve stopped to express his solidarity with the recent March for Our Lives, and his excitement at seeing so many young people engaged in the political process. Guns were the topic of the fifth song of the concert (and accompanying album), “The Devil’s Right Hand.”

Thirty-one years ago, Steve told the audience, he was in London, “north London to be precise,” recording with some friends of his, The Pogues. Together, they recorded what became the fifth track on Copperhead Road, “Johnny Come Lately.”
When he finished playing, Steve said that was the end of side one. He talked about segmenting records. When records (and tapes) were physical objects, artists really thought about how to group songs on an album. Steve said that, especially now that vinyl is making a comeback, he wants to go back this way of making records.

Side Two of Copperhead Two, Steve said, is “the chick songs.” Steve told the audience that he hadn’t rehearsed these songs since 1988. Looking back, he can understand how he got married so many times in the ‘80s. (Steve has been married a total of seven times to six women.)

Steve had less stories from this part of the evening but did tell an interesting one about the last of the love songs, “Once You Love.” After releasing his breakthrough album, Steve got a lot of opportunities, one of which was appearing at Farm Aid. Steve said that he’s gotten to meet most of his heroes, at least the ones who are still around, “and only two have been assholes.”

One of the people Steve met was John Mellencamp’s guitarist, Larry Crane. Steve and Larry were hanging out together in Nashville in his efficiency apartment — Steve had just gotten divorced and was in a “transitional period.” At the time, Steve had a 1978 Cadillac which opened upward like the Batmobile. It looked very cool, but as nine-year-old Cadillacs are wont to do, it would often fail to start for no discernible reason. Steve wanted to replace it, but his manager told him he couldn’t afford it.

Steve and Larry decided to go on a beer run, so they got in the Cadillac. Of course, it didn’t start. Using his best judgment, Steve called a cab, went to a dealership, and bought a new car. Then he bought the beer, went home, and wrote the song with Larry.

The last song from Copperhead Road is a Christmas song, “Just a Child.” When Steve was on his last legs in Nashville, he got a job working for the Oak Ridge Boys as a songwriter. The Oak Ridge Boys had a very successful Christmas album, and they decided they would put out another one. As it goes in the music world, the call for Christmas songs went out to the songwriters in July.

To get his head around it, Steve’s closest friend got out and fully decorated a Christmas tree, solidifying Steve’s opinion of him as completely nuts. Steve got into the mental space without the use of props. By that point, he had kids, so Christmas had become about children. He focused on that to write that song. It wasn’t chosen for the album, so he kept it for later.

At the conclusion of Copperhead Road, Steve received a standing ovation. He next played three tracks from his 2017 album, So You Wanna Be an Outlaw — the title track, “Lookin’ for a Woman,” and “Firebreak Line.” That last song, Steve said, is about the men and women who fight wildfires, hotshots, who are “probably protecting a house the belongs to some rich asshole who should never have fucking built it there first place.”

Steve followed this with “My Old Friend the Blues,” “Someday,” and the title track and from Guitar Town. Then, he talked about making about an album with the Del McCoury Band (1999’s Mountain) and bringing the tour for it to The Birchmere. On that album, Steve sang a duet with Iris DeMent, “I’m Still In Love With You.” (My own love for country music began with hearing Iris’s phenomenal single, “Our Town,” on local public radio in the early ’90s.) On Tuesday, Iris’s part was sung by Eleanor Whitmore (of The Mastersons).

Steve rounded out the set with a mix of songs: “The Galway Girl” from Transcendental Blues, “The Week of Living Dangerously” from Exit O, and “If Mama Coulda Seen Me” and “Fixin to Die” from So You Wanna Be an Outlaw. After Steve finished his set, the audience gave Steve his second standing ovation of the evening.

The band left the stage, leaving Steve alone to address the audience while he strummed his guitar. Steve spoke for several minutes about his lengthy career, his personal life, politics, and future projects. Recalling an interview, he said the one word that best describes him is “romantic,” and just in the intimate sense. He also means in the sense of “Don Quixote shit, you have an impossible dream and you keep following it.”

When it comes to his own personal, intimate life, Steve said he just wanted what his parents had. His parents were together until his father died 11 years ago. His therapist says he keeps seeking partners he can’t be successful with because he really wants to be alone. If that’s true, he’s grown to enjoy being on time. Plus “even in New York, you can get one ticket to anything, and I’ve seen Hamilton three times.” And he can watch all the baseball he wants, “Thank God it’s finally here.”

Reflecting on his Grammy-winning album (Best Folk Album, 2004) The Revolution Starts Now, Steve said that he wants to do another highly political album, but he wants to be more careful this time. When he went to the studio with Revolution, he only had two and a half songs written; he took out a sheet a paper and forced himself to write a song every day. Steve wants to listen more and reach people who he thinks could’ve voted the way he did but didn’t. (Hint: Steve is a socialist who tends to vote Democrat as a compromise.) He also wants to time the album to come out closer to the next major election.

Steve told a humorous story to the effect that “I think we’ve proved that reality TV is bad for you.” He said he used to lay upside down on an inversion and watch Cops while he smoked crack. He hasn’t touched any of those things since.

While he’s hanging back on the political project, Steve’s next record is going to be an album of Guy Clark songs. Guy was one of Steve’s mentors (the other was Townes Van Zandt).

The band returned, and Steve played the final song of the evening, an acoustic piece, “The Girl on the Mountain.” At the conclusion of the concert, Steve received a third standing ovation. Including the encore, Steve played for two just over two hours, and 24 songs.

Steve Earle returns to our area on June 17, when he’ll be performing at the MGM National Harbor with Lucinda Williams and Dwight Yoakam on the LSD Tour in what is sure to be one of the area’s best country music concerts of the year. (Buy your tickets for Steve, Lucinda, and Dwight at MGM National Harbor online.)