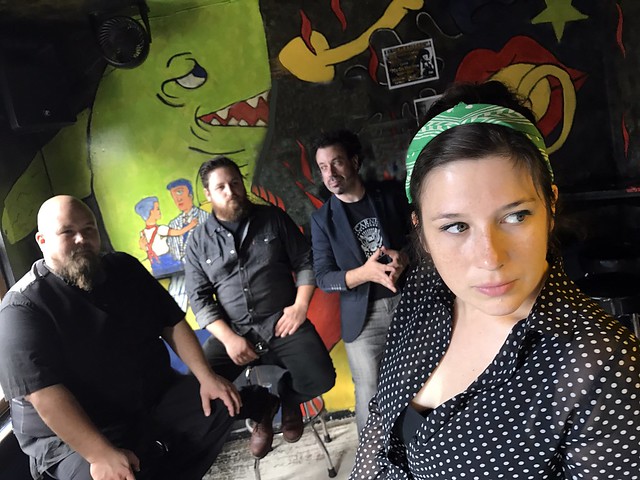 The Claudettes (Photo by Donna Drapeau)

The Claudettes released Dance Scandal at the Gymnasium!, the band’s third full-length for Yellow Dog Records and first to feature their touring lineup of piano, drums, bass guitar, and three singers, on March 23. The Claudettes visit Hill Country Live for a *free* record release show on Thursday, May 17!

Pianist Johnny Iguana formed The Claudettes with Berit Ulseth on vocals, Zach Verdoorn on bass guitar and vocals, and Matt Torre on drums. The Claudettes combine the Chicago blues-piano tradition with the energy of rockabilly and punk and the sultry sound of ’60s soul-jazz to create a new spin on American roots music — whew!.

Watch the official music video for “Don’t Stay With Me” by The Claudettes on YouTube:

The new album was produced by Mark Neill, who also has worked with Black Keys, Paladins, Old 97’s, and JD McPherson. “Mark insisted that, no matter how loudly we crank amps live, we record at conversational level, so he could turn his vintage preamps up and use his best old mics,” said Johnny Iguana.

Mark described the result: “Haunted cabaret… David Lynch movie music crossed with Allen Toussaint’s driving piano sound! And sort of like when you’re driving late at night in the South and two radio stations are coming in together and it’s perfect!… Like Otis Spann and Mark Sandman from Morphine sitting in with Keely Smith. I’m kind of riffing here but seriously nobody sounds like them … I love this new record, it’s crazy good.”

The show is free!

The Claudettes
Hill Country Live
Thursday, May 17
Doors @ 8:30pm
No Cover
All ages