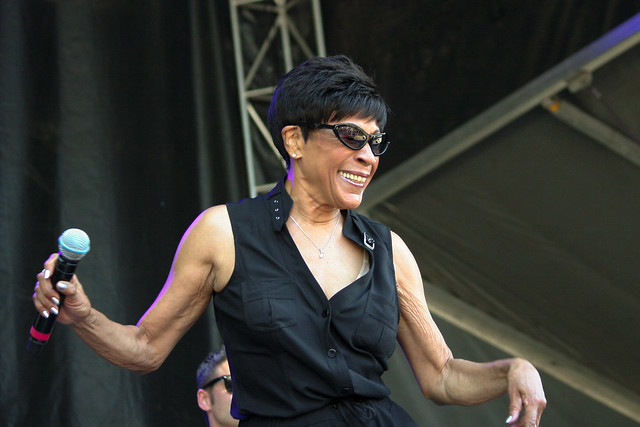 R&B singer Bettye LaVette graced The Hamilton with her divine presence on Saturday. Looking much younger than her 72 years, fit and trim, Bettye performed with bountiful energy and flawless style.

It’s important to distinguish between interpretations and covers. Bettye performed interpretations of Dylan’s songs, not covers. She changed the lyrics to fit her personal style, to fit the songs being sung by a black woman. The musical arrangement of the tunes also differed from the classic Dylan formulations of the songs. Her new record, which is fantastic, features guest appearances by Trombone Shorty and Keith Richards.

Bettye used a lyrics sheet during her performance. She said that trying to learn 12 Dylan songs at the age of 72 was an exercise in futility; it just wasn’t going to happen. She brought to the audience’s attention a pair reading glasses she had been sold as being cool, and felt swindled, as they looked like something Elton John might wear.

The soul singer shared several observations about Dylan. “He complains about everything,” she said, including “the paint on the wall.” But, she said, “He never tells you how he feels. He just “registers the complaint.” Bettye also said that it took nine verses for Dylan to say what a black woman would say in four.

The crowd was sophisticated and smartly dressed. A friend felt she was underdressed. I was definitely on the more casual end in jeans and a polo shirt. This concert attracted an older audience, which tended toward more formal dress, although my impression is that The Hamilton may lean more formal than, say, The Birchmere, a similar-size venue.

I watched most of the concert from the upstairs bar. Near the end of the concert, an alarm went off, indicating that there was a fire and instructing patrons to exit the building. No one seemed especially alarmed. I asked the bartender, if there were a real fire, they’d be pulling Bettye offstage, right? The bartender told me that it was just the smoke machine, and there was nothing to worry about. Not wanting to listen to the alarm, I went to the downstairs bar for the last few minutes of the set and Bettye’s encore.

For her encore, Bettye first sang “Before the Money Came,” from her album Scene of the Crime, about how she toiled for nearly 40 years before earning much as a musician. Then, the band left the stage and she finished the evening with an acapella cover of Sinead O’Connor’s “I Do Not Want What I Haven’t Got.” The crowd, which had been respectful throughout the evening, gave Bettye a standing ovation as she left the stage.