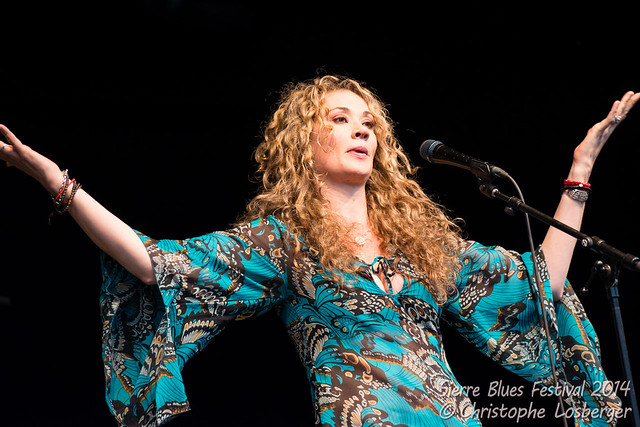 Have you seen Across the Universe? If you’ve seen the 2007 Beatles musical film, then you’ve seen Dana Fuchs. In the film, Dana plays Sadie, an aspiring singer; her name comes from the song “Sexy Sadie.” Most memorably, Dana sings “Helter Skelter” in the movie.

New Jersey-born, but raised in small-town Florida, Dana moved to New York at 19. She started focusing on singing and songwriting in the late ’90s, performing in blues clubs. She met guitarist Jon Diamond, who would become her producer, and they formed the Dana Fuchs Band. She released her first record, Lonely for a Lifetime, in 2003.

Dana also pursued a career in theater, making a reputation for herself as the lead in the off-Broadway musical Love, Janis about legendary singer Janis Joplin, from 2001-2003. Her low, raspy voice drew comparisons to the legendary Texas crooner, leading Julie Taymor to choose her for Across the Universe.

After Across the Universe, Dana decided to dedicate herself to her singing career, and she has eschewed acting roles. She put out a live album in 2007, and two live and three studio albums since 2011. Her most recent record, Love Lives On, funded through PledgeMusic and recorded in Memphis, came out on May 18 on her own label, Get Along Records.

On Saturday, Dana brought her Love Lives On Tour to DC’s Hamilton. When the band played her on, it occurred to me just how apt it was that Dana took her name in Across the Universe from “Sexy Sadie.” Dana is breathtakingly gorgeous, and statuesque at six feet tall – “six-foot-five in these heels” she said, and she easily towered over her all-male band. (The band consisted of guitar, bass, drums, piano, trumpet, and sax.)

Dana didn’t merely sing the new album; she guided the audience through it, providing background on every song. She shared personal stories of the family tragedies she’s endured, strained relationships and reconciliations. Before singing “Faithful Sinner,” she talked about how her relationship with her father changed over time.

Many of Dana’s songs deal with the heartbreaking loss of family members, and she appeared very emotional at times during the concert. Dana has lost both parents and three of her siblings. She interrupted “Callin’ Angels,” which contains a verse for each of her lost family members, to speak about the passing of her mother a couple of years ago, just as she learned she was going to have a child.

Townes Van Zandt once said about his songs (and no one knew if he was joking), “They’re not all sad. Some of them are hopeless.” You might be wondering if this describes Dana Fuchs’s music, and the answer is no. While her set contained some heavy, somber stuff, it had rocking numbers that tore the house down, like “Backstreet Baby,” and, unexpectedly, an original country song. She also covered the Otis Redding classic “Nobody’s Fault but Mine,” and performed a “soul gospel” arrangement of Johnny Cash’s “Ring of Fire” that had the audience singing along.

Unusual for a show of this size, Dana took audience requests. She sent the band to the back, except for Jon Diamond, who accompanied her on acoustic guitar, and invited the audience to make requests. From the requests, she sang “Songbird, Fly Me Away,” about her late sister, who committed suicide in 1994.

Several members of the audience requested “Helter Skelter,” Dana’s signature tune in Across the Universe. I think that many of them expected Dana to perform it, and their expectations only increased when she took requests. Some may have been disappointed not to hear it. There were plenty of fans, however, who like me, were there for Dana’s original material.

After the show, Jon Diamond came out to man the merch table. Dana joined him a bit later to greet fans and sign albums.Dana has a phenomenal voice and a terrific backing band. This is a can’t-miss act for blues fans, with strong appeal for rock and soul listeners. Catch her on her international tour through October!