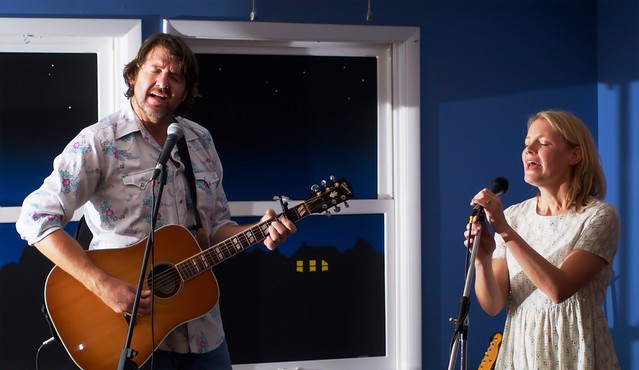 In a study of darkness and light, queen of Austin country Kelly Willis shared a double bill with Chris Knight at The Birchmere on Friday.

Playing first, Chris had a sparse presentation, just himself and his sideman, all acoustic. Chris’s songs were dark and somber; at one point, Chris referred to having gotten through “all of his killing songs” half-jokingly, adding he had specific categories of killing songs. Chris is a little dark.

Kelly Willis, by contrast, was all brightness and light, accompanied by a full band, telling stories about how her songs related to her husband and her children. Kelly is currently touring to support her new album, Back Being Blue, and mixed tracks from the new album with her older material. For example, she began her set with the title track from her new album, followed by an older song, “If I Left You,” from her 2002 album Easy.

Introducing “Only You,” Kelly said it started out as a sincere and tender love song, but as she wrote it, it turned into something sneering and accusatory. Next, Kelly and her band played “Heaven Bound,” the first of two songs that night written by Damon Bramblett, who Kelly described as one of her favorite songwriters. She then played the title track from 1999’s What I Deserve. Explaining the retro vibe of “Modern World,” Kelly said that she originally had in mind the style of 1950s duo The Louvin Brothers, but it “jumped a few decades.”

In 1996, Kelly married fellow artist Bruce Robison. Kelly said she first heard her husband’s song “Wrapped” while sitting at the bar in Austin’s famed Continental Club with her brother-in-law. They looked at each other and both said, “I’m recording it.” Kelly recorded it first, but “What matters,” she said, “is that George Strait recorded it last.”

After playing “Wrapped,” Kelly delivered another original from the new album, “The Heart Doesn’t Know What It Wants,” followed by “Heaven is Just a Sin Away,” from Kelly’s self-titled 1993 album. Then, Kelly and her band played the second Damon Bramblett song, “Sweet Sundown.”

Kelly told the audience that she and her husband made a lot of new friends in the last few years, and when she was putting together the new album, she asked some of them for songs. One of those new friends was Rodney Crowell, but she wasn’t sure if it would be presumptuous to ask him. (Rodney is a big deal in country music. He’s had five #1 hits; he’s won two Grammys, and he’s been nominated for six more, and that’s just the tip of the iceberg.) She did ask, however, and Rodney happily contributed “Next Time We’ll Do It for Love.”

Vowing she would play one more song by her husband than by Damon Bramblett, Kelly launched into the night’s second Bruce Robison tune, “Not Forgotten You.” Kelly then spoke of her admiration of admiration for another singer-songwriter with Austin ties — the bluesy Marcia Ball — and covered her “Find Another Fool.” Following that Marcia Ball cover was “Afternoon’s Gone Blind,” another number from the new record.

The next song, “Take It All Out on You,” inspired another story. It was the third and final Bruce Robison song of the evening, and Kelly recorded it for her 1993 album before they were married, but during a time when they were broken up. Bruce was hanging out with Mas Palermo, Kelly’s ex-husband, with whom she was on good terms, but she still wasn’t very happy about that. Bruce and Mas — Kelly’s two exes — cowrote the song about Kelly, and Kelly got a hold of it from Mas, and she liked it so much she recorded it. The song qualifies her song to be a country singer, Kelly joked.

Just like any other mom with teenage kids, Kelly does a lot of driving. She wrote the song “Freewheeling,” for the current album while driving her daughter around. While the daughter in question put up a façade of annoyance, Kelly later caught her humming the melody.

Toward the end of her set, Kelly and the band played “Get Real,” a song she co-wrote with Jon Leventhal, who she described as an amazing guitarist (as well as Roseanne Cash’s husband). She finished her set with the last song from the new album, the Jeff Rymes and Randy Weeks-penned “Don’t Step Away.”

The audience, which had been enthusiastic throughout Kelly’s set, gave her a standing ovation. Kelly and the band returned to the stage for an encore, playing Australian Paul Kelly’s “Cradle of Love” and Marshall Crenshaw’s “Any Way the Wind Blows.”