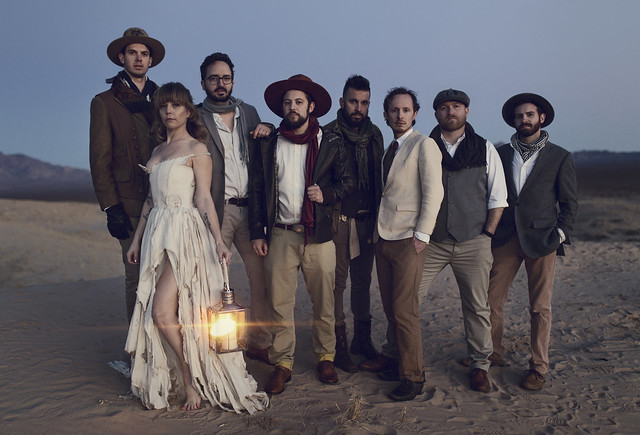 The Dustbowl Revival, the eclectic eight-piece Americana band from Venice, California, took a sonic leap with its most recent self-titled album, released last year via Signature Sounds. The band jumps onto stages at The Hamilton in DC on Thursday, June 21, and The Soundry in Columbia, Maryland, on Friday, June 22.

Critics say the band “would have sounded utterly at home within the hallowed confines of Preservation Hall in New Orleans’ French Quarter” (no less than the Los Angeles Times) and their “upbeat, old-school, All-American sonic safaris exemplify everything shows should be: hot, spontaneous, engaging and, best of all, a pleasure to hear” (always in-tune LA Weekly).

On “Got Over” from the new album, founder and singer Zach Lupetin delivers a modern-day portrait about a scuffed-up soul battling a whirl of problems who winds up “sitting on the kitchen floor… eating all the ice cream, 2am on a Tuesday.”

Watch The Dustbowl Revival perform “Got Over” live in a session for Layman Drug Company’s Live from Layman sessions on YouTube in October:

The Dustbowl Revival found a bigger audience in 2015 when Signature Sounds released the album With a Lampshade On. The video for “Never Had to Go,” starring Dick Van Dyke, became an Internet sensation.

See for yourself what the buzz is all about! Buy your tickets online for The Hamilton or for The Soundry.