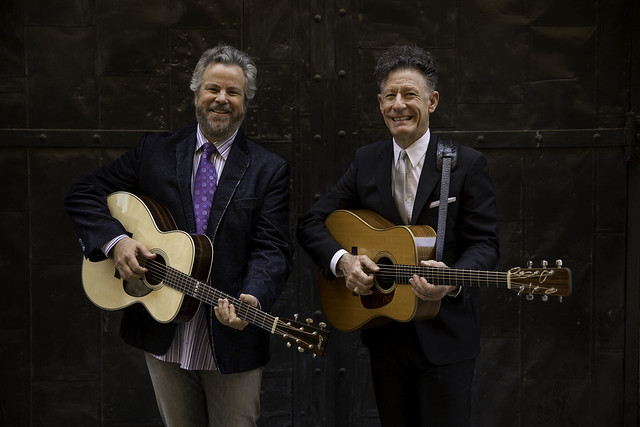 Robert Earl Keen and Lyle Lovett at the Paramount Theatre in Austin, Texas, on May 22, 2013. (Photo by Daran Goodsell)

This April, Rolling Stone Country published a feature on Robert, “How Robert Earl Keen Became a Country and Americana Cult Hero.” The piece discusses how Robert, who has never achieved mainstream success, has nonetheless become a highly respected figure among other artists. Many have recorded his songs, including George Strait, The Highwaymen, the Dixie Chicks, Joe Ely, Nanci Griffith, Gillian Welch, Shawn Colvin, and Todd Snider.

I first remember hearing one of Robert’s songs at the 2004 Austin City Limits Festival, when Joe Ely played his signature tunes, “The Road Goes on Forever,” although I didn’t know, at the time, who wrote it. The song, with the memorable refrain, “The road goes on forever and the party never ends,” tells the epic, tragic tale of small-town waitress Sherry and Sonny, the small-time pot dealer who comes to her rescue. Robert and his band closed out their main set with it, jamming for several minutes.

Robert co-wrote another signature piece, “The Front Porch Song,” with Lyle Lovett when they were students at Texas A&M University. Robert’s storytelling is also the stuff of legend, and he went into detail about the origins of this song and his friendship with Lovett. Robert began this tale of a diner, an abandoned movie theater, and a landlord, and played it for Lyle. Lyle came back and said he’d added some lyrics, and played the song. “Is that the song you played for me?” Lyle asked. “No, that is not the song I played for you,” Robert said. “That is a beautiful song.” Robert told the audience, “That was my first experience of being part of something truly beautiful, really spiritual.”

Despite never having a hit song or album, as the Rolling Stone article discusses, Robert has an absolutely rabid fanbase. Even with the ticket price for his show set above that for artists who had achieved considerably more mainstream penetration, Robert’s show still sold out. His fans know every song by heart, every lyric. I’ve never seen anything quite like Tuesday’s show. On every one of Robert’s own songs that he played — he played a few covers, too — the audience sang along, word for word. Every song, all night. Even after the encore, the audiences chanted “One more song!” as the house lights came on.

In what may or may not have been a coincidence, Robert and his band played Dave Alvin’s “Fourth of July,” which Dave played at the Birchmere last week. (I was briefly amused by the thought that it would it be hilarious, in an Andy Kaufman way, if Robert did Dave’s set, song for song.) They also covered Todd Snider’s “Play a Train Song.” Robert closed the evening with a deep cut from of the greatest singer-songwriters from Texas, Townes Van Zandt, “I Gotta Go,” which I hadn’t heard.

A Robert Earl Keen concert is a unique experience, and I absolutely loved it. I can say that everyone there did, too!

I also should devote some bandwidth to Robert’s opening act, Zane Campbell. Discovering wonderful artists is one of my great joys. Often, I’m unfamiliar with the opening acts at shows I go to show, and sometimes one turns out to be a revelation. That happened at the Sarah Shook show I covered, when I saw Zephaniah Ohora play. It happened again Tuesday when I saw Zane Campbell.

In his late ’50s, Zane might seem like an unlikely figure to hold an audience at rapt attention. But once he starts hitting his acoustic guitar strings like the “hillbilly madman” The Washington Post called him and belting in his powerful voice, which has some Johnny Cash in it, you can’t take your eyes off him. Zane has a hard country sound, unsurprising from the scion of a family that goes back to the music’s earliest days, with a sneer that just might come from his years in New York’s punk scene. If you’re interesting in finding out more about Zane, read his profile in The Washington Post.