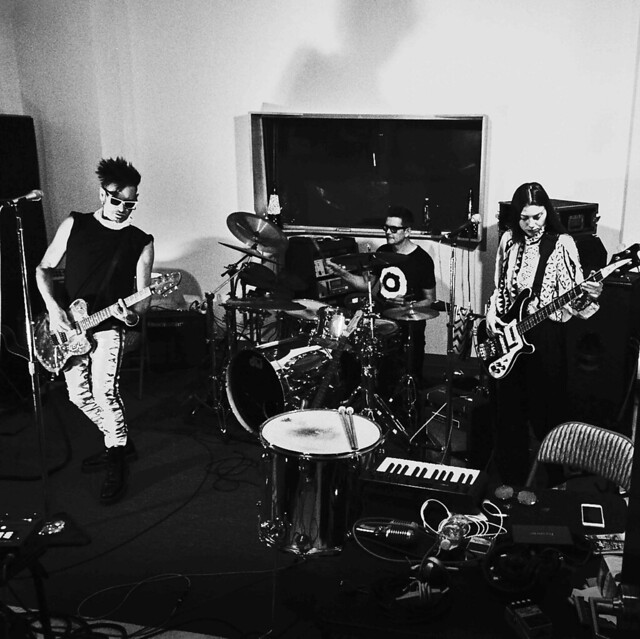 Daniel Ash and Kevin Haskins, famous for their stints in Bauhaus, Tones on Tail, and Love in Rockets, came together again to form Poptone in 2017, recruiting Kevin’s daughter Diva Dompé to perform as a trio. With a self-titled debut album released only days ago, Poptone will perform a set drawing largely on the songs of Tones on Tail and Love and Rockets at The Fillmore Silver Spring on Sunday, July 1.

With Daniel on vocals and guitar, Kevin on drums, and Diva on bass, Poptone successfully toured the US west coast last year. (Parklife DC snapped them at the Cloak and Dagger Festival in October!) Poptone released its first album via Cleopatra Records on June 8 after releasing “Go!” and “Movement of Fear.”

Listen to the self-titled album by Poptone on Bandcamp:

One morning in February 2017, Daniel woke up and realized he had to play live again. He took the name “Poptone” from a 1979 PIL track and took the the road with Kevin and Diva to rekindle the music of Tones on Tail, a fine catalog of post-punk tunes that were not performed live for more than 30 years.

To date, Poptone has performed only 27 live dates, but they promise more with sets drawing from Tones on Tail with a sprinkling of solo Daniel Ash, a healthy dose of classic Love and Rockets, and a dash of Bauhaus along with the occasional odd inspiration.

“It’s been quite a remarkable journey so far! We as a band have been overwhelmed by our loyal following turning up in big numbers and celebrating all the music we have made over the past 40 years. We love our audience!” Kevin said.

He added: “Performing all these marvelous songs from our back catalog has made me really appreciate what a great songwriter and guitarist Daniel is! Touring with my very talented daughter Diva, takes it to dizzying new heights. The addition of six more songs that we are playing on this new leg of the tour has for me, really cemented our legacy. I feel very grateful and blessed to be a part of this and very much look forward to the forthcoming shows.”