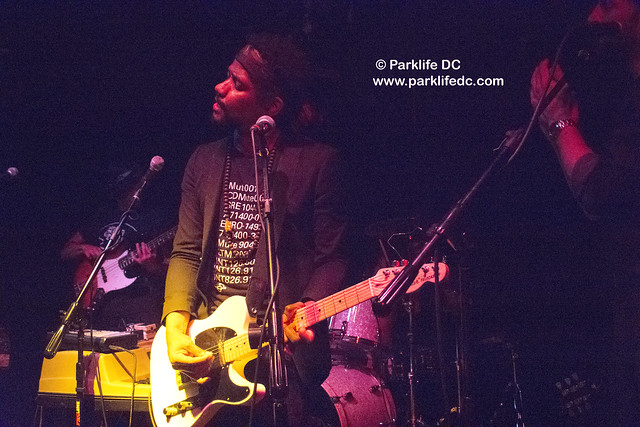 You’ll believe in the effectiveness of soul music as a form of protest when you see Algiers, the experimental rock quartet from Atlanta.

Frontman Franklin James Fisher has a powerful voice that goes low or hits high when called upon to do so, but mostly it booms gracefully through a room as it did at Black Cat on Thursday.

Last year, Algiers released The Underside of Power, their second studio album, via Matador. Listening to the title track live on Thursday was a crash course in how music can challenge you. Underneath the impressive wails of “The Underside of Power” was a message of disenfranchisement and objectification — of suppression. And it’s a message that Algiers would have you take very seriously.

Early in the show, Franklin got local, dedicating the song “Animals” to the memory of Keith Warren, a 19-year-old black teenager murdered in Silver Spring in 1986, according to forensic reports, but his death was brushed off as a suicide. Franklin fired the frenetic number straight into the air as a warning as he twisted from keyboard to guitar and occasionally to the floor. Don’t let these things be forgotten, the song declared, lest you become part of the pack of animals perpetuating injustice upon those lost.

Interestingly, Algiers melodically decamped into a psychedelic soul groove that fit Franklin’s voice very well, but occasionally they thumped into post-punk rhythms. Such was clearly the case with “Animals,” for example, and the driving force of the instruments heightened the urgency of the song. The “post-punk meets gospel” shorthand I referenced in our preview of the show came to a head in moments like these, when you hear the immediacy of both genres materialize instantly and understand that Algiers worked this sound as a comprehensive whole. The gents might be folding a lot of influences into their music, sometimes subtly, but the final product stood on its own.

Algiers became downright symphonic and much more overt with “Death March,” a literal statement against fascism. The song also slowed to the tempo of a march, leaving behind the buoyance of some other songs that perhaps were easier for dancing.

But there was nothing easy about Algiers, who have plenty to say and quite a few different ways to say it at their disposal. I suspect these gents will be around a while indeed with more frank declarations expressed through innovative musical collisions.

Algiers wrapped their current US tour leg last night in Brooklyn, and the band is heading to Europe. When they return, let’s hope that they occupy a bigger stage, where they can let the full vision of their performance expand. Here are a few pictures of Franklin James Fisher fronting Algiers at Black Cat on June 28, 2018. 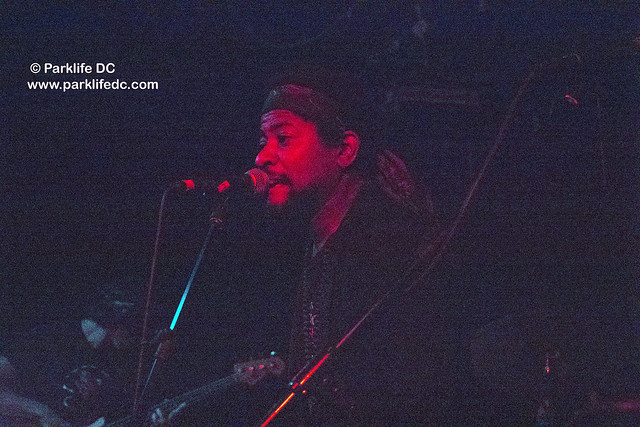 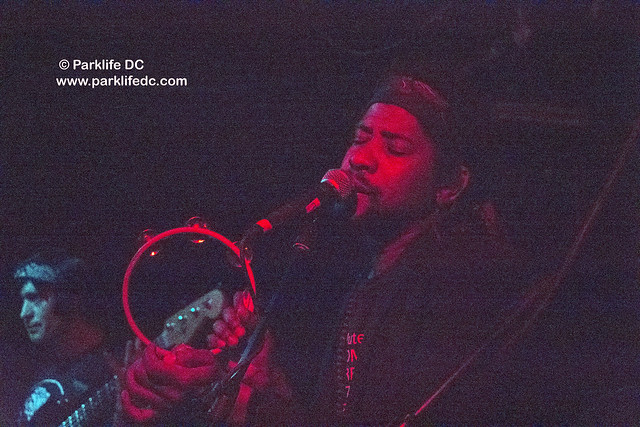 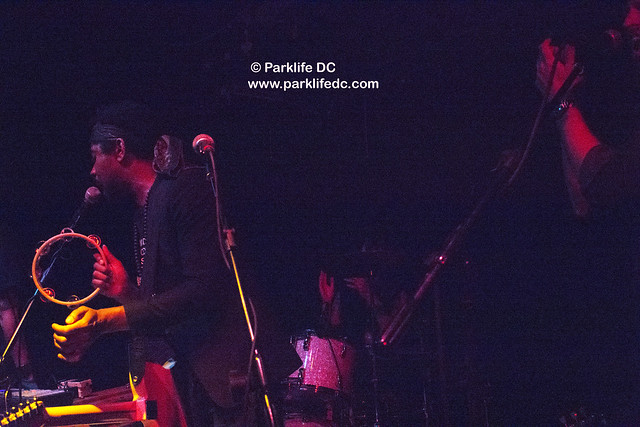 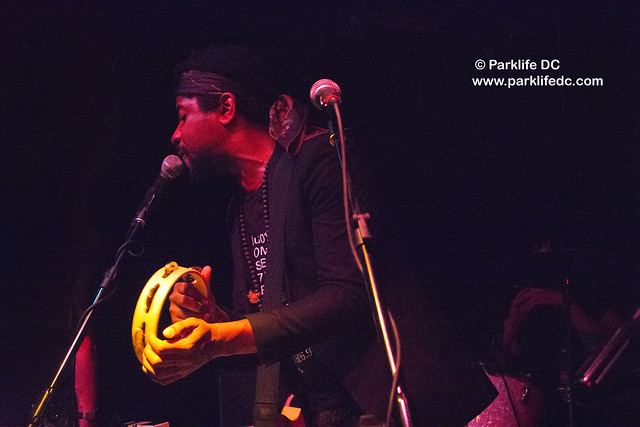 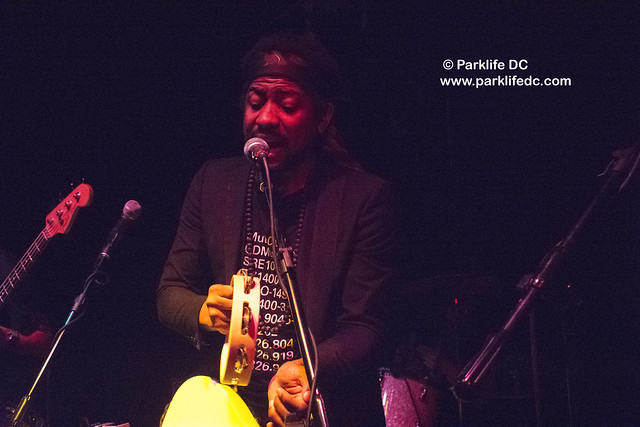 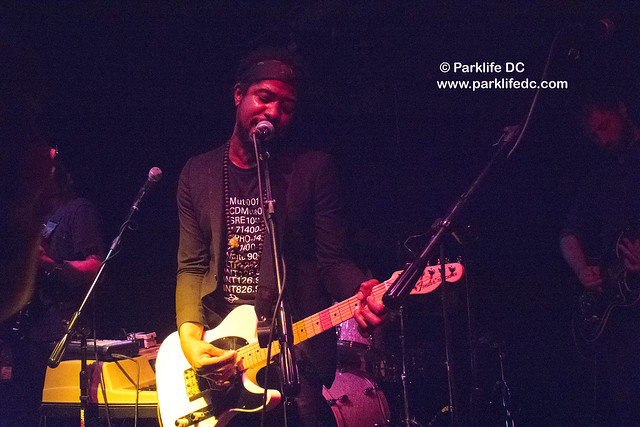 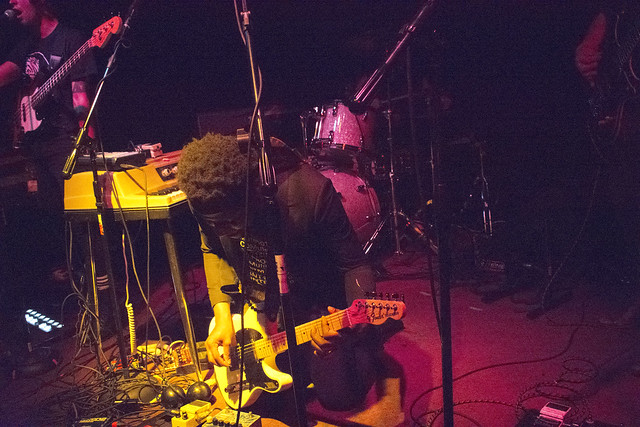 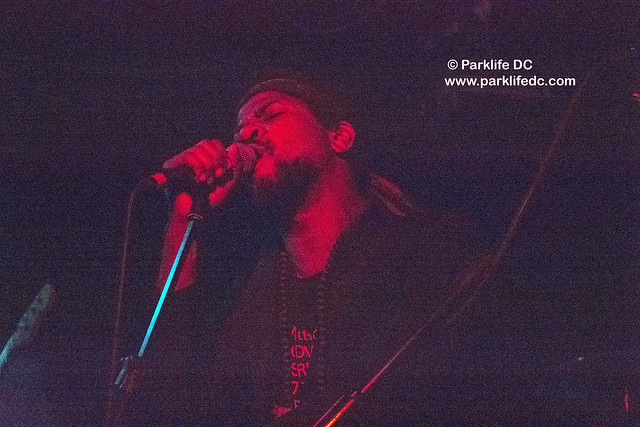