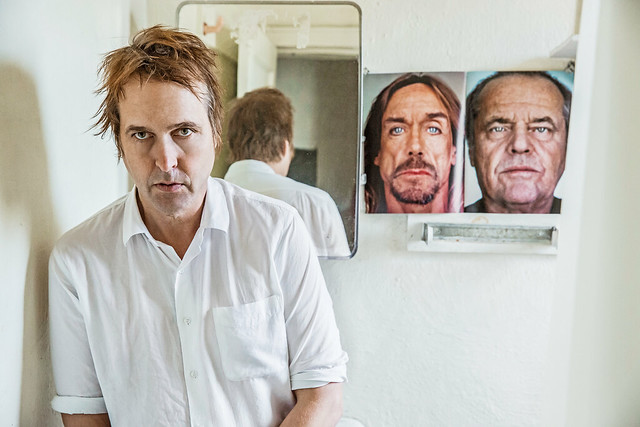 Chuck Prophet and the Mission Express played to a crowd of loyal fans on Wednesday night at The Soundry, a relatively new venue in Columbia, Maryland. Chuck, channeling all his of San Francisco weirdness, played his oddball schtick to the hilt. His guitar playing was tight as always, and his band sounded great.

My friend Paul, who attended the show with me, told me that Chuck has had a stable band for a long time now. The cornerstone of the band is Chuck’s wife, Stephanie Finch, who plays keyboard and guitar and sings. Chuck and Stephanie live in his hometown of San Francisco, in the Castro district.

“Castro Halloween” comes from Chuck’s Temple Beautiful (Yep Roc, 2012) album, which was all about San Francisco. Chuck played another song from that album, “The Left Hand and the Right Hand,” a tale of fraternal love gone wrong. This song had a backstory, too.

Growing up in San Francisco in the ’70s, Chuck was very aware of Jim and Artie Mitchell, who he called “the Cain and Abel of strip club owners.” The Mitchells owned the O’Farrell Theatre, a strip club and X-rated with a second-floor studio where they made porn. Chuck said they were constantly in the papers. A newly elected city councillor, Dianne Feinstein, had her picture taken in front of O’Farrell’s promising to clean up the neighborhood. The next day, Jello Biafra frontman of the legendary Bay Area punk band Dead Kennedys had his picture with a vacuum cleaner, promising to clean up a different neighborhood. Chuck wanted to hang out with these Mitchell brothers when grew up.

So it went on. The Mitchells became plaintiffs in important free speech cases; Chuck elicited a round of applause for free speech and free speech heroes. (He didn’t mention that they’re also responsible for the FBI piracy warning that precedes all movies. Thanks a lot for that!) Unfortunately, in 1991, Jim shot and killed Artie. Jim avoided a murder conviction, but served three years after he was found guilty of voluntary manslaughter.

Listen to Bobby Fuller Died for Your Sins by Chuck Prophet on Bandcamp:

Chuck played several songs from his most recent album, Bobby Fuller Died for Your Sins (Yep Roc, 2017). The album takes its name from the singer of “I Fought the Law,” who died mysteriously in his parked car outside his Hollywood apartment just as he was becoming famous in 1966. Chuck describes the album as “California noir,” a meditation on “the tension between romance and reality that lurks underneath the surface in all noir films and paperbacks.”

For his encore, Chuck closed with the song “Bangkok” by Alex Chilton, the lead singer of the best band you’ve never heard of, Big Star. (Bangkok comes from his solo career after Big Star.)

Chuck’s performed Wednesday night in Columbia at The Soundry and on Thursday at the Hamilton; both venues are owned by the same management. I have no doubt that the audience at The Hamilton got a show just as good mine!