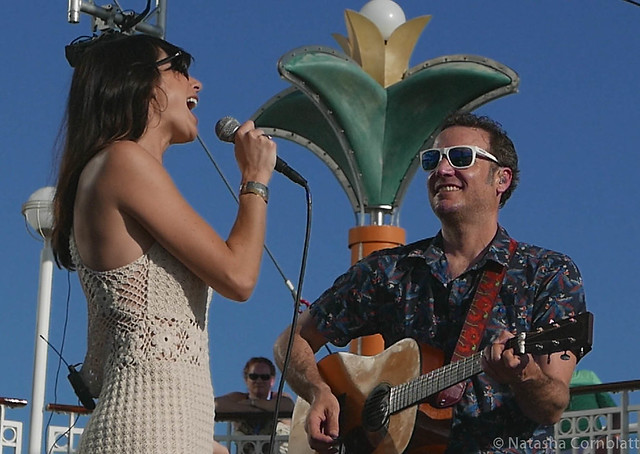 Phenomenally talented and equally lovely singer-songwriter Nicki Bluhm (pronounced “bloom”) played to an enthusiastic full house at DC’s The Hamilton Friday evening. Touring behind the May release of her new album — To Rise, You Gotta Fall (Little Knickers/Compass) — Nicki brought a Memphis-flavored soul sound that had the audience dancing, from little kids to senior citizens.

Nicki played acoustic guitar on some songs, while on others she just sang. She was accompanied by a four-piece band: an electric guitar, an acoustic guitar/fiddle, keyboard, and drums. The bulk of her set consisted playing through her new album in the recorded order, followed by some crowd-pleasing covers of classic songs.

The area in front of the stage was cleared to create a dance floor. Over the course of Nicki’s performance, the dance floor gradually became more packed. And it was packed with everyone: couples, older folks, packs of friends, moms with their kids. I even joined the dancefloor when Nick started singing blue-eyed soul classic “Son of a Preacher Man,” made famous by Brit singer Dusty Springfield.

In 2015, Nicki separated “musically and personally” from her husband, Tim Bluhm, of Bay Area cult outfit the Mother Hips. Tim had band a member, and the musical director, of her band, Nicki Bluhm and the Gramblers. (FYI, the term “grambling,” according to Urbandictonary, “is generally thought to have originated in California as a combination of “gambling” and “rambling.” It can describe living an unconventional, adventurous and sometimes risky lifestyle associated with traveling, independence, playing music…) He left after they recorded their last album, Loved Wild List. The band toured without him, but did not record again.

Watch the official music video for “To Rise, You Gotta Fall” by Nicki Bluhm on Youtube:

After her divorce, Nicki made a big life change, dissolving the Gramblers and moving from San Francisco to Nashville. She recorded in Memphis, at Sun Studios, absorbing herself in the city’s soul sound tradition. While still in the Americana tent — hey, there was a fiddle sometimes, right? — this marked a change from earlier her work, which was more twangy. Nicki may been better known with Gramblers for their viral hit on Youtube in 2012 with the very different Van Sessions, in which the band covered classic songs. Their cover of Hall & Oates “I Can’t Go for That,” released in 2012, was viewed more than 1.4 million times in a short period of time (now more than three million) and gained them national attention, including an appearance on the ESPYs. In 2012, Nicki also modeled for the Gap ad campaign “Icons Redefined.”

After the show, Nicki went straight to the merch table to meet with fans, sign memorabilia, and pose for photographs. I waited in line to meet Nicki, and she was absolutely delightful. We chatted briefly about her song “It’s Ok Not to Be Ok,” about her Italian father’s inability to express emotions. My own father, I told her, calls a few times a week to speak with me for about 45 seconds to a minute. Nicki posed for a very nice photo that I added to my growing gallery of pictures with musicians. It was a perfect end to a great night of music and partying — and a show definitely worth catching.