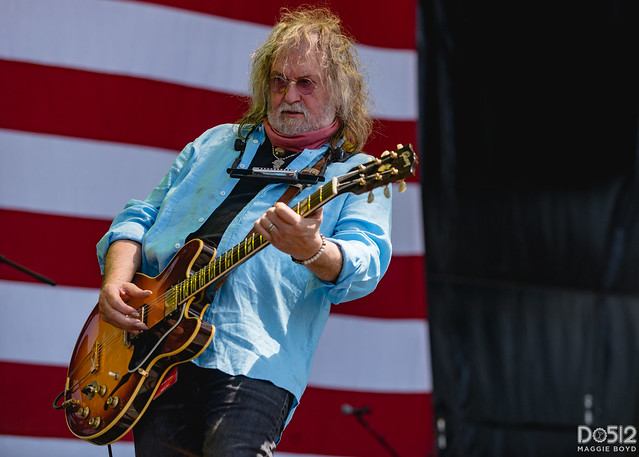 Outlaw country musician Ray Wylie Hubbard delivered an evening of great music and stories to a full house at DC’s City Winery on Saturday. “I was not expecting this,” the Oklahoma-born, Texas-based singer-songwriter told the crowd, seeming genuinely pleased at the turnout. Playing mostly crowd-pleasing favorites spiced up with delightful stories and anecdotes from a life on the road, Ray had the crowd at rapt attention.

When I went to see Willie Nelson in May, he’d released a new album within the month. Even so, his set consisted almost entirely of his greatest hits. With age, artists develop the repertoire of songs to do that, and some of them develop the desire to make their fans happy.

Ray told the audience that he doesn’t play his biggest song, “Up Against the Wall Redneck Mother,” every night, but he understands that they come to hear it. He went to see Bob Dylan in the ’80s, and he was crushingly disappointed when Dylan didn’t play “Masters of War” — or Ray joked, Dylan played it and he couldn’t recognize it.

Throughout the evening, Ray flashed his keen sense of humor. When he played “Tell The Devil That I’m Getting There as Fast as I Can,” he talked about recording the song with Lucinda Williams and Eric Church. Ray then mentioned that he’d recorded a video, too, and joked that none of us should mention it to Lucinda or Eric.

Diving headfirst into very particular bag of tricks, Ray came up with “Snake Farm,” a song about a woman the protagonist knows at — you guessed it — a snake farm. It was weird and a little dirty and oddball-funny, a description which might capture Ray Wylie Hubbard. “As you may have figured out,” he said, “I’m an acquired taste.”

Ray appeared as part of a trio Saturday, playing lead on acoustic guitar, backed by electric guitar and drums. Ray’s son, Lucas, played rhythm on the electric guitar, and Ray was obviously very proud of his son and delighted to be playing with him. On the song “Mother Blues,” a winding, crazy tale that ended with Ray’s marriage to his wife and the birth of his son, Ray added a spoken verse about Lucas.

Ray got the crowd involved, turning a few sings into singalongs. He silenced the band and let the crowd lead, mercifully calling for tempo and having the drummer lay a beat for the audience to follow. At one point, after the audience had fallen completely apart trying to sing, he cracked up, saying, “I was going to tell to you skip buying my records and get a metronome, but I don’t have any records to sell. We flew up here.”

Ray played a couple of new songs for the audience, including a tribute to Tom Petty. Ray was almost apologetic about playing the unfamiliar songs, explaining that he had to learn them because “we’re going to release them in a few weeks.” I can’t speak for anyone else, but I was excited to hear about a new album and to be hearing a few of the tracks on it.

Mixed with his odd humor and country charm, Ray has a very deep, poetic side to him. He talked about writing “Drunken Poet’s Dream” with Hayes Carll after Hayes introduced him to the French Romantic poets and reading Rilke.

Ray put on a fantastic show on Saturday night. I think the only thing that would’ve made his fans happier would’ve been if they could’ve bought his merch. Country and Americana fans will love this classic Outlaw!