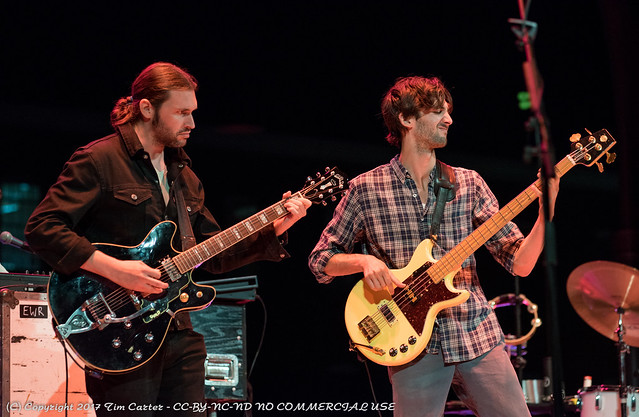 In front of me in the pavilion, a middle-aged woman, her black hair showing hints of gray, danced and shook, obviously thrilled to be in attendance — and she could have been the spirit of the show. Dawes, who have been active since 2009, attracted many younger fans as well.

Although Dawes released an a new album earlier this year, Passwords, their set did not focus on that to the exclusion of their other popular material. They opened with the lead track from Passwords, “Living in the Future,” and they included two other songs from it, “Feed the Fire” and “Crack the Case.” Dawes played two songs from 2011’s Nothing Is Wrong — “If I Wanted Someone” and my personal favorite, “A Little Bit of Everything.”

Listen to Passwords by Dawes on SoundCloud:

One tune came from 2013’s Stories End, “From a Window Seat.” They threw in two numbers from 2016’s We’re All Gonna Die — “Roll with the Punches” and “Picture of a Man.” From 2015’s All Your Favorite Bands, they played “Things Happen,” and they closed their set with the title track. Dawes even went all the way back to the beginning, to 2009’s North Hills, playing “When My Time Comes,” in the penultimate position.

While Dawes drew on a range of popular material, their set felt a bit a rushed. They didn’t take the stage until about 9:30, which is quite late by the standards of a headliner at Wolf Trap. Thursday’s show included three acts: Dawes; sister trio folk-rock act Joseph (the younger two being twins), named for a small town in Oregon; and roots rock outfit Shovels & Rope, who I saw headline the 9:30 Club last fall.

Unfortunately, the show didn’t start until 7:30. When I previously saw a show at Wolf Trap with a similar three-act structure, it began wisely at 7, which gave the acts time to really breathe, to talk the crowd, and to interact with one another. It’s possible that, because this was the first time Dawes headlined a show of this size, the decision was made to have them perform for less time than another headlining band might be given. If this is the case, I feel it was a mistake. Without cutting into the other acts’ performance time, Dawes could have been given more time by starting the show a half-hour earlier.

I want to be clear that this is not a criticism of any bands that performed, as they were all terrific. (My only criticism of any the bands is that the white suit worn by Michael Trent of Shovels & Rope was just a bit *too* white for me.) My ire here falls on Wolf Trap’s management, as I believe that they could have arranged the logistics of the concert to deliver a more satisfying show. This was a good show, but with a little more time, could’ve been great.