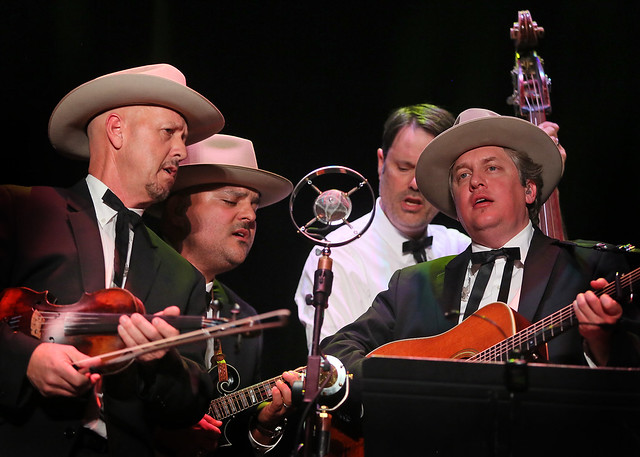 The Earls of Leicester perform at The Beacon Theatre in Hopewell, Virginia, on Feb. 27, 2015. (Photo by Tom Saunders)

The Earls of Leicester, Dobro-master Jerry Douglas’s Grammy-winning project that recreates the music of bluegrass greats Flatt and Scruggs, on Sunday played the house that bluegrass built — Alexandria’s The Birchmere concert hall.

Jerry, a member of Alison Krauss’s backing band Union Station, has a playful, delightfully cornball sense of humor, and the name of the band is a wordplay, taken from the first names of Earl Scruggs and Lester Flatts. During Sunday’s concert, Jerry poked fun at a band member’s farm, mentioning the full array of his meat products, except for horse, “because it’s illegal, or he’d sell that, too.” He also brought up their line full line of “Hamway” products, mentioning the benefits of the hair care line as applied to the band’s completely bald member.

Since the Earls of Leicester recreate historical music, it’s worth saying a bit about the history here. Guitarist Lester Flatt and banjo player Earl Scruggs founded their band, the Foggy Mountain Boys, in 1948. With various lineups, always including Scruggs and Flatt, the Foggy Mountain Boys stayed together until 1969. They were elected into the Country Music Hall of Fame in 1985 (posthumously for Flatt), and they are considered one of the most influential groups in the history of bluegrass and, more broadly, country music.

With no opener, The Earls played for a bit over 90 minutes. They alternated between songs from albums and instrumental pieces. From their self-titled debut, they played “Dim Lights, Thick Smoke,” “You’re Not a Drop in the Bucket,” “I Don’t Care Anymore,” “Shuckin’ The Corn,” “Don’t Let Your Deal Go Down,” and “Big Black Train.” They dedicated “Pray for the Boys,” from their Grammy-Winning album, Rattle & Roar, to the late Senator John McCain.

Listen to Rattle & Roar, the second studio album by the Earls of Leicester, on SoundCloud:

It always amazes me how musicians and athletes can not only perform when they’re ill, but that the real pros can completely mask their discomfort. The true greats can even be transcendent when most of us would be in bed, like Michael Jordan’s magnificent flu game in the 1997 NBA Finals. After the show, several of the Earls came out to sign, and they said that Jerry wasn’t feeling well. From his playing and his stage banter, the audience would never have known.

After the show, I spoke with a lovely woman as I waited to meet some of the band. We discussed how the audience for the show skewed older, as this is very traditional bluegrass. She was also recently at a guitar camp with her husband where Jerry Douglas appeared, and she told me that what he played on stage is only a hint of what he is capable of doing. I believed her completely, given Jerry’s reputation.

The Earls of Leicester are master players. Jerry Douglas, a native of Warren, Ohio, just a hop and a skip from where I grew up in the Akron suburbs, has won 14 Grammys. Bassist Barry Bales, like Jerry a member of Union Station, is a highly sought-after session musician. Fiddler Johnny Warren’s father Paul was actually a member of the Foggy Mountain Boys. You simply couldn’t find a better group of musicians to carry forward this tradition into the future.