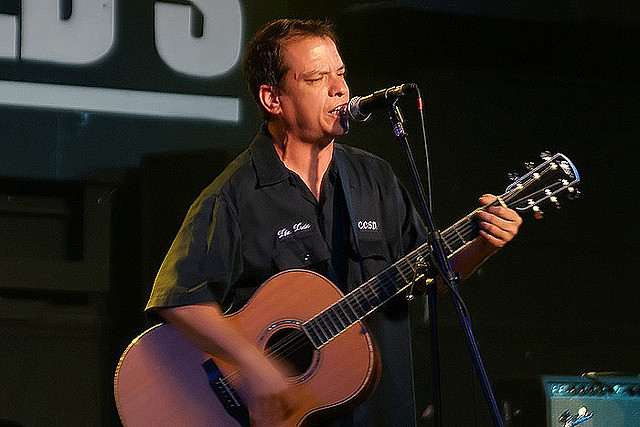 If Hank Williams were alive today, he’d be 94 years old. It’s unlikely he’d still be making music, and, even if he were, he probably wouldn’t sound very much like the young Hank Williams. On Wednesday evening, the closest you could get to a vintage Hank Williams show was seeing Wayne “The Train” Hancock perform his style of traditional country at DC’s City Winery.

As Hank’s grandson, who styles himself Hank3, has said, Wayne is more similar to Hank than either his son or grandson, although they are both excellent musicians in their own right.

Living up to his reputation as a hardworking showman, Wayne played acoustic guitar furiously, working up quite a sweat. He joked about flinging it onto the crowd, but no one got bathed in Wayne juice on Wednesday. Wayne was backed up by electric guitar, steel guitar, and bass. The band did not have drums, but the bassist did a terrific job of providing rhythm. The steel guitar, not to be confused with the pedal steel guitar — a point emphasized by Wayne — provides much of the distinctive wah-wah sound found in classic country music. The music was quite danceable, and several couples got up and danced at a mid-tempo pace; I even saw the occasional twirl of a partner.

Listen to Slingin’ Rhythm, the latest album by Wayne Hancock, on Bandcamp:

Wayne kept up a rolling banter between songs. At one point, he suggested he might take a break for a joint after the next song, but thought better of it, saying “I know it’s legal here, but I don’t trust nobody.” (Readers, an FYI: It’s not legal to smoke cannabis in public, so The Train made a wise choice here.)

Having taken the stage at 9:30, Wayne told the audience he was instructed to play a short set, and he only had 10 songs on his list, noting that it was a Wednesday. He solicited and played numerous requests from the audience, including “The Viper,” “Thunderstorms and Neon Signs,” and “Juke Joint Jumping.” Despite playing a “short set,” Wayne and his band gave the audience a 90-minute show.

After the concert, Wayne hopped off the stage and mixed with the crowd, shaking hands and taking photos. He was quite friendly, and showed patience with me as I clumsily worked my phone into taking a photo.

Wayne’s website says he just wants to entertain you, and he certainly accomplished that. This concert was a great change of pace, something different that stands out from almost anything else you’ll see and hear today.