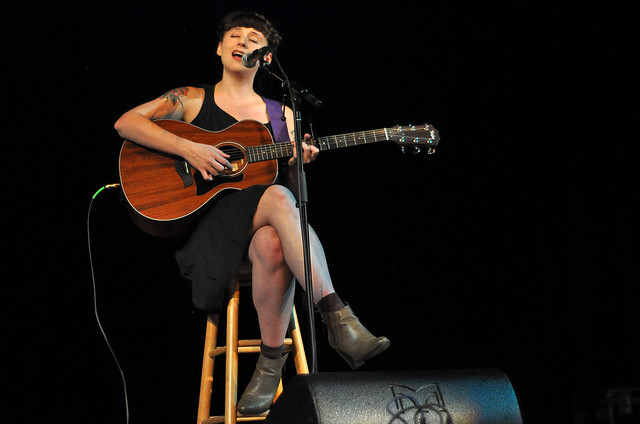 Waxahatchee performs at the Fletcher Opera Theater during the Hopscotch Music Festival in Raleigh, North Carolina, on Sept. 12, 2015. (Photo by James Willamor)

Taking the stage, Katie sat at the piano, opening her set solo. After a couple tunes on the piano, she switched to acoustic guitar. She then she brought out the two opening acts, Anna St. Louis and Night Shop, to back her up on electric bass and drums, respectively, before she finished her set alone.

The singer-songwriter, who takes the name “Waxahatchee” from the Waxahatchee Creek in her home state of Alabama, has achieved commercial and critical success. Her debut album, American Weekend, released in 2012, made best-of-the-year lists at The New York Times and Dusted magazine. Her sophomore effort, Cerulean Salt, which came out the next year, reached #1 on the Official Record Store Chart, which tracks physical sales of albums, and made critics’ top album lists at Rolling Stone, Spin, A.V. Club, and Pitchfork. Ivy Tripp, released in April 2015, received “universal acclaim.” Her most recent LP, 2017’s Out in the Storm, also landed on 10 critics’ lists.

Listen to Great Thunder by Waxahatchee on Bandcamp:

Waxahatchee began as a solo acoustic project but, over time, gradually progressed to playing and recording with a full band. As a side project, Katie had formed the duo Great Thunder with Keith Spencer, the drummer from her twin sister Alison’s band. Keith would later become the drummer in Waxahatchee’s full band. Prior to that, however, they released an LP,  Sounds of Great Thunder. As Waxahatchee, Katie decided to rework several of the songs from this album, releasing them this past Friday as a six-track EP, titled simply Great Thunder. On the EP, Katie stripped down the music mostly to just piano, reversing the course she’s increasingly taken in her releases toward fuller sounds.

Waxahatchee’s played several songs from the Great Thunder EP, including “Chapel of Pines” and “Takes So Much” as solo pieces. Most of the other songs, such as “Silver,” “Sparks Fly,” and “Recite Remorse,” off Out in the Storm, were played with backing. Whether playing solo or with backing, the real highlight of the evening was Katie’s amazing voice. You can’t fully appreciate a great singer until you’ve seen them live, and that was the case the here. I knew that I liked Katie’s singing before Saturday, but I didn’t really just how good it really is.

At the late hour of the concert, I could easily have closed my eyes and drifted away. I sincerely hope that you, dear reader, get to experience it yourself.