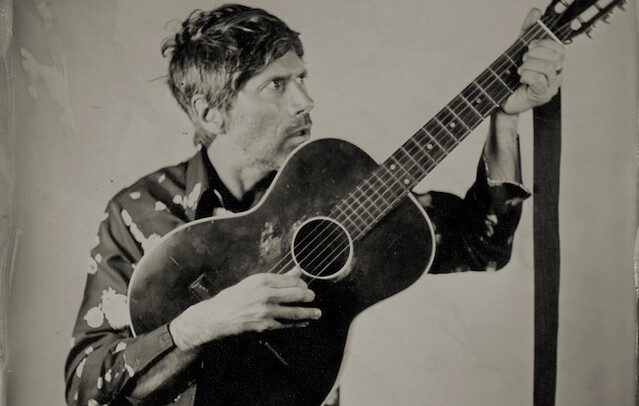 Gruff Rhys, best known as frontman for Super Furry Animals, released Babelsberg, a new solo album, via Rough Trade Records in June. The Welsh musician has embarked on a solo tour of the United States, and he visits DC9 on Thursday, Oct. 11.

Recently Gruff released a video for “Selfies in the Sunset” from the new album, and he shared a story of the song’s inspiration.

“A couple of years ago, I noticed some smiling, healthy-looking young people taking selfies in front of a particularly spectacular sunset, I turned around to walk away only to see another sunset in front of me,” Gruff said. “I realized the first sunset was just the glow looming above a chemical plant. Still, the selfies would have looked like they were taken in California. (We weren’t in California). It got me thinking about Armageddon. Maybe people will be taking selfies till the very end. They’ll be pretty spectacular and will feature the golden colors of the Sunset. With the acceleration of climate change, maybe it is the end. A slow painful process, not an event.”

Babelsberg is a real place. It’s an hour to the south of Berlin, and it’s known for hosting the location where Stalin, Truman, and Churchill met at the end of World War II. Inspired by waning visions of destruction such as that caused by war, Gruff named his fifth solo album for the city. Over 10 tracks, Gruff ponders state-sponsored murder, the numbness of the 24-hour news cycle, and delusional male egos, among other topics.

“The lyrics are all part of the same age,” Gruff says. “They were recorded before this new horror reality we find ourselves in now, but it was just a simple wait for reality to catch up with the existing rhetoric. I just felt they were a coherent set of songs that looked at the world from a similar stand point. It felt like they needed to be on an album together and maybe there was always an inevitability about the themes on the record.”