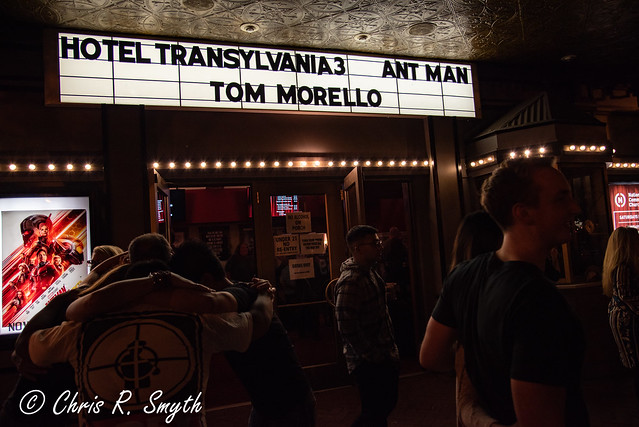 Tom Morello billed at The Miracle Theatre on Oct. 6, 2018. (Photo by Chris Smyth)

A movie theater is an unusual place to hold a concert, but very little of what happened Saturday night was traditional. Less than a week in advance of the release of his new album, The Atlas Underground, Tom Morello brought an entirely new type of show to The Miracle Theater, a venue where Tom joked about receiving second billing on the marquee to Ant-Man and Hotel Transylvania 3.

The night started with a hour-long conversation with a moderator, where Tom discussed moments from his early life through today. Tom explained major moments of his youth, like how he first became political when he was four years old because his mom taught him about Malcolm X when she wanted him to stand up to a bully in preschool. Tom talked about getting into music in high school, and he used the theater’s movie screen to project photos of himself as a young rocker.

After hitting on his college life and short-lived career in politics, Tom Morello went through his musical career as a member of both Rage Against the Machine and Audioslave, as well as his Nightwatchman records and his time playing with Bruce Springsteen and the E Street Band. During the discussion of each of these projects, Tom would take time to grab a guitar and show off, whether it was playing his guitar with an Allen wrench and revealing how he created the distorted riff to RATM’s “People of the Sun”, or playing through the soaring solo of Audioslave’s “Like A Stone,” all moments that helped shape and define him as a guitarist.

Watch a lyric video for “Every Step That I Take” by Tom Morello featuring Portugal. The Man and Whethan on YouTube:

The first full song performance of the night came when Tom was discussing his Nightwatchman days. When telling a story about his friend, the late Chris Cornell, Tom mentioned a time when Chris went missing for a long time, and he was afraid of what may have happened. During this time, Tom wrote the song “The Garden of Gethsemane”, a folksy, yet haunting acoustic song that exudes the fear he was feeling at the time.

When the discussion ended, the night transitioned into a record listening party. Tom played for the crowd the entire The Atlas Underground album from beginning to end. With each song, Tom would walk onto the stage to explain which artists he worked with and the theme for that song. He explained that the overall theme of the album is “social justice ghost stories,” with the idea to use the struggles of the past to inform the present, and light a fire toward the future. As is expected from any music that Tom Morello creates, the album is highly political and tackles subjects ranging from police killings of African Americans to suicide prevention to economic inequality to immigration and US-Mexico border crossings.

With the end of the record, Tom returned to the stage to perform yet again. Shredding his guitar over a backing track of “The Ghost of Tom Joad,” Tom sang a version that was much closer stylistically to Bruce Springsteen’s version than his own Rage Against the Machine cover. Just hours after the newest Justice to the United States Supreme Court was sworn into office, Tom made his views known during a guitar solo, flipping his guitar up to reveal a sign taped to the back that read “Fuck Kavanaugh.”

For the final two songs of the night, Tom invited everyone in attendance to join him up on stage. Playing a cover of Woody Guthrie’s “This Land Is Your Land,” Tom encouraged the fans to sing along with the chorus. With everyone still on the stage, Tom finished the night with an extreme version of Rage Against the Machine’s “Killing in the Name.” Leaving the singing to the fans, Tom shredded his guitar in the middle of everyone, and he threw double middle fingers in the air, in one final act of political defiance in the nation’s capital.