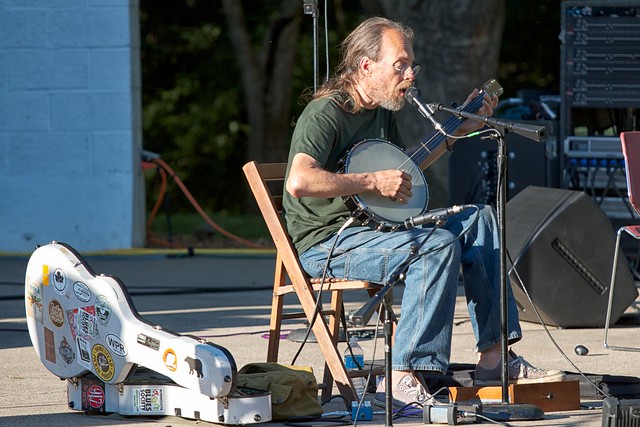 Charlie Parr performs at the Chill on the Hill Summer Concert Series in Falls River, Wisconsin, on June 12, 2012. (Phto by Andrew Iverson)

Minnesotan Charlie Parr made a stop in balmy DC for a show at the Black Cat on Friday. I saw Charlie in Black Cat’s smaller, more intimate room about this time last year, so when I saw he was coming back, I knew I had to mark it on my calendar.

It’s no surprise Charlie was back again; he tours relentlessly -– he even played 272 shows in 2016. It seems to me that touring keeps him sane and gives him joy. During the show, he talked about how before this tour, he had been sitting at home and was in a weird place mentally, and it wasn’t until he got back on the road that he felt he was figuring things out.

Charlie talked about all this in his usual somber, yet somehow humorous way. He finds ways to make you laugh without going out of his way to make jokes. When Charlie was sitting at home, he just stared at his neighbors, but never got a chance to tell them why he was staring at them. It’s these sorts of comments that make Charlie so relatable. He really is just a normal guy, with an amazing ability to tell stories through his music.

Over the course of the concert, Charlie played pretty much all of the songs I would’ve wanted to hear, including one of my favorites, “Cheap Wine,” which you can check out below. Charlie released a new album last year — an album titled Dog via Compass Records — and his witty view of the world was on display in new songs like “Dog” and “HoBo” as well.

His voice rang out in the room, and people nodded their heads to the music as he proceeded through his set. The ease with which Charlie played his guitar impressed me just as it did the first time I saw him. I can’t say enough about how gifted of a musician he is. It’s not easy to play solo as a musician and fill the room as Charlie does.

Charlie managed to do this, and do it well, with his vocals, guitar, and the addition of a kick drum thumping along to the songs. He received a raucous round of applause as he left the stage. At the Black Cat, it was clear people either knew Charlie’s music, or just really loved the show he put on.

I had a chance to chat with Charlie for a bit after the show. He stood in the back by the merch table as the main act played. It was refreshing to find that he was just as sincere and unassuming in person as he was on stage. He was happy to talk to me and seemed genuinely appreciative when I complimented him on his music. When I asked if he would be coming back soon, he replied “Oh I hope so.” I will second that statement. I hope that Charlie is back in the DMV soon. If it isn’t until next year, you can be sure I will have that show on my calendar as well.

I encourage you to listen to Charlie’s music. He has something for just about every mood you might be in, be it happy, sad, angry, or mad. I have found a treasure chest of fantastic music  in Charlie Parr’s work and what makes it even better, he’s a down to earth and friendly man. Take a listen to some of his music and keep an eye out for him coming to a venue near you.