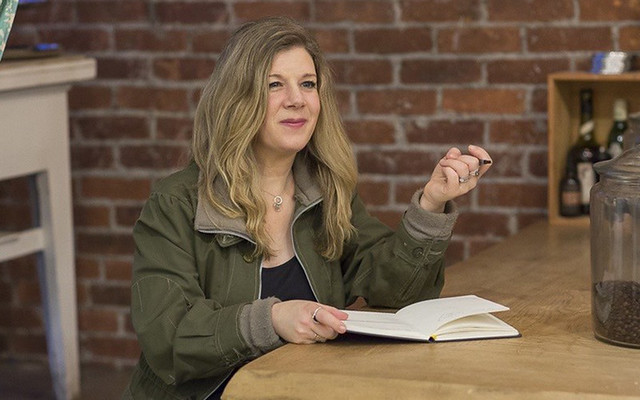 Dar took the stage dressed in black, carrying her acoustic guitar and accompanied by a pianist. She opened with a holiday song, “The Christians and the Pagans,” from her breakthrough 1996 album, Mortal City. (I last saw Dar in 2016 on the 20th anniversary of Mortal City tour.) The song told the story of a pagan woman having Christmas dinner with her traditional Christian family.

Later in the evening, Dar revisited Mortal City to play the fan favorite “Iowa.” She was joined on harmony by her opening act, by the all-female rock band Antigone Rising. Antigone Rising performed an excellent, roots-tinged set, despite their regular drummer, Kristen, being sidelined due to neck surgery. I’m sure I speak for all the fans in attendance and for all of us at Parklife DC in wishing Kristen a speedy recovery and return to the stage!

Dar explained in her very “aw, shucks” manner that some of her songs were a lot more edgy when they first came out. Some of the topics, she said, have become much more a part of acceptable conversation. That’s the case for “What Do You Hear in These Sounds?” from her outstanding 1997 album, The End of the Summer. The song discusses her experience of going to therapy, and that was still pretty stigmatized then.

Soon, Dar gave a somewhat a circuitous explanation of “The Babysitter’s Here,” from her debut album The Honesty Room. She wrote a song that turned out, oddly enough, to be about an urban planner, a strange coincidence as she has also written a book about urban planning, What I Found in a Thousand Towns. The book discusses how being in proximity to a lot of other people affects our personal development, she said. And the song shares her experiences and impressions of a favorite babysitter from her childhood.

Another standout moment in Dar’s set was the title track from her 2003 album, Beauty of the Rain. At one point, she dismissed her pianist and played about three or four songs solo acoustic. Even when she had accompaniment, it never overshadowed her acoustic guitar and gorgeous soprano voice.

For her encore, Dar went to the rollicking to “As Cool as I Am,” which also comes from Mortal City. The fist-pumping feminist anthem speaks to sisterhood and confidence — and to not being afraid of or intimidated by other women. The crowd got really fired up over this song.

Dar closed the evening with :When I Was a Boy,” also from her debut album. The song tackled genderfluidity before the concept really reached the public consciousness. Dar received a thunderous round of applause from a grateful crowd. After the show, she charmed fans and signed books and CDs. It was a lovely evening of beautiful music, and I recommend catching Dar’s show when you get a chance!