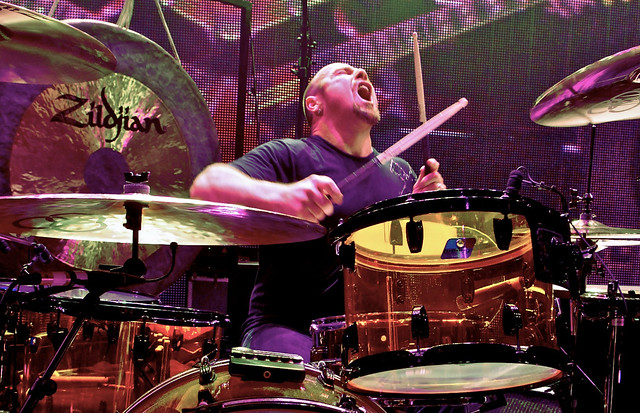 The drum kit is central to rock and roll and to the legacy of arguably the greatest band of the 1970s, Led Zeppelin. That band’s drummer, John “Bonzo” Bonham, forever changed rock drumming with his ability to synthesize jazz, blues, and funk techniques (think Buddy Rich meets James Brown) into his own unique style and integrate it with the other band members’ instruments. As Zep guitarist Jimmy Page once said, “[John was] heavy, lively, virtuosic, and deliberate… at his most brutally paleolithic he never bludgeoned dully, at his most rhythmically dumbfounding he never stooped to unnecessary wankery.”

Today’s Zeppelin fans are fortunate to have a direct descendant carrying on that iconic band’s musical tradition with his son Jason.

A quick perusal of Jason’s bio reads like rock royalty. At age 5, he was jamming on a scaled-down drum set with his Dad’s “mates.” At 17, he became a member of a band, Air Race, that released an album and opened for the likes of Queen, Meat Loaf, Ted Nugent, and AC/DC. In 1988, eight years after his father’s death, Jason was asked to fill his dad’s spot in the first Led Zeppelin reunion at the Atlantic Records 40th Anniversary concert, subsequently touring with Page and appearing on his Outrider album. By 1989, Jason’s solo career had taken off with his own band “Bonham.”

At Led Zeppelin’s January 1995 induction into the Rock and Roll Hall of Fame, he again filled in for his late father. More solo projects soon followed, with Bonham putting together “In the Name of My Father — The Zepset” featuring the songs of Led Zeppelin. The biggest moment came on Dec. 10, 2007 at the all-star tribute to Ahmet Ertegün, co-founder of Atlantic Records, where Jason performed at Led Zeppelin’s only full reunion concert since disbanding in 1980. Bonham’s performance at the concert at London’s O2 arena was described by many as “flawless.”

That concert laid the groundwork for Bonham and James Dylan in February 2009 to put together what eventually would become Jason Bonham’s Led Zeppelin Experience (JBLZE), a live homage to his father’s band. Today known as Jason Bonham’s Led Zeppelin Evening, the band features James Dylan on lead vocals, Dorian Heartsong on bass, and new member Jimmy Sakurai on guitar.

Jason spoke enthusiastically with me about JBLZE: “I play with a couple of different bands, but I love this project… it’s what the fans want. I remember getting a letter from a woman a few years ago who told me she was planning to attend a show with her father since he had grown up with Led Zeppelin. Sadly, he had a heart attack just a few days before the concert but she still came, and had the seat open next to her. This is why I do it, the music transcends generations.”

Jason continued, “This project is in its ninth year and I love it, but I like working with different artists. I also play with The Circle with Sammy [Hagar] and Vic [Johnson].” (The band also includes Van Halen’s former bassist, Michael Anthony). “We’ve got a new album coming out and plan on touring early next year.”

Indeed, other musicians have been influencing Jason since he was a teenager. Up until 1982, he wanted to race dirt bikes. He had reached #2 among dirt bike champions in the UK, and he was convinced racing was everything… until he wrecked his bike, melting a piston. It was then he told his uncle, “That’s it, I’m done. I’m gonna play drums now.”

After joining his first band, Jason remembered a mentor telling him that “you were a good drummer at 8, a good drummer at 17, but now you’re an average drummer in a rock band.” There’s nothing like a truth bomb to motivate you. Jason sought out his heroes and absorbed everything he could. Rush’s Neil Peart (whose own inspiration was John Bonham) and Phil Collins were huge influences, “After Dad, Phil was my hero.”

John Bonham was Led Zeppelin’s drummer throughout its existence from 1968 to 1980. His technique, skill, and style are legendary among music aficionados and drummers alike. John didn’t just hit the drums as hard as he could; his expertise at interpreting and flawlessly executing complex time signatures to make percussion an indispensable aspect of a song continues to astonish Led Zeppelin’s fans to this day, including none other than Jason himself, “My Dad showed incredible restraint. One of the hardest things on a song like ‘When the Levee Breaks’ is resisting the impulse to constantly play fills and cymbal crashes. In the studio, he always had that restraint.” Jason added that because in those days they didn’t use click tracks, his father played completely by instinct and “feel.”

Jason’s worked hard to carve out his own life and career, and has succeeded on his own terms. However, the family resemblance and musical similarities are impossible to ignore. Indeed, Jason’s own drumming is informed by that instinct, restraint and (talking about his Dad) “constant search to push the music to another level.” But perhaps the best way to understand Bonham’s craft is to watch and hear him perform.

In 2012, at the Kennedy Center Honors tribute to Led Zeppelin, Jason along with sisters Ann and Nancy Wilson of Heart, led a performance of “Stairway to Heaven” that, if not the best cover version of the song, is undeniably one of its most emotionally moving and heartfelt performances. With President Barack Obama, Michelle Obama, and surviving band members Robert Plant, Jimmy Page, and John Paul Jones looking on, the song reaches a crescendo that brings tears to Plant’s eyes.

Sometimes a song, even one as overplayed on classic rock radio as “Stairway to Heaven,” reaches emotional heights that transcends lyrics, melody, and rhythm — and points to the meaning of music in our lives, and how it unites generations in a common bond of understanding and continuity. At the performance’s conclusion, Jason glances skyward ever so briefly, as if acknowledging the burden, and privilege, of carrying on his father’s musical legacy.