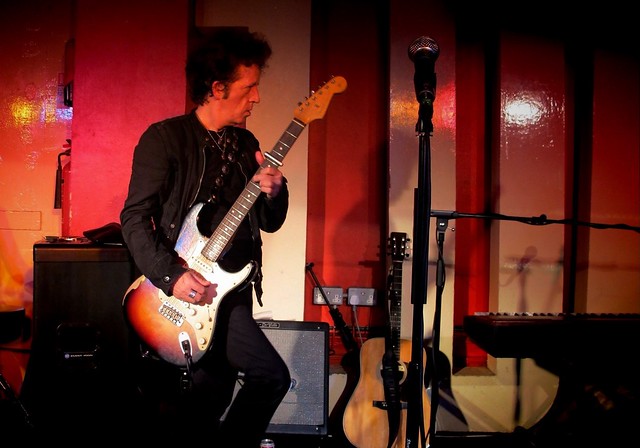 Veteran rocker Willie Nile and his band played Vienna’s Jammin Java on Friday on the heels of Thanksgiving. Spirits were already high after the holiday, and Willie and the boys put on a energetic show, filled with new songs and old favorites. Willie may be 70, but he remains youthful and energetic on stage, still brimming with rock ’n’ roll swagger, and he moves like a man half his age.

Willile’s show had two sets. Willie played rhythm guitar for most of the show, switching to piano at the beginning of his second set. He had three players with him in his band: Matt Hogan (lead guitar), Johnny Pisano (bass), and Jon Webber (drums). The drums sat directly behind Willie, in the center of stage, the bass to Willie’s left, and the guitar to his right. My mother, who attended the show with me, commented on the technical skill of the band, who were absolutely excellent.

To open the show, Willie played “Seeds of a Revolution” from his new album, Children of Paradise. He dedicated the next song, “This Is Our Time,” from his 2014 album American Ride, to women and girls.

The next four songs came from the new album. The chorus of Willie’s third song, the punk anthem “Don’t,” rang out “Don’t let the fuckers kill your buzz!” Before singing “All Dressed Up and No Place to Go,” Willie explained that he’d studied philosophy at the University of Buffalo. (He joked with me after the show that when he asked his adviser what he could do with that, his adviser told him he could go to grad school.) “All Dressed Up and No Place to Go,” Willie said, is stuffed with all kinds of references, from Big Fat Fanny to Aristotle. “What I like best about rock,” Willie said, “is it can have some content.”

Willie wrote “Earth Blues” as “if the Earth could speak.” “Secret Weapon,” he told the audience, is a love song. “I love all the songs [on the album] for different reasons,” he said, “[but] this one means a lot to me.”

Stream Children of Paradise by Willie Nile on Spotify:

After “Earth Blues,” the show got very interesting for me. My friend Michael Aarons joined Willie and the band onstage to play guitar on the title song from Children of Paradise. I knew that Michael was a big fan of Willie, but I didn’t know that he’d be playing with him. Willie explained that he used an online funding drive to pay for the production Children of Paradise, and Michael had received the privilege of playing with Willie for what he’d given to the drive.

Willie also explained the story behind “Children of Paradise,” originally recorded for his 1991 comeback album Places I Have Never Been. “Children of Paradise” is the English translation of the title of 1945 French film Les enfants du paradis. Willie explained that he saw this movie, considered the Gone With the Wind of art films, in college, and it made a huge impression on him. He strongly encouraged everyone to see if it they haven’t already.

Next, Willie followed “Children of Paradise” with “Life on Bleecker Street,” from American Ride. The last song before intermission was “Heaven Help the Lonely,” from Places I Have Never Been. Willie prefaced this song by talking about Yemen, and dedicating the song to children going to bed hungry.

After “Heaven Help the Lonely,” Willie mentioned that band hand to drink some liquid backstage, and he and the band exited stage right, to take about a 30 minute intermission.

After the intermission, Willie came out alone and sat down at the piano, stage left. “The Crossing,” recorded for American Ride, was originally written, he said, for his 2006 album, Streets of New York. The song is about the journey of the Irish to America. His second song after intermission, “Edge of the Earth,” is from his first album, 1980’s Willie Nile. Willie said that he’s only sung it live a few times.

At this point, the band rejoined Willie. Introducing the next song, “Sunrise in New York City,” from American Ride, Willie spoke about his grandfather, who was a vaudeville orchestra leader for 25 years.

After “Sunrise,” Willie got up from the piano and picked up his guitar. He told the audience that he hadn’t played the next song, “Shoulders,” from his second album (Golden Down, 1981), in years. During “Shoulders,” Willie’s guitarist played an impressive, extended solo, drawing a round of applause.

After “Shoulders,” Willie and the band played “Vagabond Moon,” the first song from his first record, 1980’s Willie Nile. Willie mentioned that “Vagabond Moon” made the top 30 in the UK. Willie followed with the title tracks of his albums Golden Down and House of 1000 Guitars (2009). Willie had the crowd singing along to the refrain of the latter (“House of 1000 Guitars”).

With the next two songs, Willie played tribute to his heroes. The band rocked out on the Velvet Underground’s “Sweet Jane,” with a scorching guitar-bass duet followed by a drum solo. Willie’s electric version of “Blowin’ in the Wind” appeared on last year’s Positively Bob, an album of Dylan covers. (When I first played Willie’s Streets of New York for my mother, he reminded her of Dylan.)

For the final song, Willie invited two young girls, I’d guess about 10 years old, and Michael Aarons, back on stage. Together, they performed “One Guitar,” from his 2010 album, The Innocent Ones. After the song, the stage cleared. Amidst applause, Willie and the band returned to play the Ramones’ “I Wanna Be Sedated” for their encore.

After the show, Willie came out to sign merchandise and meet with fans. Accessible and friendly, Willie told us that he is having a great time recording and touring now, even more fun than when he first broke out in 1980. Willie also mentioned that genes for old-age preservation run in the family: his 101-year-old father recently played golf! Here’s hoping that Willie will be around for many years, to play many more great shows!