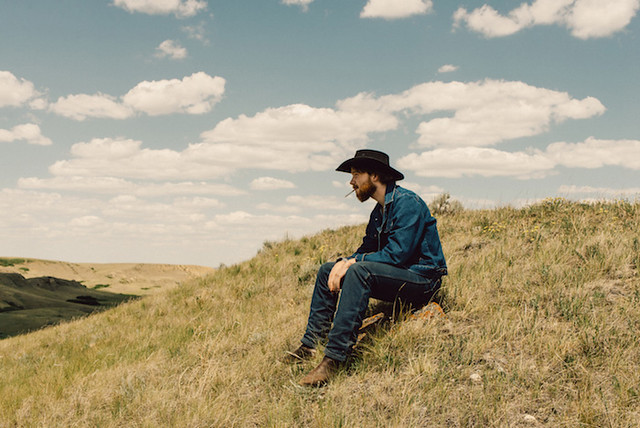 In his life, the brilliant but troubled singer-songwriter Townes Van Zandt never played the 9:30 Club. But on Wednesday, his ghost laced up his “Flyin’ Shoes” and put in an appearance at Colter Wall’s show.

Colter may hail from Swift Current, Saskatchewan, Canada, but his country-folk music is pure Americana. I never thought I’d hear Townes invoked twice in one night at 9:30 Club, by both the headliner and the opener, and see an audience sent home with Ray Wylie Hubbard’s classic “Redneck Mother.”

To be honest — I geeked out over this show. I loved every aspect of it — from the stripped down stage presentation and the opener, Texas singer-songwriter Vincent Neil Emerson, to Colter’s baritone voice. The stage dressing was radical in its simplicity: no colored lights, just basic, incandescent lights on a bare stage, and four guys with their instruments. Without the distractions of color and flash, from the balcony, I could see the band members’ hands working their instruments. One can actually see the stage quite clearly at 9:30 Club but for most bands’ lighting choices.

Although his name wasn’t invoked at the concert, the influence of Johnny Cash also could be felt Wednesday. Vincent Neil Emerson played with a Tennessee Three-style trio of acoustic guitar, electric guitar, and bass. And Colter’s vocals owe a clear debt to the Man in Black. The sparse aesthetic of the evening’s presentation had the aura of the latter-day, American Recordings era.

The concert drew a wonderfully knowledgeable and diverse crowd. At only 23 years old, Colter attracted many young fans, as well as older fans, who are often at folk and Americana shows. Walking around at the intermission after Vincent Neil’s set, I passed a beautiful young blonde woman in her 20s at the merch table wearing a Merle Haggard T-shirt. Not far from her, I spotted a man with thinning hair, likely in his 50s. During Colter’s set, I turned to the woman next to me to ask if she knew a song title. She then asked her who date, who addressed me, and he had the most beautiful dark olive skin, hair just turning silver, and a melodious accent. This was a diverse, welcoming crowd indeed!

Colter opened the show on stage alone playing “Bury Me Not on the Lone Prairie,” a cowboy folk song. Having warmed up, he introduced his new collection of songs he’s touring behind, Songs of the Plains, which he described as “about home… where men are men, and the cows are nervous.”

Stream Songs of the Plains by Colter Wall on Spotify:

The inspiration for “John Beyers (Camaro Song)” came from a story Colter heard from a friend about two guys shooting up each others’ cars. He followed that by returning to Cowboy mythology with “Wild Bill Hickock.” Colter then told the audience he learned the traditional cowboy tune “Night Herding Song” from a Rambling Jack Elliot Record. The night herd, he explained, is the cowboy in the saddle while everyone else is sleeping.

The band joined Colter — with drums, pedal steel, bass, and harmonica — for “Thirteen Silver Dollars,” followed by “Saskatchewan in 1881.” Introducing “Calgary Roundup,” Colter said that rodeo is a big deal in Western Canada, and no rodeo is bigger than the Calgary Stampede.

Colter credited extreme sleep deprivation and “The Motorcycle Song” from Arlo Guthrie’s album Alice’s Restaurant for inspiring his “Motorcyle.” “Thinkin’ On a Woman” featured the first of several soulful harmonica solos. I didn’t catch the next song title, but it was followed by “You Look To Yours” and “Kate McCannon,” and another song I’m not sure about. Then, Colter played Townes Van Zandt’s “Snake Mountain Blues,” a deep cut.

In his encore, Colter performed Ray Wylie Hubbard’s classic “Redneck Mother” — with a twist. He ever-so-slightly changed some of the lyrics: “kicking hippies’ asses” became “kicking hipsters’ asses. The crowd boisterously sang along on the refrain, “oh so well, oh so well.”

If you have the chance to see Colter Wall, don’t miss it. Folk, Americana, country, whatever you want to call it, this is just plain good music: inspired songwriting, breathtaking vocals, and an incredibly skilled, soulful band. And maybe I’m biased, because I love this type of music, but you don’t have to take it from me: Steve Earle and Lucinda Williams say that Colter has the goods.