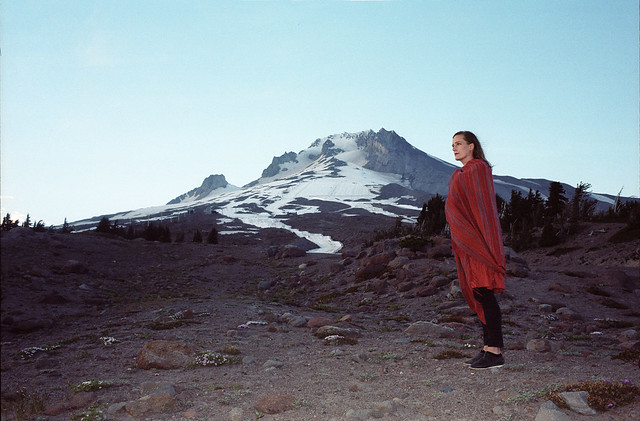 If you’ve ever seen an NPR Tiny Desk Concert, you owe a debt to Laura Gibson. In 2008, she performed on the initial episode of the series. NPR music critics Stephen Thompson and Bob Boilen had attended one of her shows, and were disappointed that they couldn’t hear her over the crowd. Bob decided to have Laura perform at his desk, and the Tiny Desk Concert was born.

Fortunately, the crowd Monday evening at the intimate DC9 did not present the same challenges to hearing Laura’s set. They were appreciative and friendly — and quiet during Laura’s set. Laura writes intricate, sophisticated lyrics, even more so now that she has completed an MFA in creative writing from Hunter College. Her new album, Goners, released last month, highlights her growing skills as a lyricist. The audience was keyed in and attentive to her words.

Laura played with a full band: drums, a bassist, and a multi-instrumentalist who played violin and keys and sang backup vocals. Laura herself played keys and guitar.

Taking the stage, Laura said, simply, “Hello.” The first part of her set consisted of her new record. She began with the lead track from Goners, “I Carry Water.” Laura played keys, accompanied by electric bass and violin. An additional player sat in either keys or synths. After the song, she told the audience, “Making songs is a thing that I do… There’s so much time spent alone in a room… We can be alone together.”

“Domestication” saw a change from electric to upright bass, and the drummer played heavy on this number. Finishing the song, Laura explained that she had a larger keyboard, but it got held up at the Prague airport, where they’d had to sprint to make their connection. In addition to the drama with keyboard, at 4 o’clock that afternoon, their drum set suddenly became unavailable as well, and they scrambled to come up with a solution.

Soon, Laura and the band played “Slow Joke Grin.” The song begins with the words, “You with the diamond hands…” She prefaced this song by saying, “I’ve written a lot of love songs. I wanted to write a *want* song.” During this song, the multi-instrumentalist only sang backup vocals.

Appropriately enough, before playing the title track of Goners, Laura mentioned that she had a new album. She also mentioned that, in Europe, people pronounced it “go-ners,” causing her to giggle every time. Because “goners” is a slang term, she encountered some very strange translations, such as “the condemned.”

On the recording of “Goners,” Laura performed with the marxophone, a fretless zither played via a system of metal hammers. The instrument, however, requires a great deal of precise and time-consuming tuning, making it difficult to play on stage, so she sampled it for her set.

Before “Performers,” Laura revealed that it was one of her bandmates’ (either the drummer or the bassist) first night, and that most of the band had first met him only a few hours ago. In a moment of self-revelation, she stated that she was extremely jet-lagged and that this was going to be “the trippiest show.” I chimed in, “It’s okay, I’m tired, too,” to which she replied, “We’re in it together.” On this song, Laura played guitar, accompanied by upright bass and violin. After finishing, she picked up her glass, saying, “I told myself I could have a few sips of wine when I got halfway through the record songs.” Laura and the band then played “Clemency.”

Laura thanked the audience for coming on a Monday, especially Cyber Monday, when they could be at home taking advantage of online shopping deals. Of note, the DC9 show and a show in New York were Laura’s only East Coast appearances. Following the NYC show, she went to her native West Coast.

Between songs, Laura said while making art might be seen as indulgent, she continues to do it because, “I myself have been saved by other people’s art, many times.” The remainder of her set came from her 2016 album Empire Builder. She began with “Louis,” followed by “The Search for Dark Lake,” then the band stepped away. Laura played “Damn Sure” solo on her guitar.

The band returned to the stage. With Laura on guitar and using a distortion pedal, electric bass, and the multi-instrumentalist keys, the band played “Not Harmless.” Before the last song of her set, “Empire Builder,” Laura presented the audience with an encore/no encore option. Predictably, the audience chose to have an encore. Singing, with her opener, Dan Mangan, playing her classical guitar, Laura covered Robyn’s “Hang with Me.” Laura closed the evening solo with “Milk-Heavy, Pollen-Eyed” from her 2012 album, La Grande.

A memorable moment occurred at the end of Dan Mangan’s opening set when he performed his closing number, “Robots,” campfire style. Members of Laura’s backing band accompanied him, and the crowd in the intimate setting sang along with chorus. It was a lovely moment.

DC9 offers an intimate experience, and this was a great concert to take advantage of that. I talked to the sound operator after the show, and she said she could tell the musicians were really enjoying themselves, which makes for a great show.