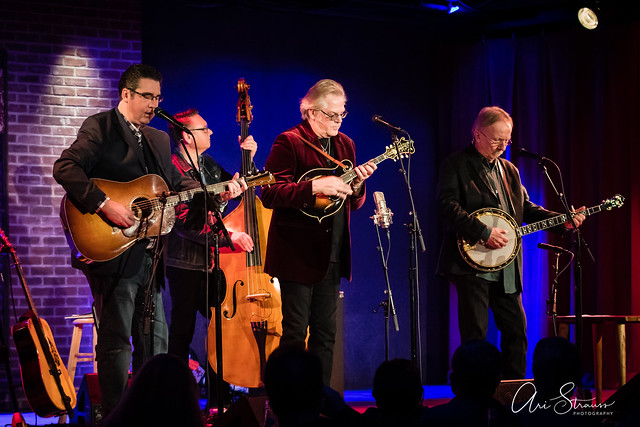 Many identify bluegrass music with the classic bluegrass music of Bill Monroe, or Earl Scruggs and Lester Flatt. While that represents the roots of bluegrass, the music has evolved, even developing into distinct styles. At City Winery DC, the John Jorgenson Bluegrass Band, J2B2, recently gave a virtuosic performance of progressive bluegrass.

The performance of J2B2 incorporated three of the four elements that define progressive bluegrass: instrumentation, stylistic touches from other genres, chord progressions, and improvisation. As a quartet, J2B2 includes less musicians than most bluegrass bands. Bluegrass bands typically include five or six players. J2B2 doesn’t have a fiddle. Progressive bluegrass may even include electric instruments. Though just as well known for their electric work — J2B2’s Mark Fain played with Ry Cooder in my top-ranked concert last year — Wednesday was completely acoustic.

J2B2 sounds unlike any other bluegrass band. They push the cutting edge of progressive style, playing what is still recognizably bluegrass while attacking their instruments with a rock ‘n’ roll fervor. Their instrumentals, especially, breathed fire, as these four masters jammed out on their first date in together in six months.

John Jorgenson, who played lead on mandolin (and a little guitar), and Herb Pedersen, who played banjo, founded the Desert Rose Band with Chris Hillman. We recently covered Chris’s appearance at The Byrds’ Sweetheart of the Rodeo 50th Anniversary Tour. In their own right, the Desert Rose Band had two #1 country hits and another five songs in the top 10. Herb wrote “No One Else” with Chris. On Jan. 2 at City Winery, J2B2 also played “It Doesn’t Matter,” which Chris co-wrote with Stephen Stills for their short-lived band’s self-titled album, Manassas.

Soon, J2B2 played “Wandering Boy” by Americana legend Rodney Crowell, who John called “one of the finest songwriters.” John told the audience that he’d spent December playing with Rodney for the Vince Gill/Amy Grant Christmas Show. J2B2 represented the Americana genre well, also playing two songs by Rodney’s mentor, the late Guy Clark, “Die Trying,” co-written with John Randall and “Bang the Drum Slowly,” written with the exquisite Emmylou Harris. “A lot of people of people talk about songs for the troops, but this song is is for the family members and friends,” said John about the latter.

Throughout the show, J2B2 reached into a variety of other genres, including country and blues. Describing “Whiskey Lullaby,” a major hit for Allison Krauss and Brad Paisley, John said, “The good thing about bluegrass music is that the music is so happy you don’t realize how sad the song is. On the next song though, the music is sad.” They also covered the late LA blues singer Jim Sullivan, who, they told the audience, disappeared mysteriously, his car found in the desert by the highway patrol.

Herb has ties to the area through his songwriting. Many years ago, he recorded a cassette that he sent to area bluegrass legends Seldom Scene. From one side of the cassette, Seldom Scene recorded “Old Train.” “Wait A Minute,” on the other side, became something of anthem for the five-time Grammy nominees.

In 1967, a young Herb joined bluegrass band The Dillards. He talked about playing the now-closed Cellar Door. When The Dillards asked Herb to write a song, he gave them “Hey Boys,” with two versions of the melody, fast and slow. They used the fast version, and he held on the slow one, which J2B2 played Wednesday evening. J2B2 also played The Dillards’ “There Is a Time,” with John, Herb, and guitarist Patrick Sauber singing outstanding three-part harmony.

J2B2 showed off its their talent as pure string players on a number of instrumentals. John and Herb co-wrote “Gina,” named for the highway patrol officer who ticketed Herb one day while he was on the way to John’s house. Herb described the officer as “tough as a steak,” resisting his pleas and offers of banjo lessons.

John’s wife frequently asks him, “Why would you need another guitar?” To which he answers, “There’s a song in it.” Introducing the instrumental “Feather,” he said, “This guitar gave this me this song.”

J2B2 is an absolute gem, an example of the very best progressive bluegrass has to offer. Their genre-blending style, with elements of rock, Americana, and gypsy jazz, invites listeners who might not normally enjoy bluegrass to give them a try. Anyone who appreciates masterful playing will fall in love with J2B2.

Here are some pictures of the John Jorgenson Bluegrass Band performing at City Winery on Jan. 2, 2019. All photos copyright and courtesy of Ari Strauss. 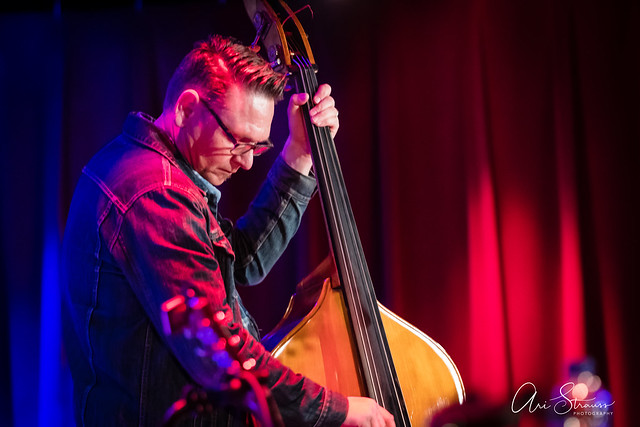 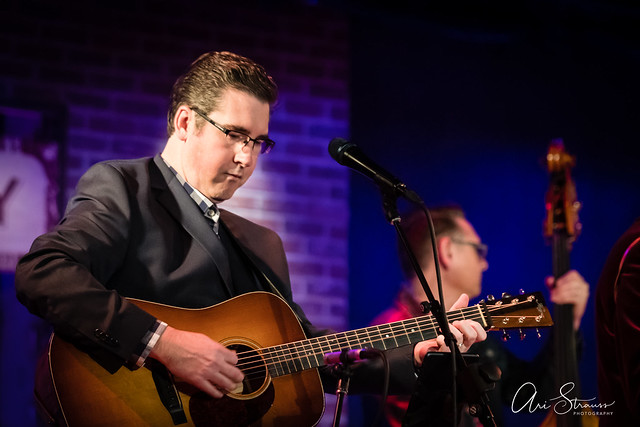 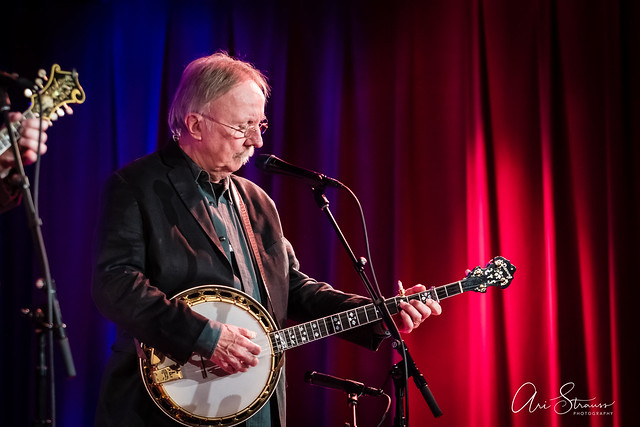 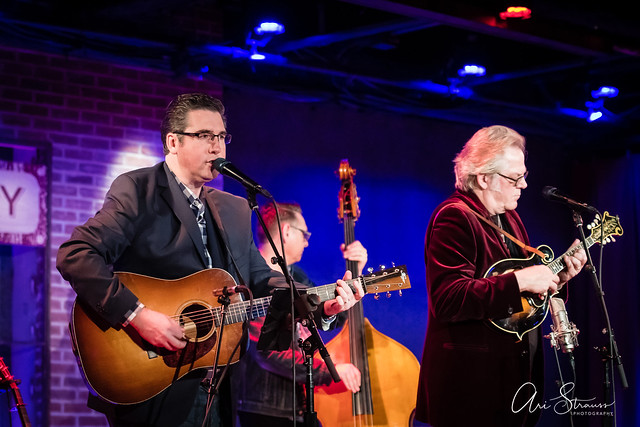 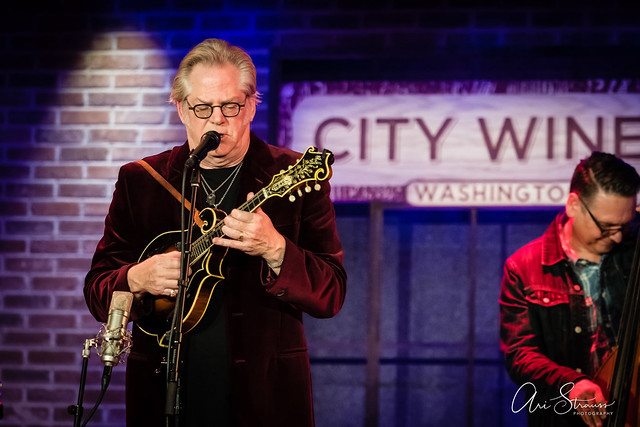 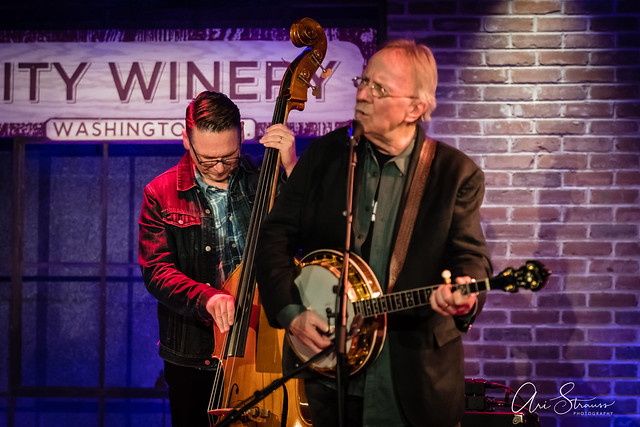 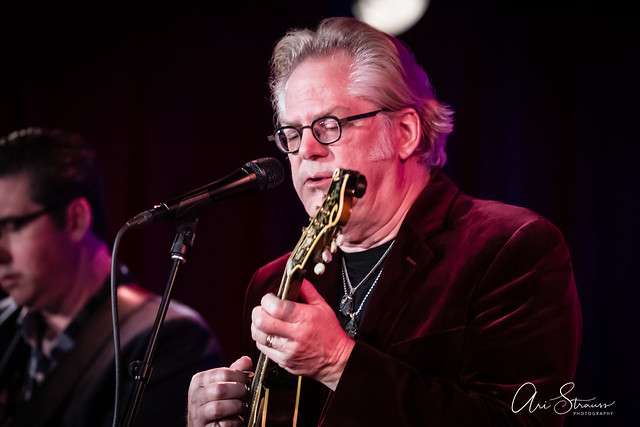 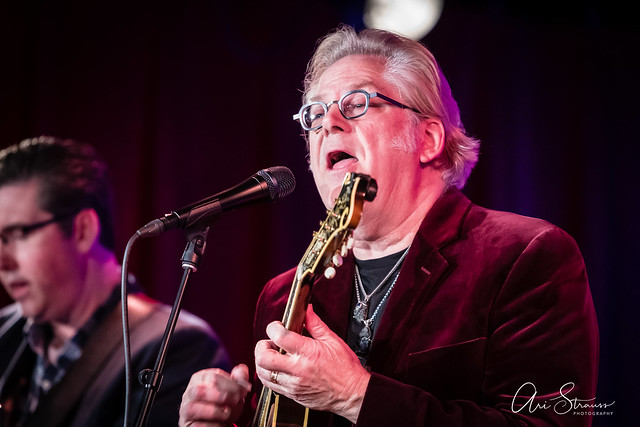 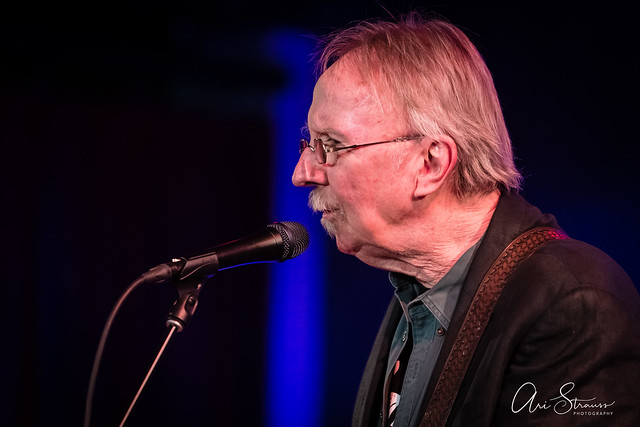 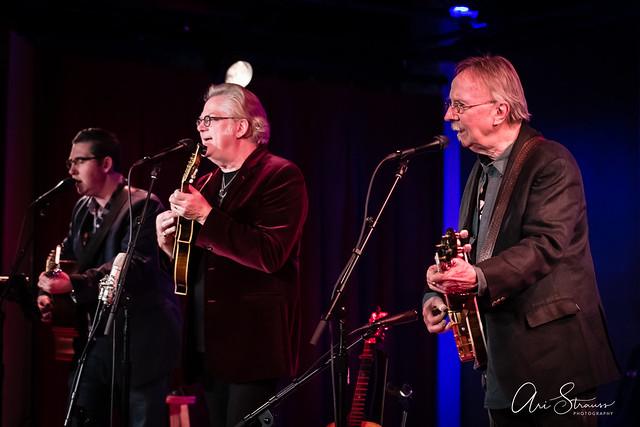 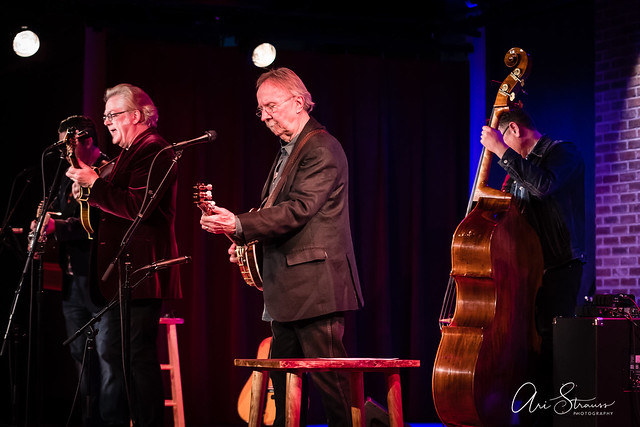 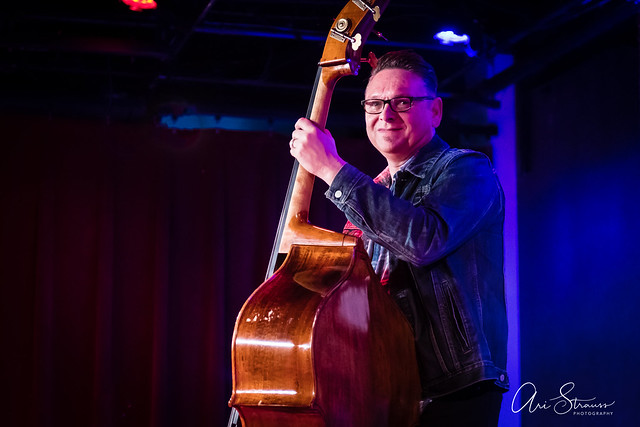 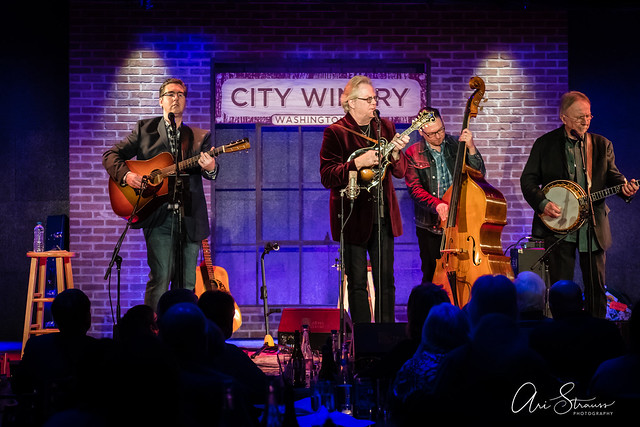 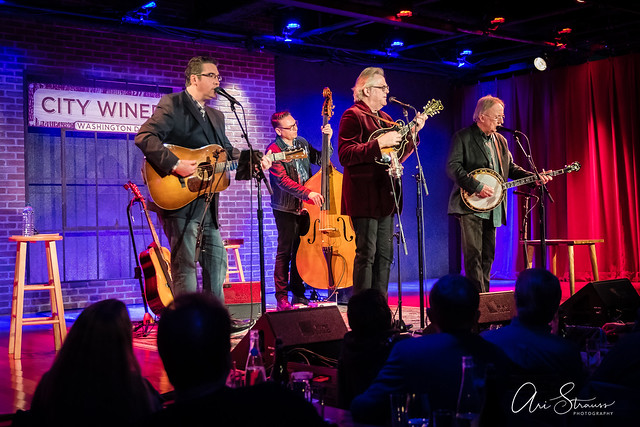 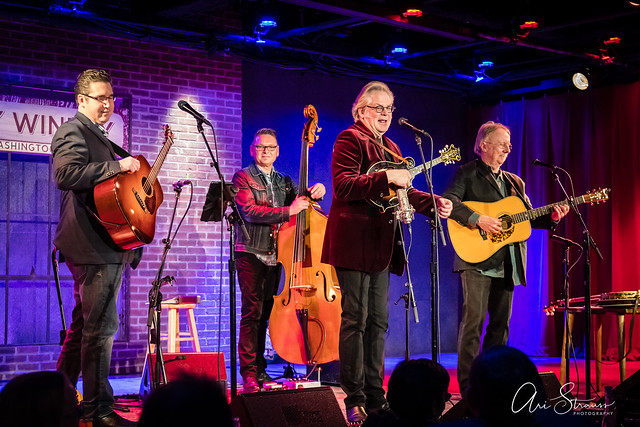 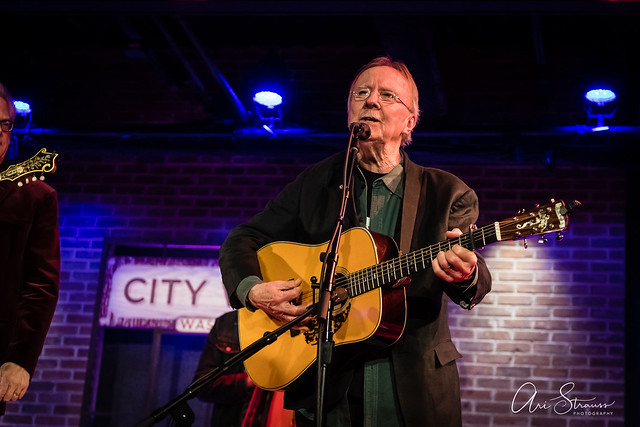 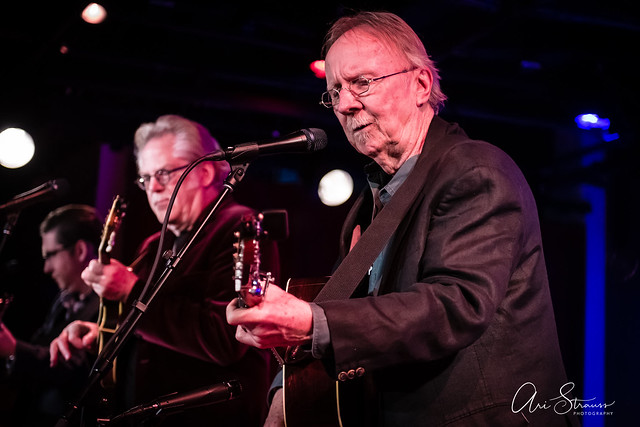 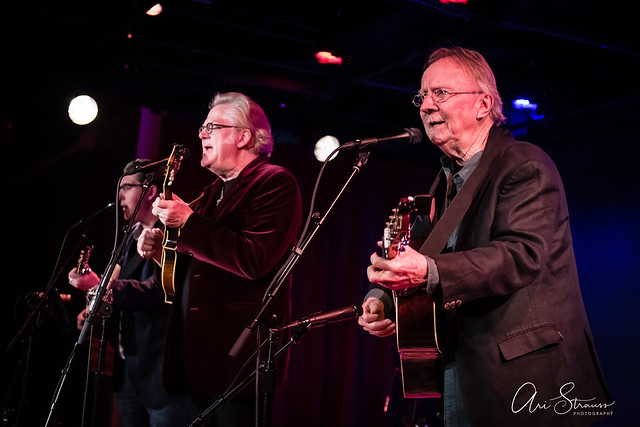 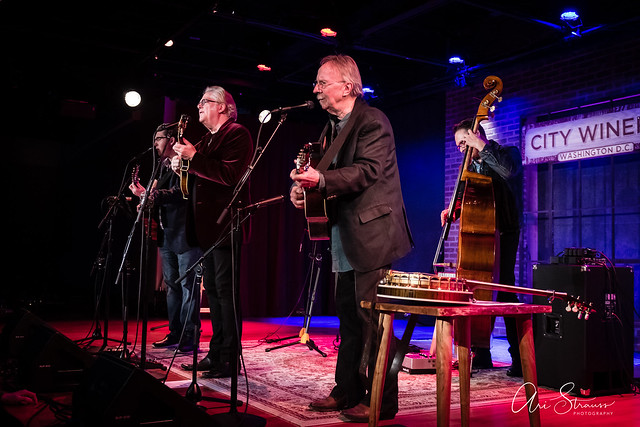