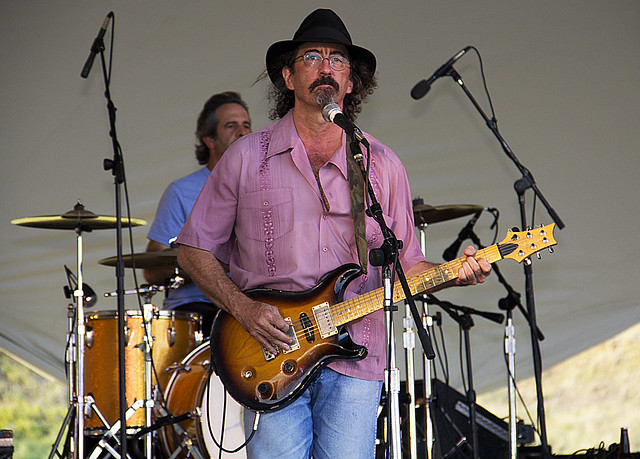 On Feb. 21, James, well-known for his songwriting, dazzled with his underrated, fine guitar-playing. The son of writer Larry McMurtry, who won the Pulitzer Prize for the Western novel Lonesome Dove, as well as the Golden Globe and Academy Awards for Best Adapted Screenplay for Brokeback Mountain, James’s songs are at once lyrically complex and intellectual while being in touch with working class themes. His music is essentially Americana, progressive while capturing regular, workaday slice-of-life.

Introducing crowd favorite “Copper Canteen,” James said, “This one here got a mention in the failing New York Times about two years ago. Somehow that paper is still going, and so am I.” The crowd applauded and hollered as James launched into the song, which tells the story of a family store that is being put out of business by a big-box retailer.

James told a story about how his great-grandfather was a Methodist preacher. His great-grandfather, according to his father, Larry, had no conception that the New Testament was written in Greek; he seemed to think that the King James Bible was the original text. This drove Larry crazy. At some point, Larry reached the conclusion that he was an atheist, but it was not enough for him to simply change his beliefs. Larry wanted an official acknowledgement of his apostasy from the church, and they obliged, issuing him a letter stating that he was no longer a congregant of the Methodist Church, which he still has. James told the audience, “I have never seen a reason to reject my father’s teachings.”

All this story was prelude to one of James’s most popular songs, “Choctaw Bingo,” which he dedicated to the First United Crystal Methodist Church. “Choctaw Bingo,” about a family reunion in Oklahoma, allows James to draw out this large, colorful family. It spans multiple states in the Mid-South, includes multiracial couples (“with his Asian bride”); but the focus of the song is really a character portrait of an elderly meth cooker.

Similarly, “State of the Union,” released as a single, talks about family tensions: “My brother’s fascist, he lives in Palacios,” the song begins.” James admitted, “while there’s usually at least one in every town, I don’t know for a fact that there’s even one actual fascist residing in or near the town of Palacios, Texas.” Unconcerned about this he said, “I work in rhyme and meter,”

Though born in Fort Worth, Texas, James grew up mostly in Leesburg, in northern Virginia. His father owned a used bookstore in Georgetown, Booked Up. In “Carlisle’s Haul,” he sings about an illegal fishing operation he helped his friends with on the Potomac.

Although his father gave him his first guitar when he was seven, it was his mother, Jo, an English professor, who taught James to play it. James says, “My mother taught me three chords and the rest I just stole as I went along. I learned everything by ear or by watching people.” After performing since his teens, James’s break came in 1987 when he entered and became one of six winners of the New Folk contest at the Kerrville Folk Festival.

Later, John Mellencamp was starring in a movie based on a script by his father, and James was able to get him a demo tape. Mellencamp co-produced James’s debut album, Too Long in the Wasteland. McMurtry’s career benefited from working on the soundtrack with Mellencamp, John Prine, Joe Ely, and Dwight Yoakam in a “supergroup” called Buzzin’ Cousins.

In 2005, James won the album and Song of the Year at the Americana Music Awards for “Childish Things.” His songs have been covered by a number of other artists, but perhaps they were meant to be! He introduced “Levelland” as “one of the Robert Earl Keen songs I wrote.”

If you’re ever in Austin on a Wednesday night, James and his band have a residency at the famed Continental Club. It doesn’t start until midnight, but it’s worth staying up to hear this fantastic artist.